This activity produced some good solutions.

Pooja at at the International School in the Seychelles sent this message:

To get my answer I used the two times table.  When there were two kids my answer was three.  Then I used the five times table when three more kids came along.  I said that if each child gets one and two leftover it must mean that the answer must be seven.

Adelle and Amanie, also at the International School in the Seychelles wrote:

With two people it must be odd.
With five people, we know 7 works.
We tried adding 5 but it came to an even number. Then we added 10, it always works.

Children from Culgaith School in the UK sent in the following:

Nathan said that the answer has to be an odd number as it is shared between two children with 1 left over. We found the first solution was 7 - Emma said this. We then tried to find out if there were any other answers. We tried 8 - but then realised that this was an even number so we looked at 9 - too many left over. We looked at 11 - this time too few left over.

Alex  suggested 17 - why did he choose this? He said the numbers were "basically the same".  Mr Dodd said this wasn't quite true as he would rather have 17 chocolate bars than 7!

Millie said that the 10 lollipops different between 7 and 17 would give each of the two children two lollipops each and so 17 would work.  We checked this out and it did! We then used the number square to show us all the solutions up to 100 - they all end in "7".  We worked out that this was because the tens digit would alway share out evenly between 5 children and the 7 would give each child 1 lollipop and have two left over.

Daniel, who didn't say which school he goes to, also agreed that the numbers all end in a 7.

If the two children end up with one lolly it must be an odd number of lollies. Then 3 more children come making the total number of children 5. Say they had 1 lolly each when they shared them, the number of lollies would be seven because 1 times 5 is 5 add on 2 for the left over ones and it makes seven.

If we carry this on to 10 lollies each it shows:

You can see here that it goes up in 5s each time. The answers that are possible are the ones where the children have an odd number of lollies.

It is most probable that they will have less than 27 lollies in their bag but this is not certain they could have 5007 lollies in the bag and 1001 each leaving two left over!

Thank you Poppy. I like the way you have thought about the practical side of the problem at the end and have decided how many lollies the children are likely to have had.

Deidre at Calgary Science School in Canada had a really lovely suggestion. Her Grade 4 class approached a similar problem they called The Candy Problem.  They posted a video of how students arrived at the solutions.  Thank you so much for that it's certainly worth watching!

Stella from Chigwell School in England wrote a very thorough account of the challenge:

Because they start off with 2 children and they share them out equally you have to divide by 2 but so that it does't go in exactly you have 1 left over which means that it has to be an odd number. But when they have just finished sharing them out properly 3 more children come along making the total of children go up to 5, so now you have to divide by 5 so it can't be any thing ending in 9, 3, 5 or 1 so that only leaves 7.


Simran from Maurice Hawk School in the USA, also had a very systematic approach. He said:

At first, I noticed that the number of lollies that I was splitting had to be be an odd number or there would not have been anything left over. So, I made this table: 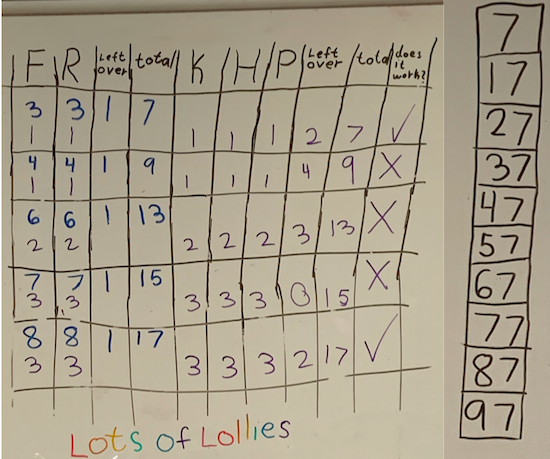 The blue shows the number of lollies that Francis and Rishi share and the purple shows the lollies that Frances, Rishi, Kishan, Hayley and Paul share. I tried a few different odd numbers and found that only a total of 7 lollies worked. Then I saw that 17 also works. Then I thought of the 100s chart and the 7s column. All the numbers in that column
would work. I checked with a big number like 87 and it worked.

I think Simran's solution links very closely with this next one... Phoebe and Alice from Cambridge used a 100 square to help solve the problem. Here is Alice's square:

And here is Phoebe's:

You can see that they have shaded all the odd numbers in brown and put a green cross through all the numbers that have 2 left over when shared between 5. They conclude that the number of lollies in the bag could be:

Well done both of you - you have shown how the number square is a very useful tool.

After working out this solution, we realised the pattern:

When the number 5 is multiplied by any odd number and has 2 added to it, it is a solution of how many lollies are in the bag.

You have expressed this in a general way, which is very helpful. Mathematicians love to generalise!

Thank you for all these solutions which were all thought about in a slightly different way. There usually is a variety of possible ways of approaching problems.