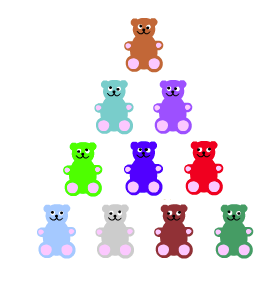 Yasmin and Zach have some bears to share. Which numbers of bears can they share equally so that there are none left over?

This problem is an appealing way to help children understand the process of division as sharing. In particular, they will have the opportunity to investigate patterns when dividing by two and thus identify even numbers and hence multiples of two.

It would be great to have some real teddies or plastic bears for the children to physically share. Although there are ten teddies pictured in the problem, the exact number does not matter.  Ideally, it would be good to have at least ten.


You could ask pairs of children to have a go at the problem, noting down on their mini-whiteboards (or shading a hundred square) which numbers of bears do share equally.

How about starting with just one bear? Can you share this one bear fairly between both Yasmin and Zach?
Show me how you are deciding.
How do you know whether that number of teddies has been shared equally?
How will you record which numbers do share fairly?

Children could investigate sharing the bears between more children and recording their findings on a hundred square in a similar way.

Pairs of children could physically share the bears/counters between themselves - this makes the problem more accessible.