Charlie's Number
"Using clues 2 and 4, we realised that our number had to be 3 digits long. Using clue 3, we initially worked out that our number need to end in 3, 5, 7 or 9. As Charlie's number is palindromic, the third and first digits need to be the same. Therefore, due to rule 5, our first and third digits had to be 3 (to make sure our number is less than 500). Finally, using rule 3, we used 8 as our second digit (to make the difference between the largest and smallest digits 5). We used the rest of the rules to check our number to see if it worked. 383 is a prime number and therefore will only have two divisors (itself and one and NOT 3)."
Tower problem
"Rule one meant we started with a yellow cube on top. We then placed a red cube on top of a green cube and placed this below the yellow - for rule two and part of rule three. We both blue cubes on the outside faces of our green cube - for rule four. Finally, we placed a yellow cube underneath the red to satisfy all the rules. Realising that "above" did not necessarily mean "directly above"/"touching", made this problem a lot easier.
We then tried to create a tower which was a single cube wide. By placing both blue cubes either side of the green cube, we satisfied rule 4. Placing a red cube above a blue cube satisfied rule two. Placing a yellow cube on the top and bottom of the tower satisfied the remaining rules."

Using the information I had, I created different numbers which were over 100 and prime. Then I checked to see whether the difference between the largest digit and smallest digit was 5. I then checked to see which of these numbers had a total of 14, very quickly I could see the answer was likely to be 383. This number has no decimal places and was odd. I tried to divide this number by 3, 7 and 9 to double check it was prime. I knew it wouldn't be divisible by 5 because it didn't end with a 5 or 0. I knew it wasn't divisable by 4, 8, 6 or 2 as it was an odd number. 383 is over 100 and under 500.

Frances and Charlie from Millfields Primary School sent in the following;

We followed the clues one by one and wrote down a number which satisfied that criteria. When we looked at the next clue, we adjusted and changed our numbers; we kept doing this until we reached the last clue. We were amazed that we had found an answer which worked for all the clues. We could not find another number which worked - everyone in our class had a go and
no-one succeeded!

I started off by listing the prime numbers from 1 to 9: 2, 3, 5 and 7. After I listed the numbers I crossed out the even prime number(s): 2. Clue number one it tells me it should be a palindromic number, so the number at the end should be the first digit as well (and possibly the second). Thanks to clue number five I knew that the number should not be over 500 therefore eliminating 7 and 5. I then knew the number had to be 3_3 or 333 but then realised the difference between the largest and smallest number must be five, from clue 3, and decided it could not be 333. So I did 3+5 which equals 8. I came to the conclusion that the answer was 383 but I wanted to check whether it would add up to 14 (3+3+8), which clue 4 mentions. The
numbers did add up to 14 meaning the answer is 383.C

Claudia and Trudie from  Maltmans Green worked in a  different way.

For the 2nd part we also had Daanya and Elodie from Maltmans, here is their work;
ï¿¼ 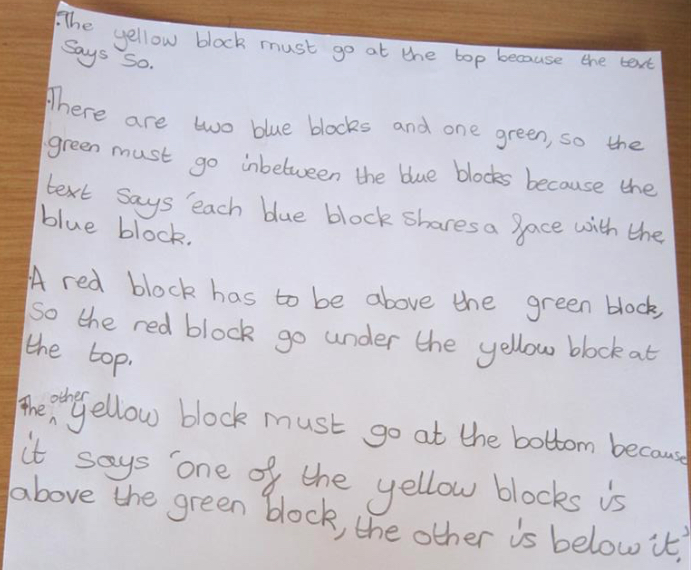 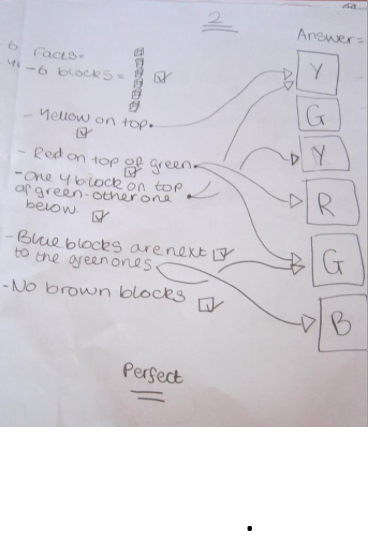 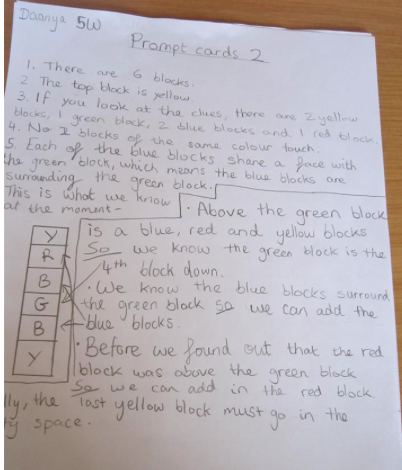 Thank you all very much for these different approaches and the excellent explanation of working.