Well done to everybody who sent in their solutions to this problem. We received lots of good ideas about the number of different ways of doing this, but most children found it tricky to create a convincing argument for why their ideas would always be true.

Ryan from Kong Hwa School in Singapore tried breaking up a few different sticks of cubes:

Natalie from North London Collegiate School in the UK took this pattern and wrote it as a general rule:

Well done to both of you for investigating this pattern. We had similar solutions sent in by: Siena, Samar and Jade from Westridge School; Bella from North London Collegiate School; Hasan, Jana and Mohammed from Abdulrahman Kanoo International School in Bahrain; George and Kai from Twyford School in the UK; Lucas and Ryan from Kingswood College in Australia; and Hope, Ellie and Bowen. Thank you all for sending in your solutions - unfortunately we don't have space to feature all of them here.

Teija from Pierrepont Gamston Primary School in the UK explained why the number of ways of splitting the blocks must always be one less than the number of blocks:

To answer the ‘Break it up!’ puzzle, I first estimated what I thought and then tested it. After working out the possibilities for different numbers such as:
5 blocks = 4
6 blocks = 5
7 blocks = 6
I realised that each answer was one less than the number of blocks used and asked myself ‘Why?’. I continued to work on more answers and my hypothesis remained the same. Then I thought about the sums and how I was splitting them, e.g.
6+1
5+2
4+3
3+4
2+5
1+6
Then I saw that there was one missing: 7+0/0+7 and thought about how that is because, if you tried it with blocks, you would not be splitting the line so that means that there would only be 6 possibilities because the seventh does not follow the rules to form two pieces. This is the same for all numbers.

Well done, Teija - this is a really convincing explanation for why the number of possibilities is always one less than the number of blocks. Prayaan from King's College Junior School explained the pattern in a different way by thinking about the joins between each brick:

Prayaan used this idea to come up with the general rule:

Some children decided that 1+6 and 6+1 should count as the same arrangement. Haleema from Pierrepont Gamston Primary School sent in this explanation:

Daisy, Eshal and Emilia from Halstead Preparatory School sent in the following picture and explanation. They found a slightly different way of describing the pattern: 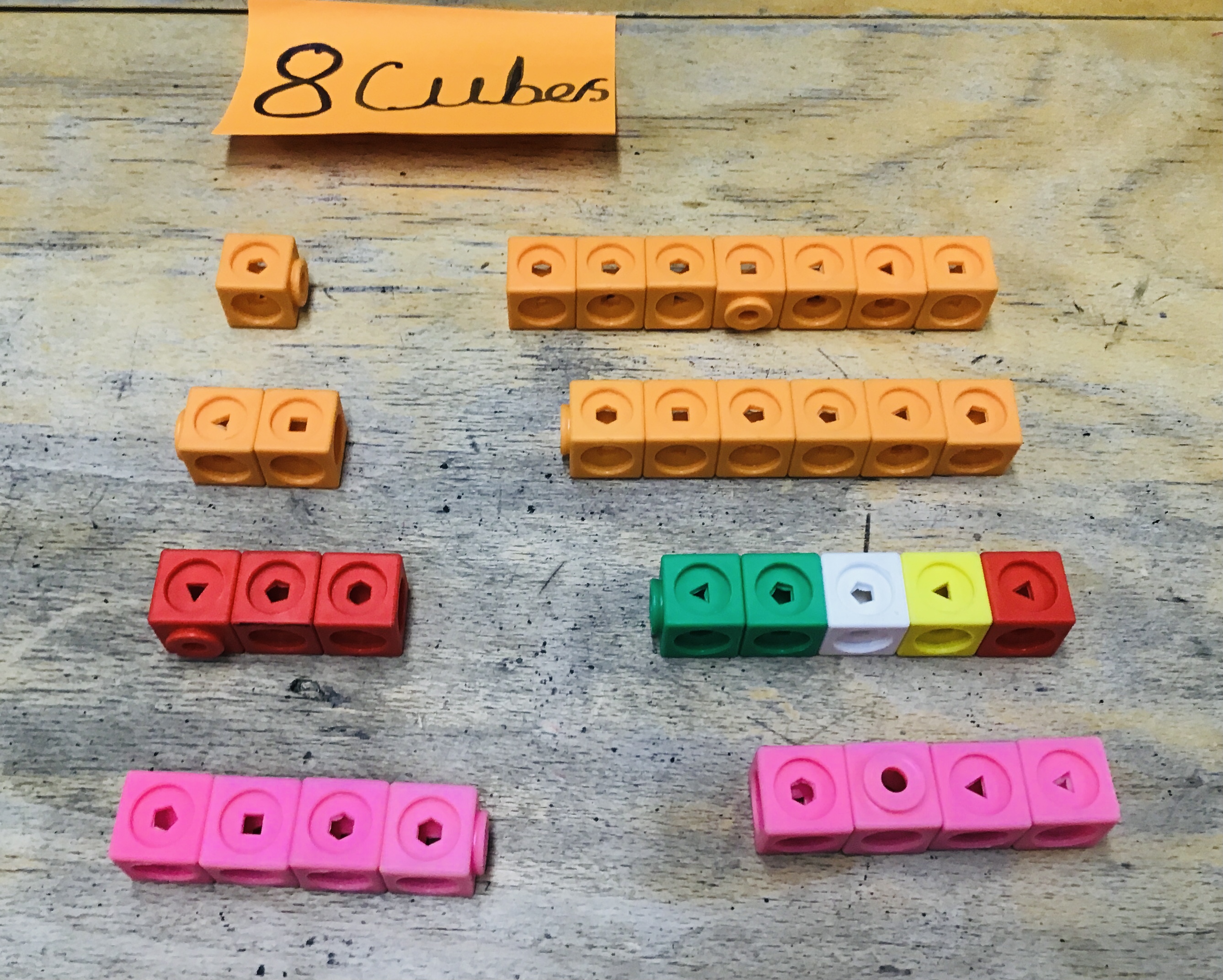 Well done to all of you for your clear explanations. We also had similar solutions sent in by Claire from Westridge School and by Dhruv from St. Anne's RC Primary School in the UK.

Ci Hui Minh Ngoc from Kong Hwa School in Singapore thought about what would happen if the cubes were split into three pieces. Have a think about this for yourself first. Are there any patterns in the numbers of combinations? Once you've spent some time thinking about this, have a look at Ci Hui Minh Ngoc's full solution to see the patterns they spotted.