A small circle fits between two touching circles so that all three circles touch each other and have a common tangent? What is the exact radius of the smallest circle? 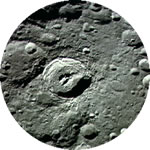 Three circles intersect at the point $D$ and, in pairs, at the points $A,\ B$ and $C$ so that the arcs $AB$, $BC$ and $CA$ form a curvilinear triangle with interior angles $\alpha$, $\beta$ and $\gamma$ respectively. The diagrams show two possible cases. Prove that, for any three such circles, $\alpha + \beta + \gamma = \pi$. 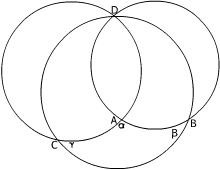 When you have done this question you might like to consider what happens on the surface of a sphere where instead of a flat surface (Euclidean geometry) you are working on a surface with positive curvature (Spherical or Elliptic geometry). See the article

'Where the angles of a triangle don't add up to 180 degrees'.


On the surface of a sphere the straight lines (lines of shortest distance between points) are great circles, the angles in a triangle add up to more than $\pi$ and the area of a triangle depends on its angles not on the lengths of the sides.