Chris and Jenny sent us some colourful diagrams to show their answers:

Julia drew on the line she'd draw to get quarters. Can you see that there are now four identical triangles? (Concentrate on the thickest lines.)

However, Anna wrote to say:
The least amount of line needed is one line dividing the central two triangles of the square in half.

I knew that the diagram had 18 triangles which is a number not divisible by 4. So I divided two triangles in half to have a total of 20 triangles which is a number divisible by 4.  At first I drew the smaller triangles at the side of the square but this did not work.  Then I divided all of the triangles in half using 9 lines giving me 36 triangles.  I successfully divided the diagram into equally sized quarters of the same shape, but this did not give me the smallest amount of line.  Once more I split two triangles in half but this time the halved triangle was in the middle.
There are lots of ways to divide the shape up into two halves. Sunita and Raj sent us two that they thought were nice:

The Maths Challenge Group at St Aidan's VC School also sent us some different ways of dividing the shape into two halves.  Here are the images they sent: 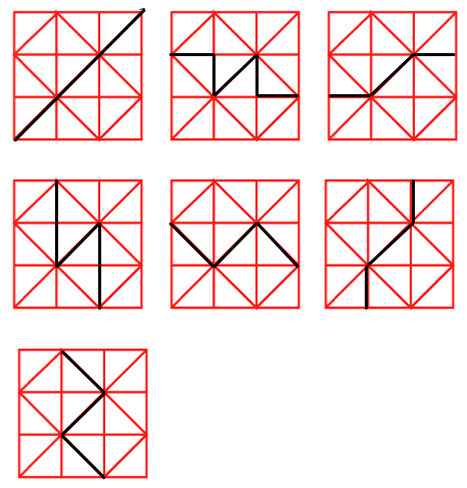 We all compared our answers and came up with these as our final results. We looked very carefully at  5 and 7, 3 and 6 in order to be sure that they were different answers not merely a rotation. We are happy with our results after our discussion.

Thank you for sharing that with us and well done everyone.
The NRICH Project aims to enrich the mathematical experiences of all learners. To support this aim, members of the NRICH team work in a wide range of capacities, including providing professional development for teachers wishing to embed rich mathematical tasks into everyday classroom practice.