Prove that sqrt2, sqrt3 and sqrt5 cannot be terms of ANY arithmetic progression.

Christopher and Atharv from Trevelyan Middle School and Scout from the UK found that 63 is polite. Atharv wrote:

Miraya from Heckmondwike Grammar School in the UK set up an equation:

David from IES Maximo Laguna in Spain found lots of other ways:

In fact, Mahdi has shown that all sums of 3 consecutive integers are multiples of 3, but there could be a multiple of 3 which is not polite! However, this algebra is sufficient, since $n+1$ could be any number, so $3(n+1)$ could represent any multiple of 3. 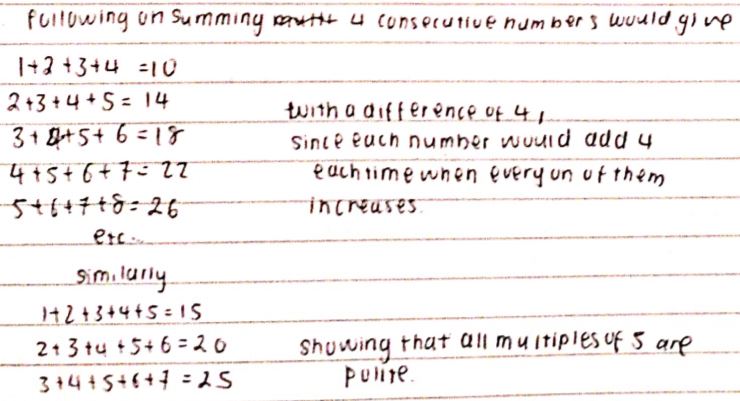 Miraya and David also came to the conclusion that multiples of 5 are all polite. Mahdi used algebra again:

One is an impolite number.

Agrim from ABQ Education Group in Oman and Jiali identified all the impolite numbers up to 20. Here is Agrim's work: 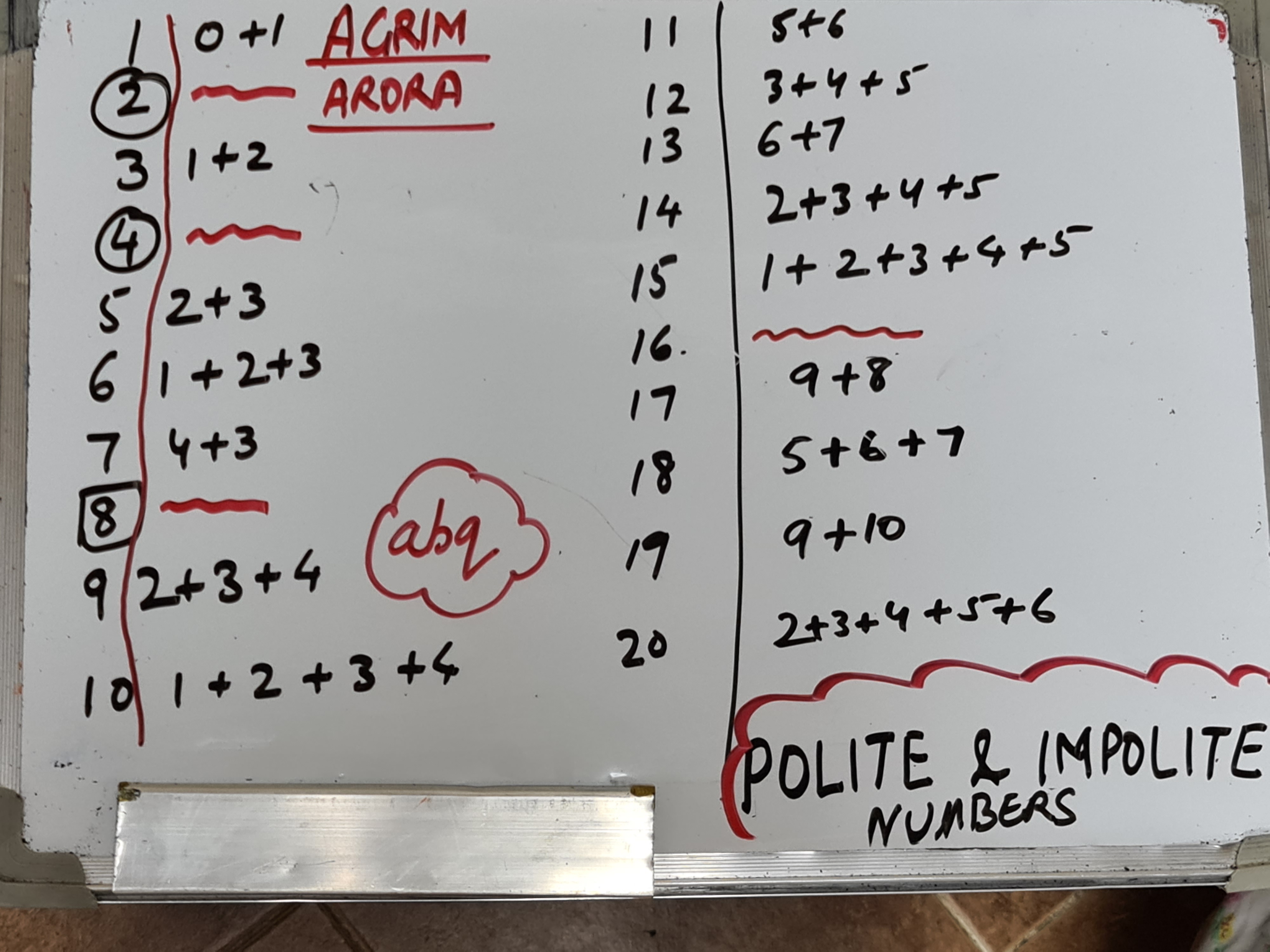 David wrote that 1 is the only odd impolite number. Jiali showed why:

Just like in Mahdi's proof, it is important to notice that not only are all the sums odd, but that all odd numbers can be written in this way (since they go 3, 5, 7, 9... it does look like they can)

Scout and David noticed something about them. Scout wrote:

2- the only numbers here could be 0,1. Two ones would form two, but these are the same number so not consecutive.

We can see that after 2 (which must be impolite since it only has one number smaller than it) the powers of two are halfway through (in for number eight 3.5 and 4.5 would add to 8 but these are not integers). I have algebraically proven this in my image.

Unfortunately, we cannot access Scout's proof. David wrote the rule that Scout described, and some explanations:

The rule works for several reasons:

2- In addition, to get the sum that results in a polite number, you have to divide that number by one of its odd factors. That factor indicates the number of numbers that make up the sum. The result of the division is the number that is in the centre of the sum. For example: 21$\div$3=7.

If this rule is not met, that factor cannot divide the polite number to obtain the sum. This is the case of using 11 to divide 33, where negative numbers would be needed to complete the sum.

5- Powers of 2 do not meet the above rules and would need negative numbers to express the sum that make them up, therefore, they are impolite numbers.

6- Finally, taking into account that the previous rules are fulfilled, we can get different sums for a polite number, either dividing it between odd factor or between even numbers until getting a prime number and use the fourth rule.

Jiali used David's ideas 2, 3 and 4 to prove that all powers of 2 are impolite: 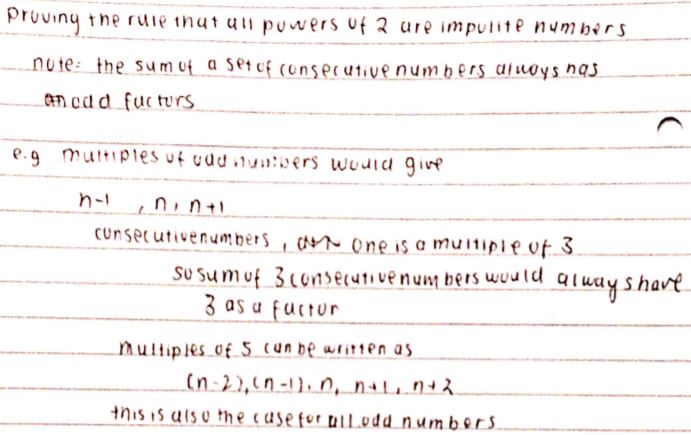 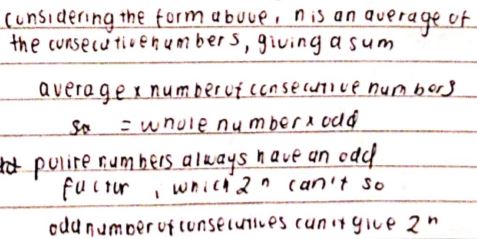 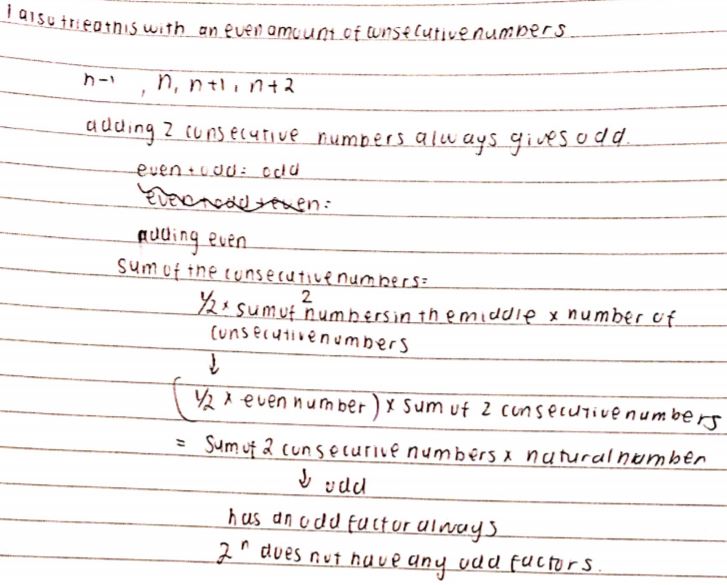 Mahdi and another David, from the UK, all proved that all powers of 2 are impolite using a formula. This is Mahdi's work, which begins with two proofs of the formula: 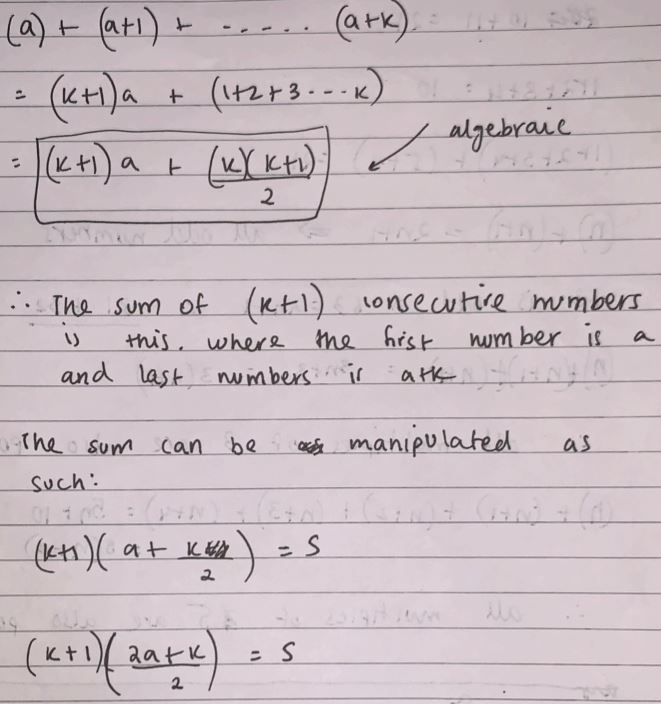 (by parity, we mean "even or odd-ness", so if two numbers have opposite parity, then one is even and the other is odd)

Sanika from PBBMS, OMR in India also proved that no power of 2 is a polite number:

Actually, this should be the other way round: If $t$ is a polite number (Sanika's initial assumption), then $2t$ can be represented as a product of $2$ numbers with an odd difference (what Sanika has shown from the initial assumption).

Therefore, all numbers with a totally even factorisation i.e., powers of 2, will make up the group of impolite numbers. All other numbers will be polite.

Sanika and Mahdi have proved that all powers of 2 are impolite, because their proofs began with a polite number called $t$ or $s$ and showed that $t$ or $s$ couldn't be a power of 2. However, the final assertion that all other numbers are polite was only proved successfully by David from the UK: 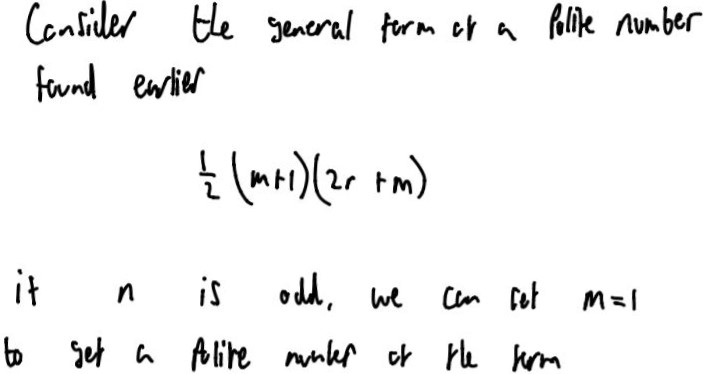 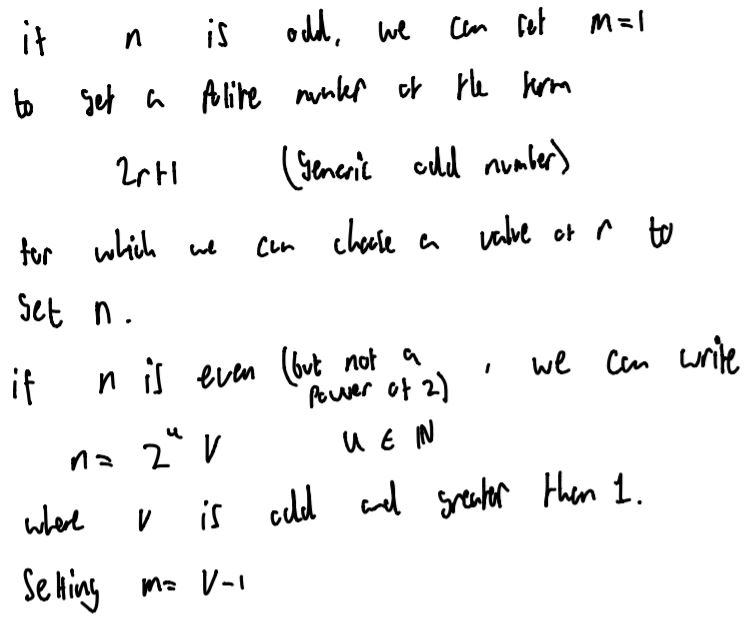 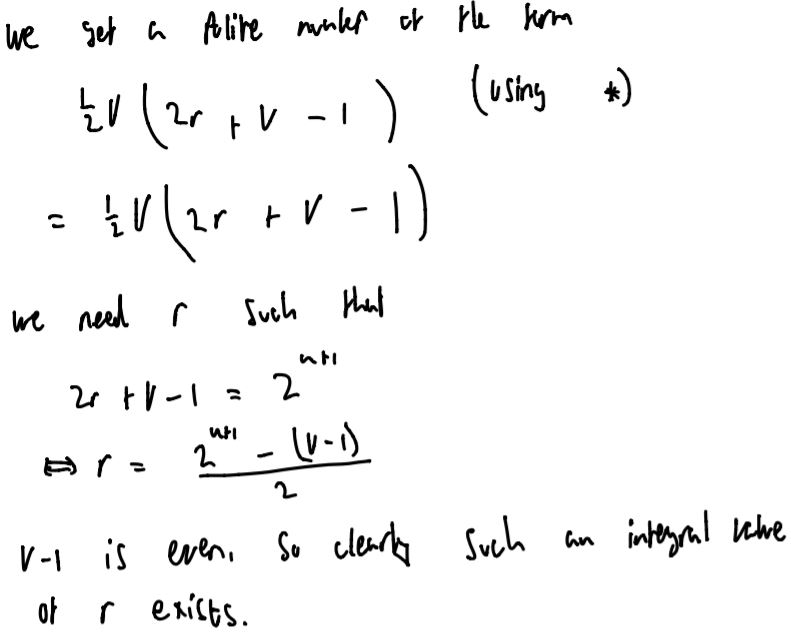