Shawn from Lanesborough School sent in this solution: 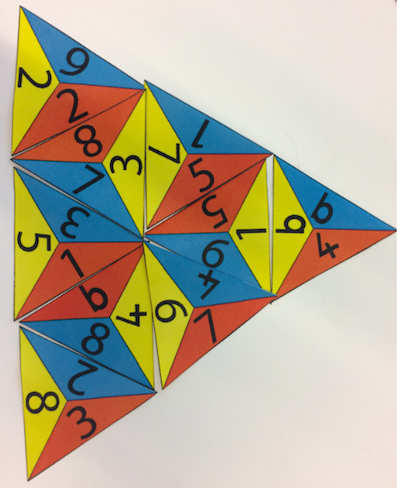 Step 1/ Put all the triangles in pairs to ten
Step 2/ Put all the red numbers together to make 10, do the same with blue and yellow
Step 3/ Make a hexagon, then the last three put them on with the coloured pairs.
Step 4/ Celebrate and write your maths down.

Rowling Class from Manor School sent in the same picture and wrote:

Some of our class found it easy to start with but harder as you had to match two sides of the triangles at once. One group got stuck and had to start again with a different triangle.
It was really important to know your number bonds to 10. We used 10 - 7 to find out that we needed a triangle with a 3 to match with 7.
We were not surprised by the fact we found lots of different solutions.
Sophie managed to match one with colours as well as number bonds!

We also received our first solution from China in Chinese! Ma Xueying sent in this image which is the same solution as Shawn, Ryan and Rowling Class above:

The translation of the Chinese shows a very interesting approach and can be found here.docx or here.pdf. 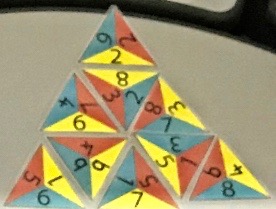 We worked together and figured out how to make the numbers equal ten and make them into a triangle.
- we remembered our friends of 10
- we put the numbers together
- when it didn't make a triangle we pulled the triangles apart and started again.
When we finished we checked we had made a triangle and that the numbers equalled ten.
Cruz, Maddix, Lillah and Zak from Burke Ward Public School in Australia found the same solution and wrote: 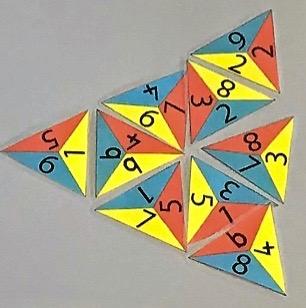 We saw that they all make ten and it looks like a triangle. We didn't worry about the numbers, we focused on the triangle shape first. Then we sorted out the numbers by ten and making a triangle. We turned the little triangles around to make it. Sometimes we had to try again.
We knew when we were done because then we checked that we had a big triangle and the numbers touching were making their friends of ten. 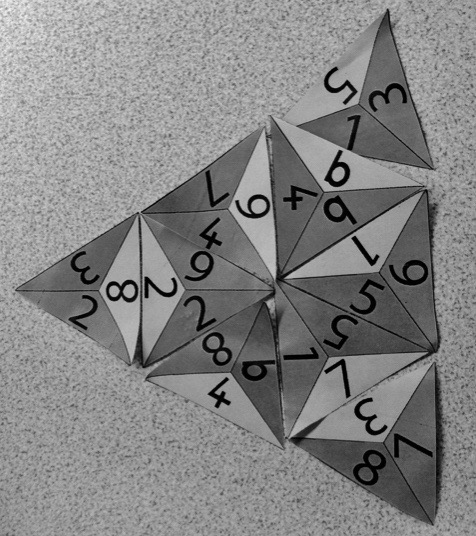 Aidan started at the top. I worked my way down until it made a big triangle. When you're making the triangle, if one piece has 8, you need to find another piece with a 2. Sometimes there are multiple pieces with 2 on them so I looked carefully at the other numbers on that piece to see which would fit best. I kept going until there were no pieces left. Jimmie helped to work out the number bonds using his fingers to make sure the number bonds were correct.
Alicia started at the bottom. I worked my way up and I found the right numbers for the number bonds. Sometimes I didn't have a piece that would fit, so I had to swap it with a piece already on the triangle.

Victoria, a teacher from Broadfield Academy in the United Kingdom, described her approach:

- First, I lined all the triangles in a long line playing with different combinations. I cut the line at various points to attempt to stack the triangle from bottom to top. Unsuccessful.

- Then, I looked for tiles with duplicate numbers and used those as a starting point in the middle of the triangle, then on the edge to exclude them from use. Unsuccessful.

- I noted which numbers appeared least frequently (e.g. 5). I used this starting point and moved tiles around the pair of fives. As it began to take shape the colour pattern confirmed I was on the right lines.

I found the solution after an hour of trial and error.

She felt it was great for revising number bonds to 10 and developing problem-solving and reasoning skills, and resilience!

Thank you all for sharing these different solutions. I wonder if there are more different solutions?
The NRICH Project aims to enrich the mathematical experiences of all learners. To support this aim, members of the NRICH team work in a wide range of capacities, including providing professional development for teachers wishing to embed rich mathematical tasks into everyday classroom practice.