Take any prime number greater than 3 , square it and subtract one. Working on the building blocks will help you to explain what is special about your results.

In how many ways can the number 1 000 000 be expressed as the product of three positive integers?

Another well attempted problem with solutions from Mary of Birchwood High School, Sana, Jenny, Chris and Rosion of Madras College, St. Andrews, as well as Andrei of School 205 Bucharest and Chen of the Chinese High School, Singapore.

To write this as the product of its prime factors:

Andrei from "Tudor Vianu" National College, Bucharest, confirmed that $100!$ Has $24$ zeros are at the end of this large number. He then provided an excellent table which he could then use to see that the first digit to precede them was $4$ 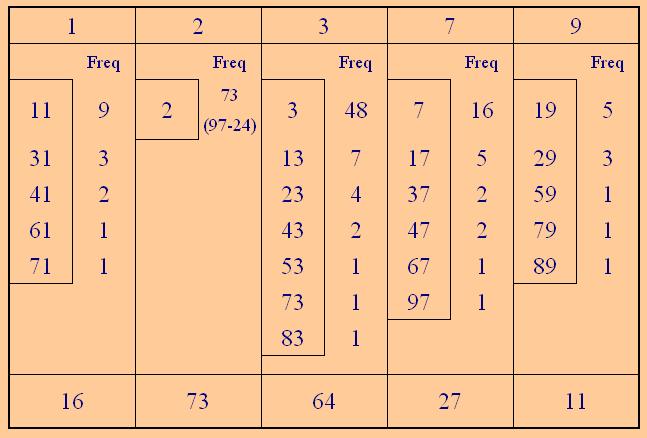 Here's how this table works. There are a lot of prime factors in $100!$ but Andrei has organised the data so that counting them isn't too hard.

Which of all those factors will contain a prime factor of three?

Which will contain a second prime factor of three?

which will contain a third prime factor of three?

Find that "$48$", showing the frequency of the prime factor of three, in Andrei's table.

The fives have all been used up getting the zeros.

There are only $25$ prime numbers smaller than one hundred so checking isn't too big a job, and the bigger numbers involve almost no work so don't be discouraged.

Now the smart thing about Andrei's table is the way the numbers are arranged.

It's the final (units) digit that we are interested in so it's only the last digit we need to consider. For example the prime factors of $11, 31, 41, 61,$ and $71$ will all have the same effect on that last digit. Look down the other columns in the table to see similar groupings and the frequency total at the bottom.

Now all the ones will create a final one.

Numbers ending in $3$ will form a product whose final digit will depend on how many numbers were multiplied but will follow a cycle of $3, 9, 7, 1$ then $3$ again. So with $64$ numbers multiplied the final digit is a one.

Reasoning likewise the numbers ending in $7$ have a product ending in $3$, and the $11$ prime factors ending in $9$ will produce a final digit of $9$

The twos follow a cycle and the last digit of their product is $2$.

Finally the product of all those last digits has a last digit of $4$, so $4$ is the digit that immediately precedes the zeros.