What do you notice about these families of recurring decimals?

Josh from Winchcombe School in the UK, Mahdi from Mahatma Gandhi International School in India and Sanika P also expressed $0.\dot2\dot5$ as a fraction. This is Sanika's work:

Jacob from Acland Burghley in the UK, Dylan from Thomas Starr King Middle School in the USA and Sanika P all described a general method for writing decimals like this as fractions. Dylan wrote:

Let's call this decimal $x.$ If all of $x$ repeats, like $0.\dot1\dot5,$ then multiply $x$ by a multiple [power] of $10$ so that $1$ repetition of $x$ is on the left of the decimal point. Now subtract $x$ from that value and now $x$ should have a coefficient equal to a whole number. Divide the whole number by the coefficient of $x$ and you have a fraction.

Jacob wrote a method which almost jumps straight to the answer:

And Dylan added a short cut to jump straight to the answer:

This all can be shortcut by taking one repetition and putting it over a number made of $9$s with the same [number] of digits, I.e. $0.\dot3\dot2$ equals $\frac{32}{99}.$ Of course if you need to explain how you got your answer then the method above shows each step.
See the problem Tiny Nines for more on this idea

Sanika P and Mahdi also expressed the other recurring decimals as fractions. This is Mahdi's work: 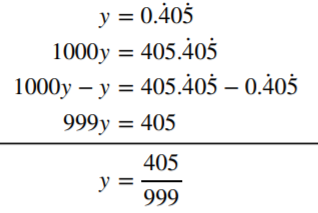 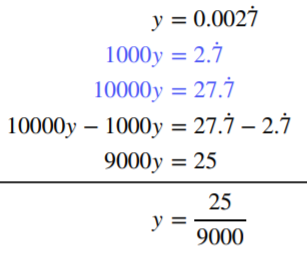 Luke, Dylan and Sanika P all described a general method for recuring decimals like these. This is Sanika's method:

Sanika also used a slightly different method for one of the examples:

If not all of the decimal repeats, like $0.8\dot3,$ then the process is slightly different. Let us still call this decimal $x.$ First you need to multiply $x$ by a multiple [power] of $10$ so that the part that does not repeat is on the left of the decimal point. Now subtract $x$ from this value. You should get a number that has a few decimal points but does terminate. Let us call this value $y.$
(Note that you might need to multiply by a different power of $10$ to make sure that the recurring digits line up)

Now set up an equation with the $x$ multiplied by the [power of $10$] on one side and $x+y$ on the other. Solve this equation to find $x$ as a fraction. You may need to multiply the whole equation by a value equal to $1$ to remove any decimals from the fraction, or simplify. 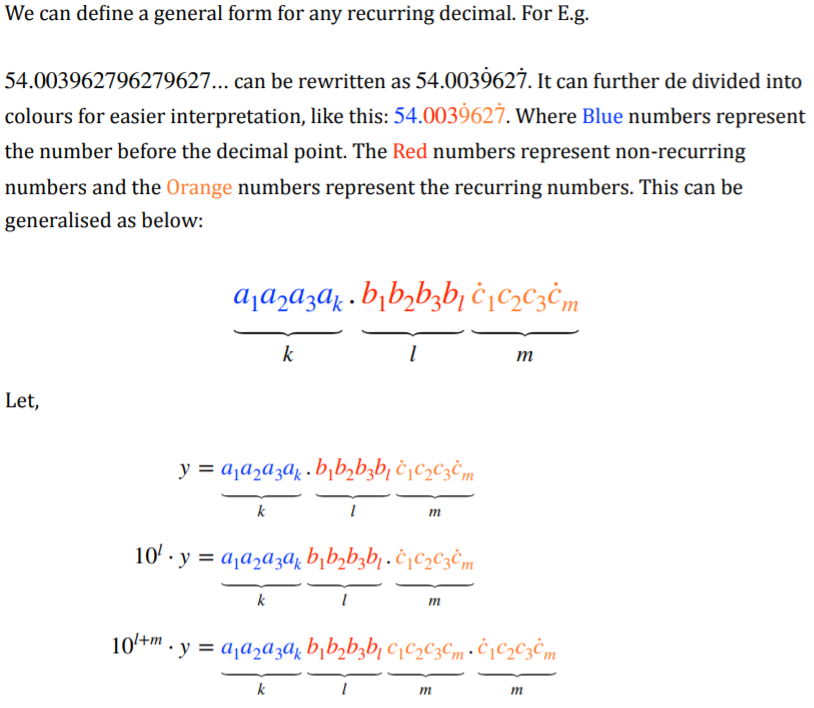 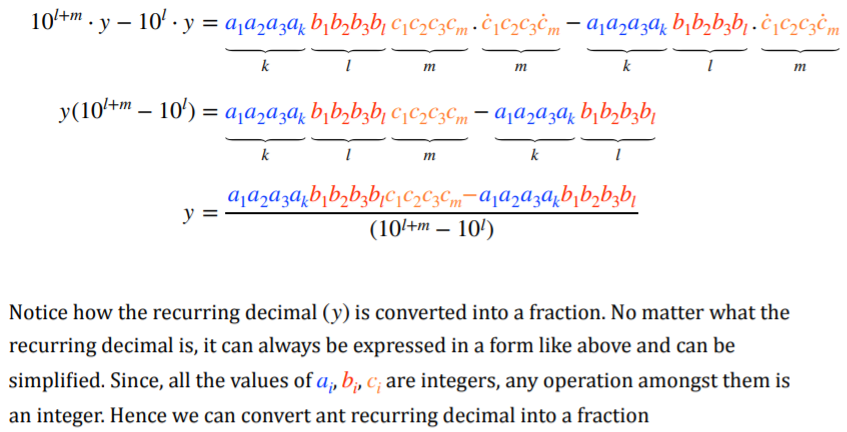 ThÃ´ng-sahge from Tiffin School in the UK and Mahdi also used another method to convert the recurring decimals into fractions. ThÃ´ng-sahge also described the process which led to the algebraic generalisation like Mahdi's (above) - linking up the two methods. This is some of ThÃ´ng-sahge's work:
Method 2: Using $S = \dfrac{a}{1-r}$
(This is the formula for the sum $S$ of an infinite geometric series, where the first term is $a$ and the common ratio between each term and the next is $r$)

Though I could have stopped here, I wondered whether there was an underlying pattern.

I tried more examples, and I then noticed, in my example,

Which is the same as Mahdi's result.