There are to be 6 homes built on a new development site. They could be semi-detached, detached or terraced houses. How many different combinations of these can you find?

Luis, Mason and Diego from Buckeye Elementary School in Arizona, USA sent in the following 3 solutions:

Children:2 Starfish:1 I did this because some species of starfish have more arms than other species
  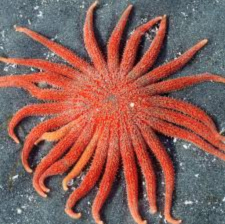 Navdeep from Great Oaks Elementary School in Texas, sent in:


Isabel from St Swithun's Prep School wrote about how to go about solving the task:

Isabella from York House School in Canada sent in the following:

We first figured out that the number of starfishes' legs have to equal an even number so that each human would have 2 arms. Then we did 5x4=20 and 28-20=8 and 8/2=4. I found other solutions by making a table.
 

Henry from Abbots Ripton sent in the following explanation:

Lauren and Violet from Westridge School for Girls in Pasadena wrote a good explanation:

Saya and Micaela from the same school said:

First we started with the number of arms, and we figured out that for the starfish we would have to have a multiple of five. So, then we knew that each of the humans would have a multiple of two. Then we took eight away from the 28 and divided the eight by two (for each of the humans). We got four.
Then we used the remaining 20 and divided that by five (for each of the starfish) and we got four. So our final answer comes out four humans and four starfish.

Thank you for these solutions, I just wonder how many different solutions there are for some different totals?
Generalising. Working systematically. Addition & subtraction. Factors and multiples. Combinations. Investigations. Comparing and Ordering numbers. Games. Trial and improvement. Multiplication & division.
The NRICH Project aims to enrich the mathematical experiences of all learners. To support this aim, members of the NRICH team work in a wide range of capacities, including providing professional development for teachers wishing to embed rich mathematical tasks into everyday classroom practice.