My number is both a multiple of 5 and a multiple of 6.
Heleen, Luna and Elise from International School of Brussels in Belgium, Christie and Hannah from Peak School in Hong Kong, Hugh from Australia, Zain from Kings Al Barsha in UAE and Laiba from Uphall Primary School in the UK found possible numbers. This is Christie and Hannah's answer:
The number could be thirty, because five and six are both [factors of] thirty. Another answer it could be is sixty or anything that is a multiple of thirty. A rule that we found was that the answer had to end in a zero because there is no multiple of six that ends in a five, and multiples of five have to end in a five or zero. So we knew that the answer had to end in a zero.

Sofia from International School of Brussels used a different method:
It was easy to find this because I just had to multiply 6$\times$5 or 5$\times$6 and I know it's a multiple of both.

Christian from Dulwich College Seoul in South Korea, Shriya from International School Frankfurt in Germany, Majid from Little Ilford School, Aishwarya from Hymers College Junior School, Sam from Banwell Primary School and Justin from Uphall Primary School, all in the UK, used the lowest common multiple. This is Justin's work:
Multiples of 5: 5, 10, 15, 20, 25, 30, 35
Multiples of 6: 6, 12, 18, 24, 30, 36
The first common multiple is 30.
You can work out other answers by multiplying 30 [by] any number.
For example: 30$\times$4=120
120 can be divided by 6 and 5.
The smallest answer will be 30 because there is no other number, that is in the 30 times tables, that is smaller than 30.

We explored the patterns and started with the multiples of 5 as this was the easiest. We were almost tricked by 160 but we had to recall our times tables to help us.

We predict 240 would be the next one.

Hannah and Christie used the same method they had used before:
The number could be sixty. Another answer it could be is one hundred and twenty or any multiple of sixty and above. The rule is that the number can only end in a zero because four and six do not have any multiple that ends in a five.

Jerlin from Saltash.net Community School in the UK, Majid, Aishwarya and Christian used listing strategies to find common multiples. Jerlin said:
The smallest number is 60. I first used the number sieve and then tried to work it out without the number sieve. This is what I did -

I wrote down the multiples of 4, 5 and 6. Then I highlighted the common multiples. From the highlighted numbers, I found that the Lowest Common Multiple (LCM) was 60.

They are both thinking of 29.

Ayla from Woodlea Primary School in the UK also sent in 29, Heleen, Luna and Shriya sent in a list of possible numbers, shown below. How are Shriya's numbers related to Majid's answer of 29?
Yes, you could have been thinking of the same number because 4Ã—7=28. If you had been thinking of the same number, your number could have been 29, 57, 85, 113, or 141.

On this problem there are multiple numbers in common because 5 is a [factor] of 10.

They could still be thinking of the same number. 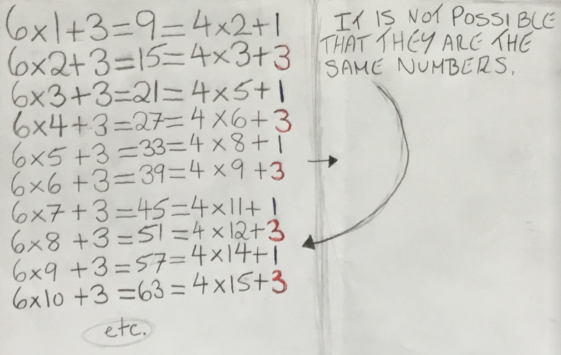 
Can you find a number with the property that when it is divided by each of the numbers 2 to 10, the remainder is always one less than the number it is has been divided by?
Aishwarya found one by searching the multiples of 9:
Firstly, for this number to produce a remainder of 9 when divided by 10, the end digit must be 9. Having figured this out, I decided to look at the multiples of 9, in particular ones in the sequence 81,171, 261, 351 ”¦ . (multiples of 9 ending in 1, so that when 8 is added, the last digit will be 9)

Shriya generated a long list of conditions and a careful logical argument to make the searching quicker. Click here to see Shriya's work.