Can you find a strategy that ensures you get to take the last biscuit in this game?

Can You Traverse It?

How can you decide if a graph is traversable?

Well done to Duncan from Wilson's School in England who sent in this solution.

Consider an existing connected planar network. Adding another [region] onto existing vertices would involve one less vertex added than edges created. The original shape is not disrupted. One more region is created.

An unconnected extension, consisting of a vertex at the end of an edge, will create no new regions.

Therefore, new regions that are connected to the old regions arise out of the difference between vertices and edges.

The relationship still holds true as these are connected planar shapes.

However, in a cube with an indent, the relationship does not hold as it is not connected. The indent is isolated and cannot be reached by an edge. It is like a separate network which shares the region of one face. 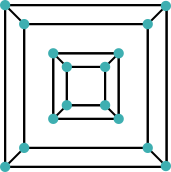