Too Close to Call

Weekly Problem 24 - 2012
Can you put these very close fractions into order?

The year 7 mentoring group from Bangkok Patana School in Thailand, Ruby from Loughborough High School and Jayden and Kiefer from Leys Junior School, both in England, worked out which of the fractions in the example are equivalent to terminating decimals. This is Jayden and Kiefer's work:

First, we predicted which fractions would have a terminating decimals, this was quite easy as we could use process of elimination. $\frac 23$ - this is really easy as it is commonly known that this is equivalent to $0.6\dot6$ reoccurring.

Then, you can eliminate $\frac7{12}$ as there is no possible way to convert it into [a fraction with denominator] that ends with zero (10,100 etc.) apart from numbers in the 120 times table.

The year 7 mentoring group put the fractions in a table, and focused on the denominators: 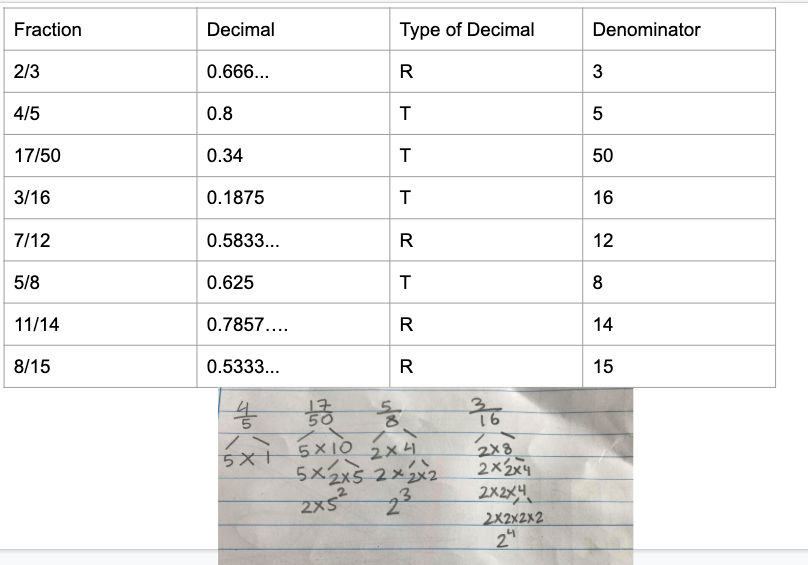 We took all the terminating fractions and factorized the denominator. We got the numbers: $5,2$ or both.

This made us think that to get a terminating decimal, the factors of the denominator should be $2,5$ or both.

W.H., Dashiell from Sequoyah in the USA and Carlos from Kings College Alicante in Spain all found this same rule using unit fractions (numerator = 1). This is some of W.H.'s work:

One possible reason that the terminating fractions have exclusively prime factors of $2$ and $5$ could be to do with methods like percentages. Because a percentage is defined as a fraction with a denominator of $100,$ we can see that $100$ is a power of $10,$ and $10 = 2^1\times5^1.$ This means the only numbers that divide $10$ and return a whole number are $2$ and $5,$ so it logically follows that only fractions that have denominators with these prime factors are terminating. As all fractions have a fraction $\frac1{10^n}$ that is smaller than them, we can treat all of these cases the same.

Dashiell found the same rule, but described it in a very different way:

Then I realized that this worked [only] if the fraction was simplified. Otherwise fractions like $\frac3{12}$ wouldn't fit into any of the categories, but the equivalent decimal would be finite or in this case $0.25.$

So if the denominator is a factor of a power of ten then the equivalent decimal is finite.

W.H. explained how the reasoning for fractions $\frac1n$ can be extended to simplified fractions with numerator $>1.$ Click to see this explanation.

Say that we have a fraction such as $\frac58,$ which can't be simplified as $5$ and $8$ are something called coprime, meaning their only common factor is one. However, all of these coprime fractions can be expressed as a multiple of another fraction; in this case $\frac58 = \frac18\times5.$ Because this can be shown in terms of one of the simpler fractions, we can still apply this method.
The reason that the method still works for these non $\frac1n$ fractions is that we know a terminating fraction in the form $\frac1n$ can't have any multiples that are recurring, meaning that if the first fraction is terminating, then all fractions that are multiples of the first one are also terminating.
However, this process does not flow exactly the same for recurring numbers, as fractions like $\frac6{12}$, which should apparently be recurring according to this logic, are actually terminating. However, we can use the previous simplifying method to show that the reasoning is still sound.

Joseph sent in this method for testing whether a fraction's decimal equivalent will terminate. Can you see how Joseph's method uses the same rule?

Tiger and Utkarsh, John from Royal Latin School, An and Kaishin all said that fractions whose denominator is a factor of a power of $10$ (when simplified) are equivalent to terminating decimals because of the way we write numbers. Kaishin wrote:

Edward 1 and his twin brother Edward 2 used this idea to prove the rule:

This fraction can be simplified by factoring out all the common multiples of $2$ and $5$ in the numerator. Therefore, $f=\dfrac{j'}{2^y+5^z}$ for some new integers $j', y, z.$ Clearly, this form shows that the denominator consists purely of $2$s and $5$s.

Thomas used these ideas to describe how the terminating decimal can be found:

This method can be used in every case where the denominator in simplest form of the fraction can be factored into purely $2$s and $5$s.