We had just a few submissions for this activity but they show a variety of solution systems.

Liva and Maya from the International School of Latvia sent in the following:

We solved the ladybird box problem. We both solved it without knowing the other one did too. Then we got together and talked about it.

Liva: So first I read the instructions. I tried some ways online, but it didn't work so I read the instructions again and it didn't say that the ladybirds can't be three diagonally, so I put all six randomly.
Then I put all the ladybirds that fit only the first instruction - two ladybirds in every column.
Then I tried to put them so they fit the second instruction.
After that I put only five - top right corner, top left corner, exact middle, bottom left and bottom right corner.
Then I saw that in the middle row was only one ladybird so I put the sixth ladybird next to the middle one and then I moved left bottom one space to right, because I knew about now they fit in every row and column.
Then I counted... Six! And it fits the instructions!!!

Maya: So first I read the instructions. It said that I have to put them in with only two in each column and row but it never said diagonally, so I started on the first column and put two going down.
Then I went to the second column and put two on the bottom going up.
Then the last two spaces that would work were the top and bottom squares on the last column.
Then I looked at the last words. 'Can you find different ways of doing it?' Yes! Just put it upside down! So that's how I solved the ladybird problem!

Jimmy from the Crescent Head Public School in Australia sent in the following:

I used counters to figure it out. I made a few mistakes at the start but once I got the hang of it I didn't need the counters. 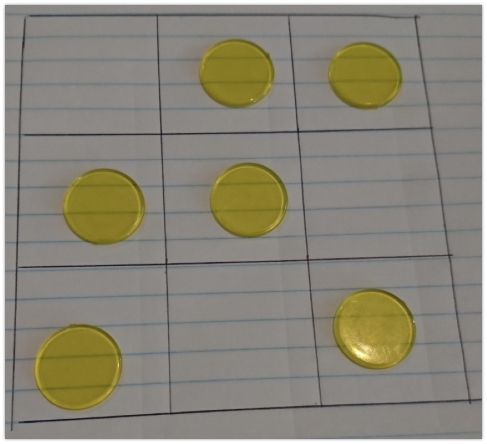 Thomas spoke to his Granny who wrote down what he said:

"I put two in the first row then two in the second row. I saw one column with one ladybird and a row with one so I moved the last ladybird until there were two." 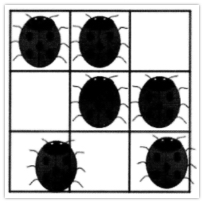 David from Histon Junior School said at first he couldn't do this problem. But when he'd found one way to place the ladybirds, he kept finding more and more!
Well done!

Thank you for these. I hope you'll send in solutions to other activities soon.
The NRICH Project aims to enrich the mathematical experiences of all learners. To support this aim, members of the NRICH team work in a wide range of capacities, including providing professional development for teachers wishing to embed rich mathematical tasks into everyday classroom practice.