One Is a Snail, Ten Is a Crab

One Is a Snail, Ten Is a Crab: A Counting by Feet Book by April Pulley Sayre, Jeffrey Sayre and Randy Cecil 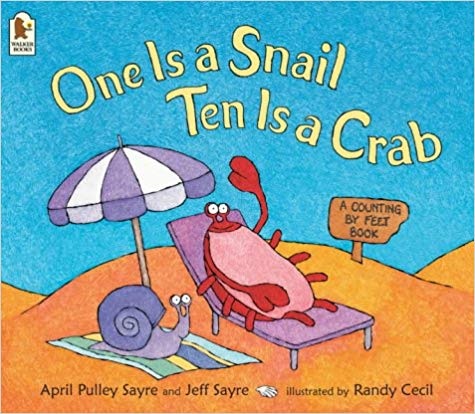 A snail has one foot, a person has two, a dog has three, insects have six, spiders have eight and crabs have ten (if you count their claws).

This book shows delightfully ludicrous illustrations of numbers made up of other numbers, such as 7 as an insect and a snail. Younger children can enjoy exploring and recording ways to make a number, such finding different ways of making 9 (e.g. a spider and a snail or two dogs and a snail), or making 20 just using dogs, people and snails. There are also interesting patterns to spot, such as the way you can make odd numbers by adding a snail to the previous creature, or make 40 with four crabs or ten dogs, illustrating commutativity.