Well done to everybody who investigated the number of rectangles inside a counting stick. We received a lot of solutions to this activity and unfortunately we don't have space for all of them here. Thank you to all the children at Highgate Junior School in the UK who sent in their ideas, and thank you as well to Ryan from Kong Hwa School in Singapore, Lawrence from YCIS in China, and Amy and Teija from Pierrepont Gamston Primary School in England. You all had some great suggestions similar to the ones we've featured below.

Melissa from Coalway Junior in the UK approached this task systematically. She said:

Well done, Melissa! How did you work out that this makes 55 rectangles altogether? Is there a quick way of adding up all those numbers?

Marie and Sophia from Phorms München in Germany used a very similar method, and sent in this picture to demonstrate: 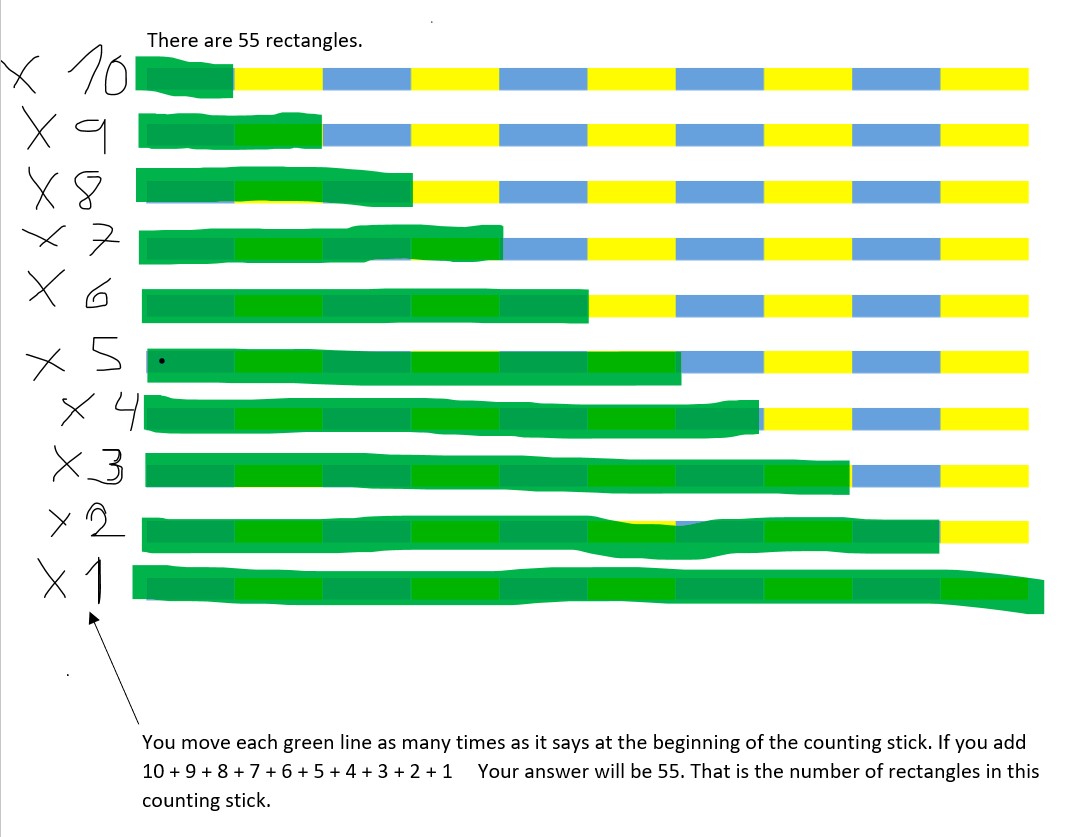 Thank you both for sending in that very clear picture.

Luca from Highgate Junior School in the UK thought about this in a different way. Have a look at Luca's explanation and see if you can follow his method: 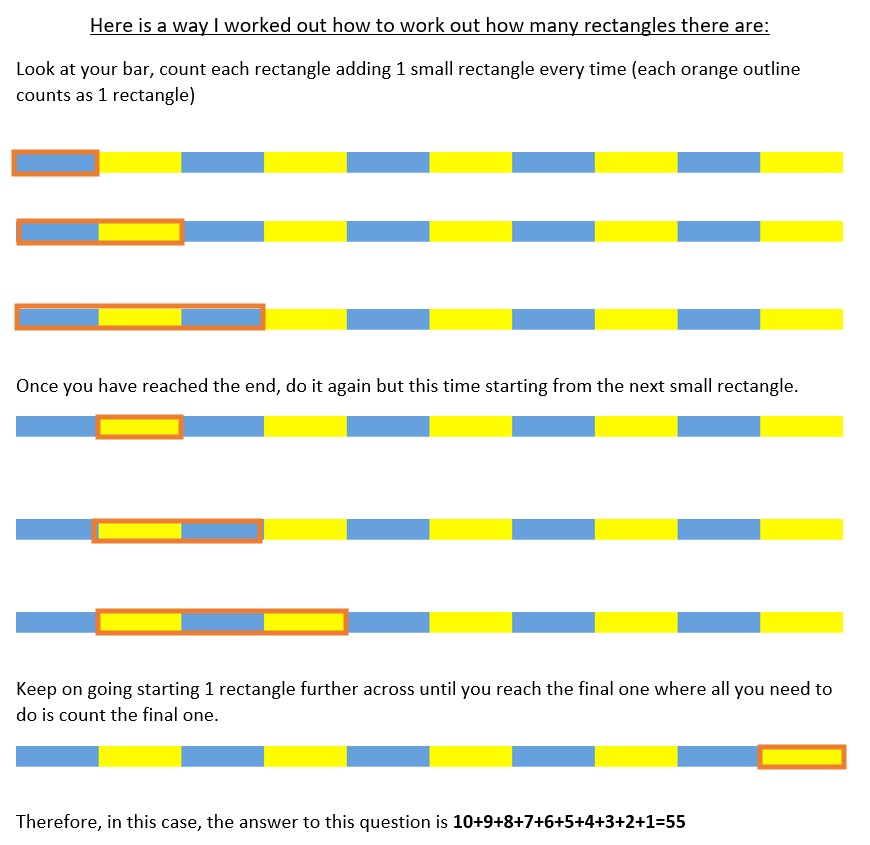 Sophia from Highgate had a think about the general pattern. She said:

Lots of other children also noticed that there is a pattern when we look at the rectangles inside counting sticks of different lengths. Angel from Highgate said:

When investigating the sequence I noticed that the difference between the terms went up by one each time starting with +2 then plus 3 then plus 4 etc.

Well done, Angel - this is a different way of thinking about Sophia's pattern.

We received lots of solutions pointing out that starting at 1 and following the pattern +2 +3 +4 gives us the triangle numbers, so well done to everybody who spotted this. Dhruv from St. Anne's RC Primary School sent in this table of results: 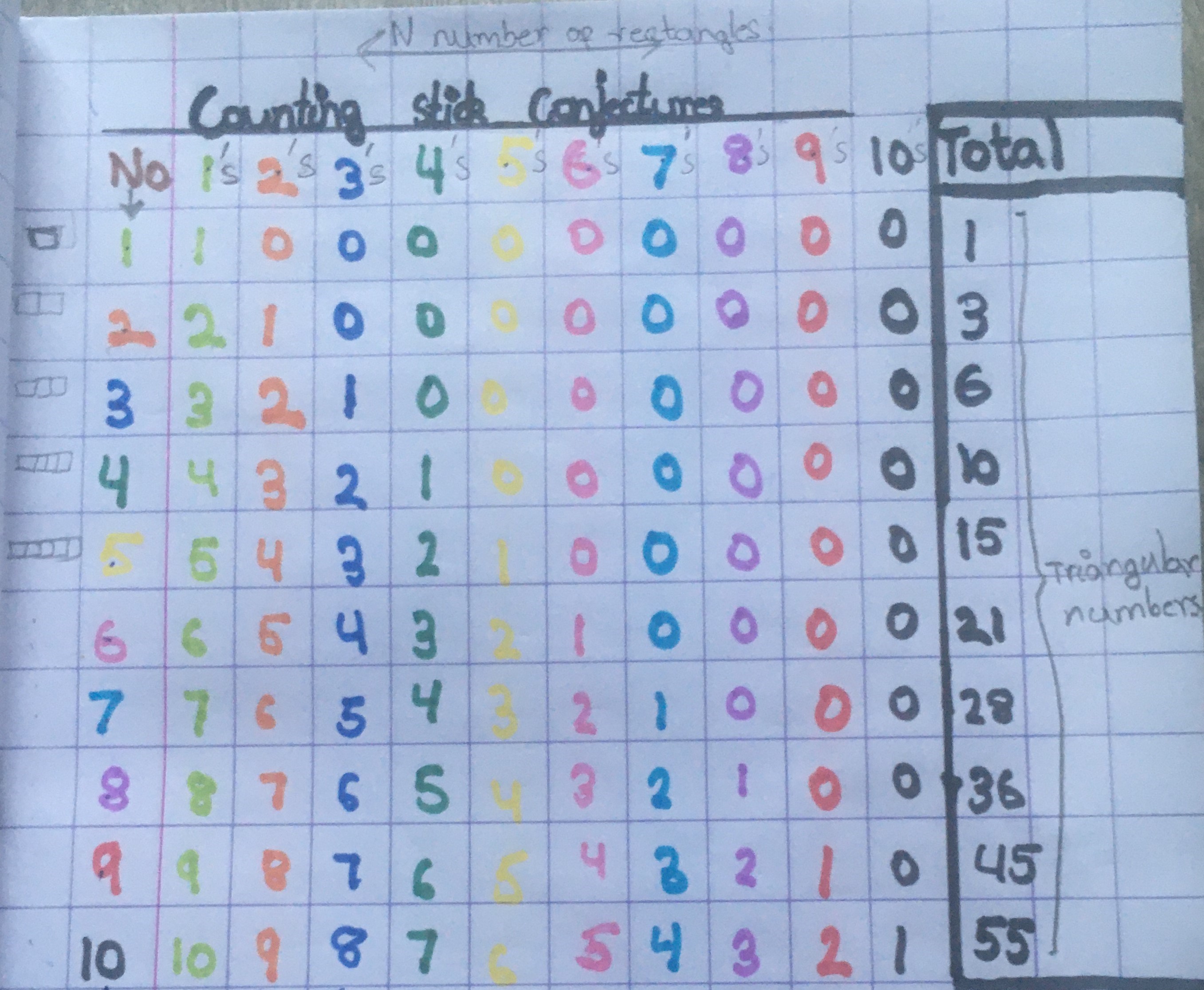 Some children thought about quicker ways of adding the numbers of rectangles inside a counting square. Anya from Highgate noticed that the numbers in the sum 10 + 9 + 8 + 7 + 6 + 5 + 4 + 3 + 2 + 1 can be put into pairs that make 11. Have a look at Anya's full solution. I wonder what each pair of numbers might add up to if we change the length of the counting stick?

Oscar from Highgate used the fact that the pairs of numbers make 11 to find a quick way of adding up the numbers. He explained:

An easy way to figure out the sum of a sequence of consecutive numbers is to add the first and last numbers and multiply the result by the number of pairs of numbers. Here this would be 1 plus 10 = 11 x 5 (pairs) = 55

Well done, Oscar. How do you know that we can just add the first and last numbers and multiply the result by the number of pairs?

Aran from Highgate explained why this method works. He said:

There is a formula that can be used to quickly find the number of rectangles in large sticks.

Starting with the stick with 6 blocks, I noticed that you could add the numbers in a different order

This also works for all the other numbers!

Aran went on to describe a way that we can use algebra to write this method:

The formula is: If x = the number of small rectangles on the stick then x divided by 2 multiplied by (x+1) equals the number of possible rectangles. This formula works with both odd and even numbers.

Dhruv drew a picture to show how to add the numbers in pairs when finding the number of rectangles inside the 100-length counting stick:

Thank you for sending this in, Dhruv, it makes it very clear that we are adding 101 together lots of times. It's slightly trickier to check that we should be adding it together 50 times. I wonder if anybody can explain why it needs to be added 50 times?

TaoHai thought about this formula in a different way. They sent in this explanation:

Well done for using algebra to prove that the formula always works! TaoHai has taken a counting stick of a general length of rectangles, n, and has called the sum of all of the rectangles inside it S. By reversing the list of numbers and adding the two lists together, we can show that two lots of S must be the same as adding n lots of n+1 together. This proves that the sum S is half of n multiplied by n+1.

Ci Hui Minh Ngoc from Kong Hwa School in Singapore explored what would happen if the 'counting stick' was a square rather than a long rectangle. Try this for yourself first - if you draw a square on a piece of squared paper, how many squares can you see inside your square altogether? Can you see a pattern in the answers if you begin with squares of different sizes? Have a look at Ci Hui Minh Ngoc's full solution to see what they found out.