Using the picture of the fraction wall, can you find equivalent fractions?

Thank you to Colneis Junior School in Felixstowe who sent in several solutions.

I could see in the ending image that the first section (coloured orange) and the end section were in line with the first sixth and the last sixth.

Q1) What do you notice?
• Every time it shrinks more sections appear.
• The fraction grid starts with 21 sections and travels down to 12 sections.
• If you looked at it from a bird's eye view before it shrinks it would look identical to the end.

Q6) Explain why. Because they are equivalent.

Q7) Focus on the starting image, how will you add to the pattern?
I tried putting sevenths on the wall and I noticed that it wouldn't submerge to any others because it is not equivalent to any others so when it gets to the end it will be its own line.

My solution for the tumbling down is:
On the wall, you need equal fractions to fall into other equal fractions, but when I added the sevenths it wouldn't fall into any others because it's not equivalent to any other fraction.
If you wanted to add another unequivalent fraction you would have to go up to elevenths because $\frac{1}{9}$ falls into $\frac{1}{3}$ and $\frac{1}{10}$ falls into $\frac{1}{5}$. And also 7 and 11 are prime numbers.

Her complete work can be viewed here: Molly.pdf

We noticed when we watched the video that the fraction wall begins with seven horizontal lines and ends with two. It begins with 17 vertical lines and ends with 13. The reason for this is because some vertical lines merge into each other. The wall shows a line of symmetry.
We know that there is a line of symmetry at the start and end. At the end, there is one bar of 12 unequal sections. At the start of the video, the fraction wall starts with 15 vertical lines on the inside and two on the outside. At the end, there are 11 vertical lines and two on the outside. We know that lines $\frac{2}{6}$ and $\frac{1}{3}$ merge together to make one line. $\frac{4}{6}$ and $\frac{2}{3}$ merge and lines $\frac{3}{6}$, $\frac{2}{4}$, $\frac{1}{2}$ merge together. We noticed that the lines that merge are equivalent fractions. So that the lines merge, the fraction lines that are at the top fall quicker than the lines towards the bottom.
By adding another bar to the top, your result wouldn't be the same as some fractions (for example sevenths) wouldn't merge as they aren't equivalent to anything.

Here is part of what Vivian wrote:

At the ending point, you can see that all of the lines have joined together. To get the value of the ending parts... I subtracted the fractions from each other.

Maisie and Ellie-Rose sent in the following:

We noticed that all the lines go down at the same time and it starts with 12 sections and ends with 12. Also, we found out that some lines are vertical and others are horizontal which makes them overlap and then disappear. We know that the bottom starts with 2, and ends with 12. When the video finishes the shapes are all different. There are 17 vertical lines at the start as there are 15 on the inside and two on the outside. At the end, there are 11 vertical lines within the inside and there are two against the outside.
The fractions of $\frac{2}{6}$ and $\frac{1}{3}$ merge together to make one full line. Then $\frac{4}{6}$ and $\frac{2}{3}$ merge together as well and $\frac{3}{6}$, $\frac{2}{4}$ and $\frac{1}{2}$ this is because they are all equivalent. By adding another bar to the top, your results would not be the same as some fractions, for example, the fraction of sevenths wouldn't merge as they are not equivalent to anything. 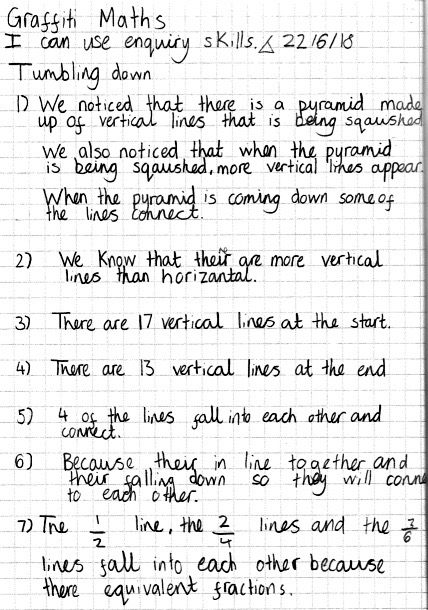 There were some excellent pieces of work here particularly showing good explanations of thoughts and ideas. Well done.
The NRICH Project aims to enrich the mathematical experiences of all learners. To support this aim, members of the NRICH team work in a wide range of capacities, including providing professional development for teachers wishing to embed rich mathematical tasks into everyday classroom practice.