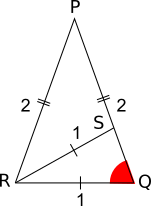 It is helpful to find what these two triangles have in common. Angle PQR (or SQR), shown in red on the right, is an angle in both triangles. 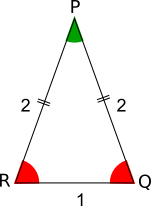 Triangle PQR is isosceles, so angle PRQ is equal to angle PQR. It is also shown in red in the diagram on the left.

The green angle at P is the angle that needs to be added to two red angles to make 180$^\circ$.

Triangle QRS is also isosceles, and its line of symmetry is through R. So angle RSQ is equal to angle SQR. It is also shown in red in the diagram on the right.

The angle at R also makes a sum of 180$^\circ$ when added to the two red angles. So it is equal to the green angle at P.

But this means that the triangles PQR and QRS are similar. 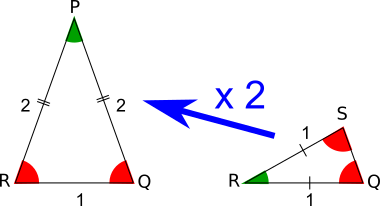 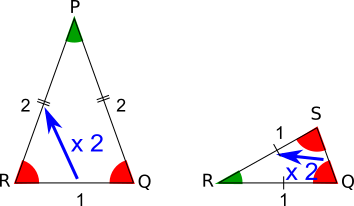 Either of these facts about similar triangles tell us that QS = $\frac12$.
You can find more short problems, arranged by curriculum topic, in our short problems collection.
The NRICH Project aims to enrich the mathematical experiences of all learners. To support this aim, members of the NRICH team work in a wide range of capacities, including providing professional development for teachers wishing to embed rich mathematical tasks into everyday classroom practice.