You may like to read the article on Morse code before attempting this question. Morse's letter analysis was done over 150 years ago, so might there be a better allocation of symbols today?

This short article gives an outline of the origins of Morse code and its inventor and how the frequency of letters is reflected in the code they were given.

Working numerically
To find the average, the 4 numbers were added together and then divided by 4. That gave 48.


Average as balancing
The average of the 4 numbers can be thought of as the point balanced between them, so that the distances above and below the average are balanced. This is shown in the diagram below - the sum of the red and blue lengths is equal to the sum of the yellow and green lengths.

So when the numbers are all reduced by 8, all of the points and the distances between them move 8 units down, as shown in the diagram. So the average will also go down by 8. 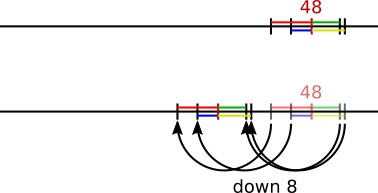 
Average as sharing
Imagine that 4 people each have some money, and the average amount of money is £48. That means that if the 4 people pooled their money and then shared it out equally, they would each get £48.

If they all spend £8, that would decrease each of their shares by £8. So each person's share would be £40.


Working algebraically
The four numbers can be written as $a,b,c$ and $d.$