We have an open-topped multicoloured box on the left with four coloured cubes waiting to go in (labelled A in the picture below).
On the right (labelled B) we have the same model but the box has been painted. 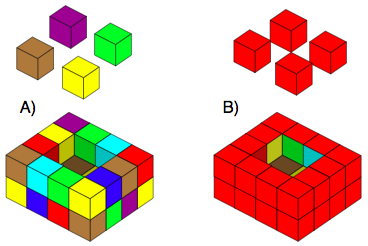 The box always has walls and base that are just 1 cube thick.
Covering one face of a little cube uses 1 unit of paint.


How many units of paint have been used to turn the muliticoloured box (A) into the painted box (B)?

How many units of paint have been used to cover the four cubes that fit in the box?

Here is another example which would need twelve little cubes to fill the open box (labelled as C): 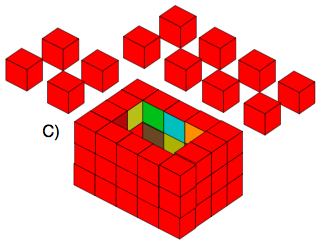 Do either of these two boxes use the same amount of paint as the cubes that would fill them?

Find the size of an open box that needs the same amount of paint to cover the cubes that fill it as its outside.

This activity was designed for the 2016 National Young Mathematicians' Award (NYMA) so it might be a particularly useful activity for a small group of your highest-attaining pupils to work on. (For more information about the NYMA, see this brief article which is part of this feature.) This task is a useful vehicle for developing systematic approaches. It can be used as an activity to encourage children to explain in written or spoken words what it is they have done.

Since this activity is aimed at the most confident mathematicians, there will not be much that you have to do to introduce it.  However, it would be worth making the first open box and encouraging the pupils to discuss their different ways of answering the first challenge.

Working as a team of four pupils with 32 cubes for them to use for the remaining challenges encourages a very thoughtful and systematic approach.

You may find this double-sided sheet of the challenge useful for printing and giving out to learners:  pdf or Word document

Tell me about how you are getting a solution for the challenge you are working on.
(When encouraging the pupils as they work on the task, try to avoid saying things about what you notice and directing them in your way of attempting a solution.)

Learners might like to try the other two challenges that were part of the National Young Mathematicians' Award 2016:  Dart Target and Open Squares.