This is a game for two players.

You need a piece of paper (which the two players share) and a pencil or pen each. You could each use a different colour if you like.

Watch the video below to find out how to play.

One player draws a daisy with five petals, a little like this (it does not have to be very neat!): 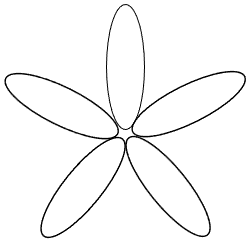 Players take it in turns to shade one petal or two petals next to each other.

The winner is the one to shade the last petal or petals.

Have a go at playing the game several times against a friend. (You could print off this sheet of daisies to shade in or just draw your own.)

Have you found some good ways of winning the game?

Does it matter whether you go first or second? Why or why not?

This game, a variant of Nim, is an engaging context in which to encourage learners to think ahead and ultimately develop winning strategies.

Learners wil benefit from having played Nim-7 before trying this game of Daisy.

This problem featured in an NRICH Primary webinar in June 2021.

Introduce the game to the class by watching the video all through. Invite learners to ask questions or make comments, and use these to help clarify the rules. You may want to watch all or part of the video again if there are any uncertainties. Give pupils chance to play the game several times in pairs so that they get a really good 'feel' for it.

Bring everyone together and explain that the idea now will be to focus on ways of winning the game (playing strategically). In order to facilitate this, play the start of the video again, but this time pausing after Player 2's first turn (about 47 seconds in). Ask learners what Player 1's options are now. There are only two possibilities:

You could draw each of these separately on the board. Taking each possibility in turn, ask the class to think about what Player 2 will do next. Draw out the fact that, in terms of this game, the two possibilities are in fact the same as whichever petal Player 1 shades, Player 2 will shade the single remaining petal and so Player 2 will win. At this point, you could watch the rest of the video just to remind children of the way in which the game ended.

At this point, play the video from the beginning again, this time pausing after Player 2's first turn as you did before. We now know that shading those two petals next to each other was a very good move for Player 2 (we might say that Player 2 was playing 'strategically'), as it meant that she was certain to win the game, no matter what Player 1 did next.

Ask the group to think about whether Player 1 could have done something differently on her first turn to be certain that she would win, right from the start, instead of Player 2 'gaining control'. Give learners time to work on this in pairs and as they do so, wander round the room, looking out for good ways of approaching the task. In a mini plenary you could share some of these. You may want to instigate a discussion about whether it makes any difference if Player 1 chooses a different single petal on their first turn. It will not necessarily be obvious to many children that the position of that first single petal does not matter. Have any pairs thought about what might happen if Player 1 shades two petals next to each other on her first turn?

It might be helpful to bring everyone's ideas together on the board, drawing some possible games. The key here is to develop a winning strategy so, no matter what moves your opponent makes, you will always win. This is a tricky concept for many young children, as they forget that they cannot control the other Player's decisions!

Can the class reach any conclusions about whether it is better to go first or second if you want to win this game of Daisy?

Playing a pair against another pair will allow children to talk to each other about their ideas and increase their confidence.

Learners could investigate what happens when a daisy with six petals is used.