Can you find a strategy that ensures you get to take the last biscuit in this game?

In this twist on the well-known Countdown numbers game, use your knowledge of Powers and Roots to make a target.

Can You Traverse It?

Neel from Zurich International School in Switzerland and Miraya from Heckmondwike Grammar School in the UK found out which of the graphs are traversable. Miraya wrote:

Nayanika from The Tiffin Girls' School in the UK thought about the start and end points of the traversable graphs: 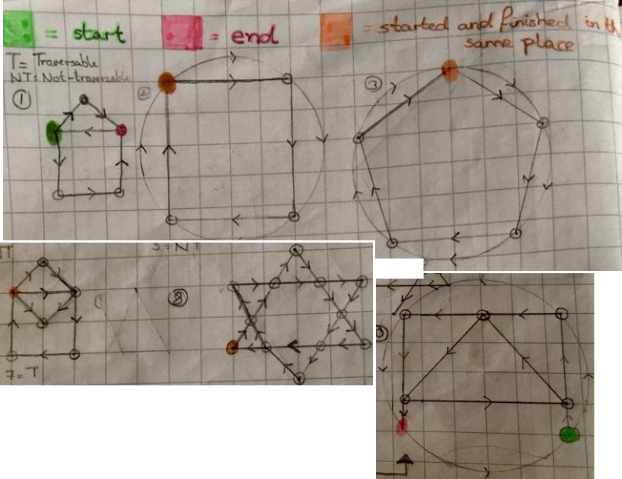 For the traversable networks where I started and finished in the same place, I noticed that the shapes were generally the ones where simple shapes were put in circles because the method was to simply cover the inside shape then just go around the circle.

The condition that I have come up with that guarantees whether a network is traversable or not is that if there is a centre vertex that you must cross multiple times in order to cover all the edges then it is very likely that the shape is not traversable.

Nayanika had a suggestion for choosing the starting point:

The nodes with the highest number(s) of routes to directly linked points are the potential beginning points.

Sajid from Wilson's School, James from Hamstel School, Hannah form Tring Park School for the Performing Arts and Roger from Westfield Academy, all in the UK, counted the number of routes connected to each point. This is James' diagram: 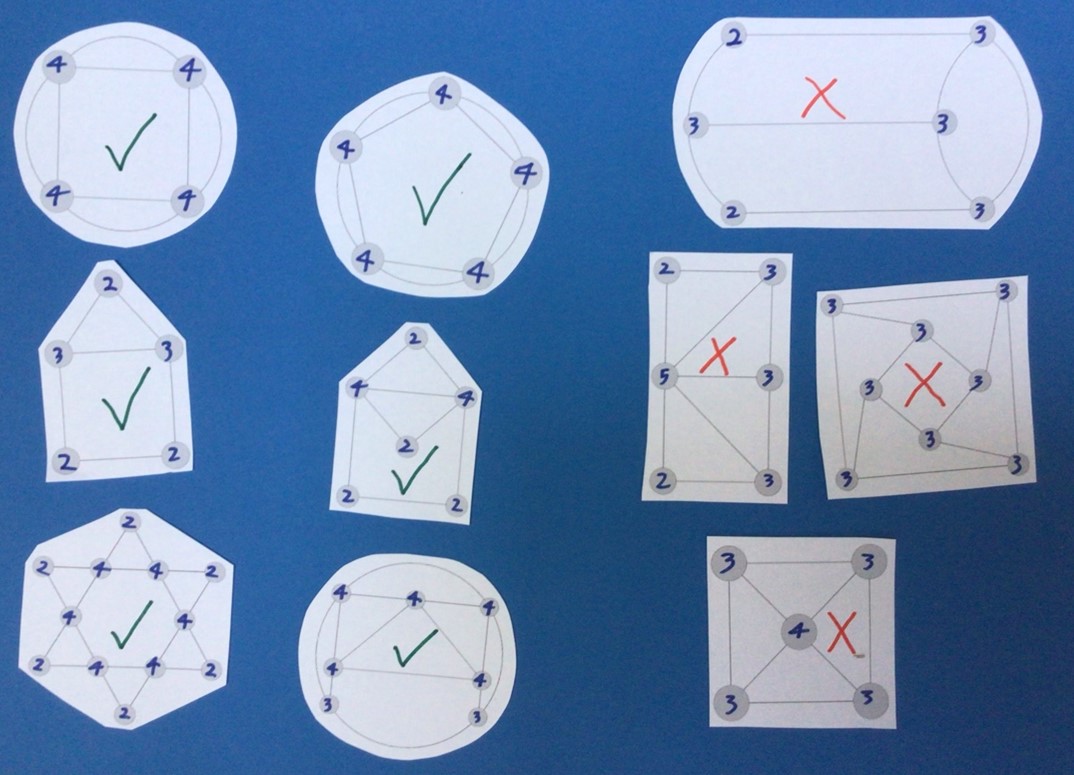 Hannah recorded these results in a table: 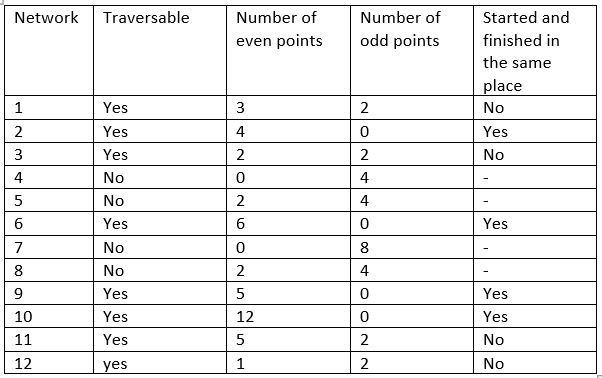 Adith from Mount Waverley Secondary College in Australia, Ilham from City of London School for Boys in the UK, M.Z. from Kings College Alicante in Spain, Lauren from TTS, Olivia from St Helen and St Katharine in England, Hannah, Sajid, James and Roger used these ideas to find a way of telling whether a network is traversable. Sajid wrote:

After a few thought-provoking minutes and a couple of false theories, I counted the number of edges connecting to each node. Finally, after all that work, I realised that the graphs that were traversable had a number of 0 or 2 odd nodes. Therefore, this meant that the untraversable graphs had a number other than 0 or 2 of odd nodes.

To explain why, James wrote:

I realised that there must be a route both into a point and out of it to make it traversable, this meant that if a graph had all even routes out of points then it would always be traversable. Also, if the routes are all even, then the route around the graph can start and finish at the same point, making it a complete circuit. (This means the starting/finishing point also has the same number of routes into it as out of it)

If the network has only even vertices then it doesn't matter where you start.
(Even vertices = vertices with an even number of lines coming out of it)

If you have exactly two vertices with an odd number of edges pointing towards it, then you will have to begin at one of the vertices and end at the other vertex.

This is because if a vertex is odd, then it will have one line passing it on coming or on leaving, and one (or more) pair(s) of lines passing by it (on coming and on leaving). 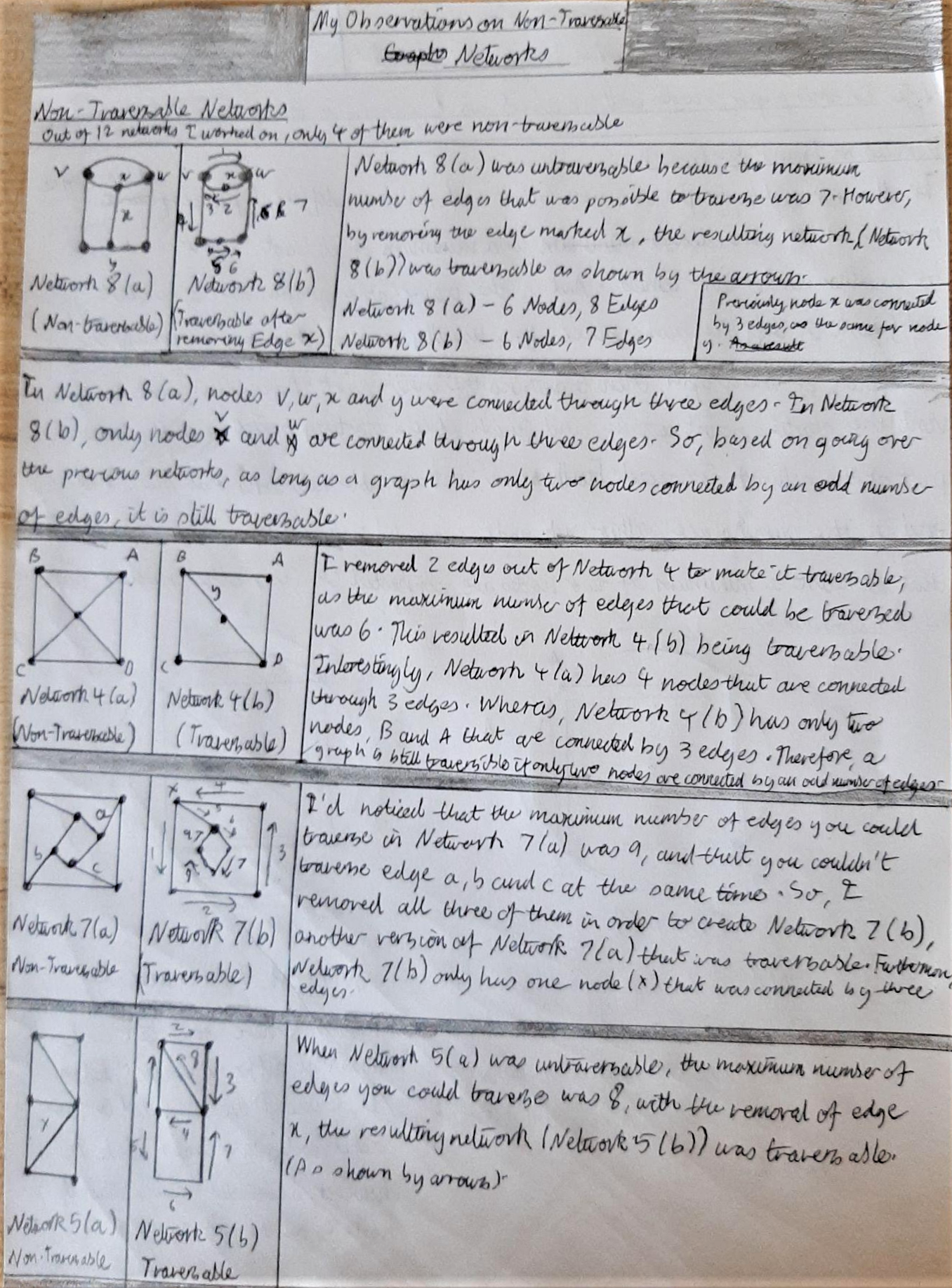