Here is a set of ten cards, each showing one of the digits from 0 to 9:

The ten cards are divided up between five envelopes so that there are two cards in each envelope.

The sum of the two numbers inside it is written on each envelope: 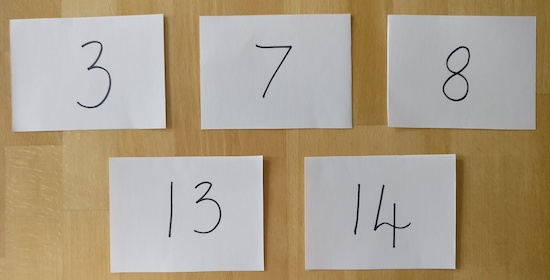 What numbers could be inside the "8" envelope?

Thank you to Alan Parr who inspired this task.

Sealed Solution offers the chance for children to work in a systematic way and is a great context in which to encourage them to explain and justify their reasoning.

Begin by familiarising children with the context: Using digit cards 0 to 5, invite the class to watch as you put 0 and 1 in one envelope and write their total on the outside (or on a 'post-it' note stuck to the envelope). Put 3 and 5 in another envelope, again writing their total on the envelope. Explain that the other two cards will go in the last envelope. What will the total be? How do they know?

Try this again, this time putting 0 and 5 in one envelope and recording the total. But then put two cards in another envelope without showing them to the children. Write the total on the outside of the envelope. Repeat this for the third envelope. (For example you could have 1 and 3 in the first and 2 and 4 in the second.) What numbers are in the two envelopes? How do they know?

Try again, this time keeping 0 and 5 in the first envelope but suggest that you want to put the other cards in pairs into the envelopes, so that the totals on the other two are the same. What could you do? How do they know? At each stage, children can be working in pairs, perhaps using mini-whiteboards and digit cards to try out their ideas.

As a final 'warm-up' challenge with cards 0 to 5, show three envelopes with the totals 4, 5 and 6 written on them. Invite learners to find out which pair of cards could be inside each envelope. In this case, there are two possible solutions, which will prepare them well for the challenge as written in the problem.
Use the images in the problem to explain that we now have digit cards 0 to 9, and that they have been put in pairs into five envelopes with the totals of 3, 7, 8, 13 and 14. Allow time for learners to work in their pairs on the task, bringing everyone together for a mini plenary/plenaries as appropriate, to share approaches and ideas so far.
In the final plenary, focus on ways in which different pairs have worked systematically. You may decide to invite one pair to explain how they worked systematically but without giving any solutions and instead use that way as a whole group to find all the solutions. It is important to remember that there are lots of ways to work systematically and different pairs will have different approaches, which may be quite different from the way you would have chosen!

Having digit cards available for children to use will free up their thinking and will make it easier to try out different ideas without worrying about crossing ideas out on paper.

Children could make up their own problem along these lines.

Alan Parr, the creator of this task, wrote to tell us:
'I've recently returned to this for the first time in ages, working with some Year 6s [10 and 11 year olds]. They found it so accessible and involving that we took it to places I'd never previously dreamt of.' You can read what they did in the first April 2015 post on Alan's blog, and he writes about the task again in two March 2017 posts.