How many different ways can I lay 10 paving slabs, each 2 foot by 1 foot, to make a path 2 foot wide and 10 foot long from my back door into my garden, without cutting any of the paving slabs?

Thank you to everybody who submitted solutions for this problem. Here's how some of you thought about the problem:

Tor, from Harbinger School, UK,  and Edi, Joseph, Vladimir and Alastair, from The British International School of Shanghai Puxi, China, had a similar approach to the first part of the problem:

I first found the total number of squares in each pattern, and then computed the differences between them. So, the totals are: 8, 16, 24, 32, ... Therefore, the difference between any 2 neighbours is 8, so the $n^\text{th}$ pattern has $8n$ squares.

Abby and Rebecca, from the British International School, Shanghai, Puxi campus, and Rosie Coward, from Wycombe High School, England, worked out the formula for the second pattern:

Taking the next sequence, we realised that these were the same shapes, but filled in, rather than hollow. We counted each number of squares from the first patterns, and worked out the differences between each neighbour. Then we did that again, with the new sequence:

Tim, from Gosforth Academy, UK, used a geometric approach to the problem: 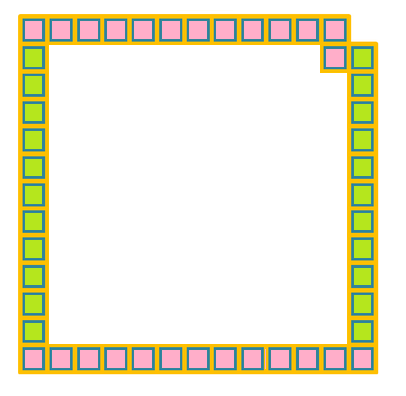 Interestingly, if we fit the pieces into each other, we get the solid shapes shown in the second sequence:

In the last figure, the $4^\text{th}$ triangular number appears $8$ times. Notice that the gap in the middle corresponds to the missing dot in the top right figure of the original pattern.

Michael and Lera, from Harbinger Primary, UK, expressed it in a slightly different way.

In the second sequence, each pattern is obtained from the previous one in the sequence, plus a contour from the first sequence:

Nia from School No. 97, Bucharest, Romania, created the next two patterns in each of the first two sequences, and gave a slightly different gometric interpretation:

The next two patterns (the fifth and sixth) in the first and second sequences are: 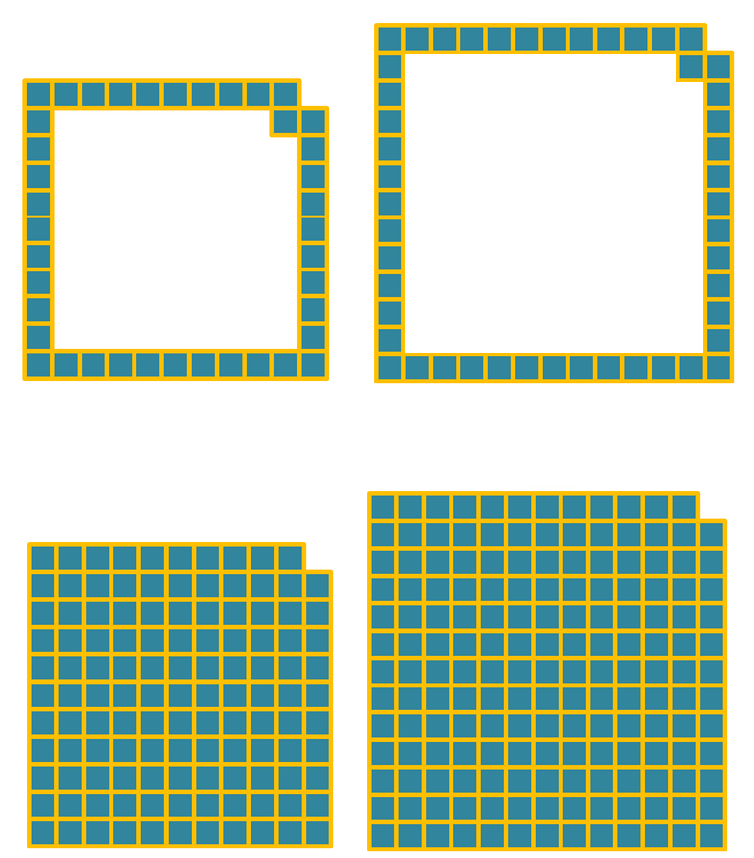 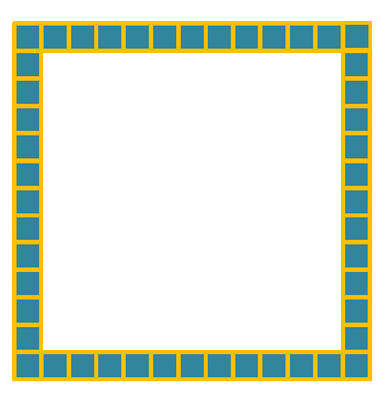 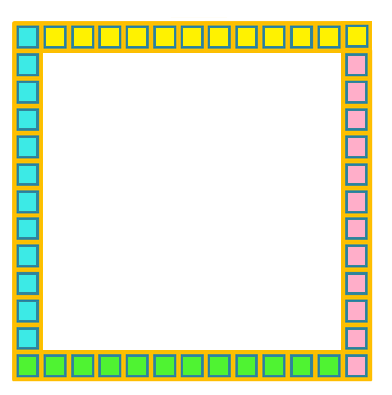 Now the number of squares are easy to count: there are four groups of $2n$ squares, so there are $8n$ squares.

Also, the difference between the two sequences is $4n(n-1)$.


Angela, Jessica, Brian,Frank, Abby and Rebecca, from The British International School, Shanghai, Puxi, China, have identified the number of squares in the next pair of patterns:
As we looked at the next two, we found that the same pattern occurred: the
first (linear) sequence was simply the outside 'layer' of the other (quadratic) sequence.

For the last sequence, we do repeated differences between consecutive terms again:

As we looked at them, we realized the reason why one was linear while the other one was quadratic. The first one was counting squares on the contour, which is simply finding the perimeter. The second one was finding the area of an almost full square, so it should have an $n^2$ term. In other words, the perimeter has only one dimension, while areas have two dimensions.

Nia from School No. 97, Bucharest, Romania, approached this part of the problem geometrically:

By moving the yellow squares from the picture below diagonally up, we can see that the first pattern is obtained from the contour of an $2+n$ by $2n+1$ rectangle. The diagram shows the $n=4$ case.

So the number of squares in the pattern is the same as in the contour of an $n+2$ by $2n+1$ rectangle, and hence, we can count the squares: 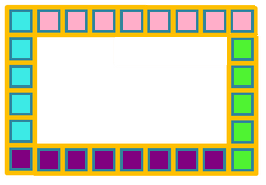 Yet another way of doing it was to compare this pattern with the one in the first sequence. We can construct one from another as shown in the figure below, again demonstrating the $n=4$ case:

If we erase the $n-1$ blue squares on each vertical side, and move the $n-1$ pink ones down diagonally, then we get the second pattern. So the numbers of squares in the second pattern is with $2\times(n-1)$ squares less than the first one. Since the first sequence had $8n$ squares in the $n^\text{th}$ pattern, then the formula for the third one is $8n - 2(n-1) = 6n+2$, as before. 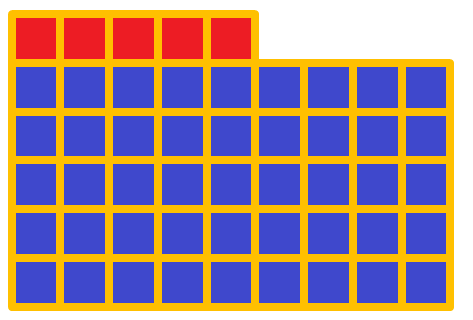 Emma, Inés and Eline from King´s College, Alicante, Spain, approached the last part of the problem slightly differently:
We divided the pattern into two rectangles: The area of the first one (in red) would be $(n+1)(n+2)$, while the area of the second one (in blue) would be $n(n+1)$. The diagram shows the case where $n=4$. 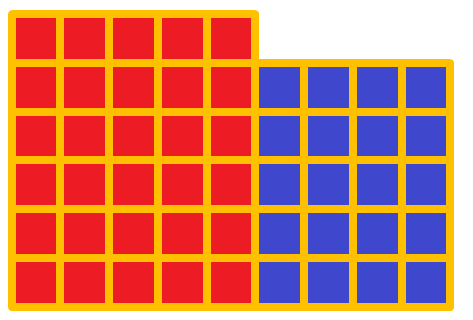 Emily Powell, from Hymers College, England, and Vladimir and Joseph, from The British International School, Shanghai Puxi Campus, completed the rectangle instead of breaking it up:
In the second sequence we know that the number of squares missing is always equal to n. So we can add an $n$ by $1$ rectangle to our pattern (in red below) so that we get a complete $(n+2)$ by $2n+1$ rectangle. The diagram shows the case where $n=4$. 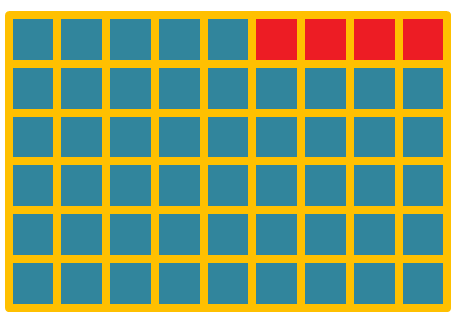 Sameer and Will, from Hymers College, England, noticed something different:

We know that the contour has $6n + 2$ squares. Then we can break the inside into two halves, as below: 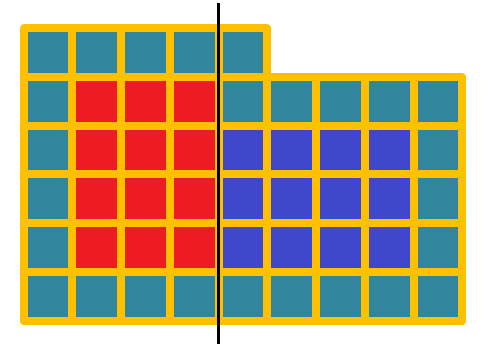 Well done to you all for sending such a variety of solutions!