Quadratic graphs are very familiar, but what patterns can you explore with cubics?

Can you produce convincing arguments that a selection of statements about numbers are true?

Caroline and James pick sets of five numbers. Charlie chooses three of them that add together to make a multiple of three. Can they stop him?

Kaartigan form Wilson's School in the UK, Deeya from St Mary's Catholic High School Astley the UK and Mahdi from Mahatma Gandhi International School in India went through the statements, and Sammy from Lancing College in the UK went through the graphs, matching them to statements. The images shown are from Sammy's work.

I saw that there were a few statements that applied to more than one graph. So I picked statements that seemed very specific that specified only one graph. Progressively, a lot of the graphs would get ruled out and I moved forward with this technique. 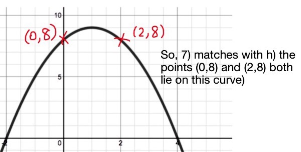 This has to be graph 7. This is because we can eliminate all the graphs which don't have a y-intercept of 8, as the point (0,8) has to be part of the curve. This leaves only graphs 5 and 7. As the gradient of [curve] 5 is decreasing, it cannot go through (2,8). Therefore this statement matches with graph 7.

Deeya began with statement (d) and then continued:

Graph 8 matches to statement (d) because for all y values to be greater than 0, no coordinates should be below the line y=0 as this line separates the positive y coordinates from the negative y coordinates. The only graph drawn this way is graph 8.

To match up the statements (b), (g) and (i), I wrote down the coordinates of the roots of the remaining graphs and added them together.

Graph 6 must match statement (b) as it is the only graph with a decimal root.

Graph 4 matches statement (i) because -2+3=1 which is the only odd sum among the other root sums.

The constant term is referring to the y-intercept, so the curve must have a y-intercept of -8.

Mohamed from the London Academy of Excellence Tottenham and Mahdi found the roots, intercept and the line of symmetry of each graph and used this to match the graphs to the statements. This is Mohamed's work: 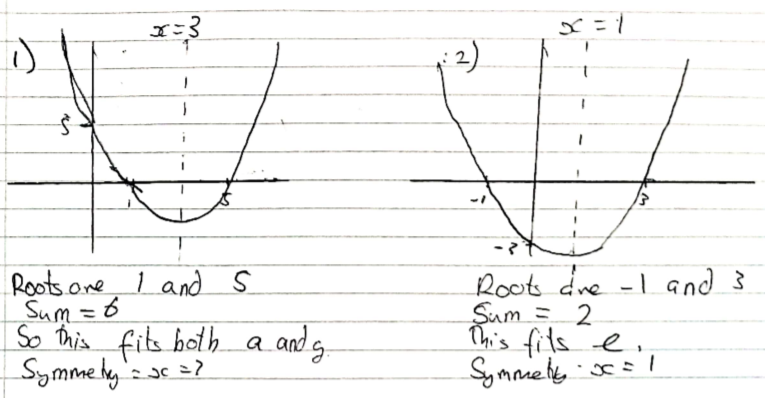 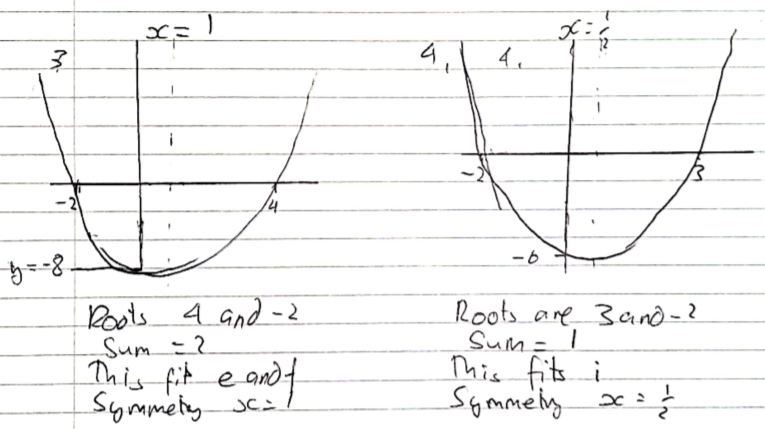 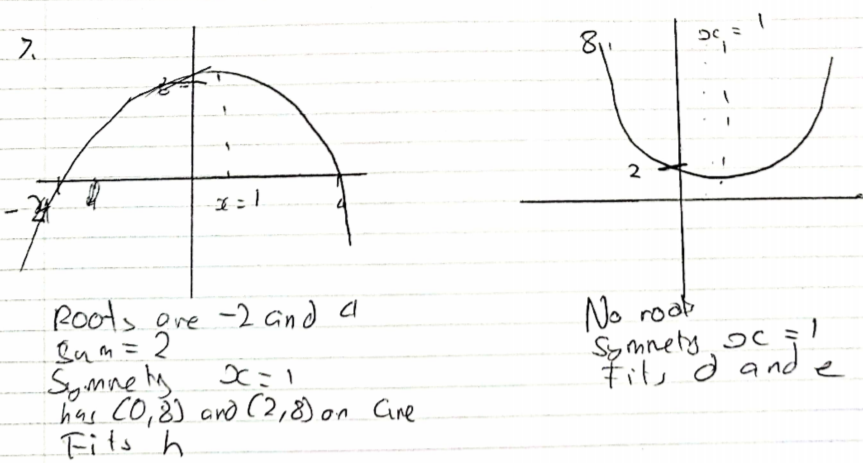 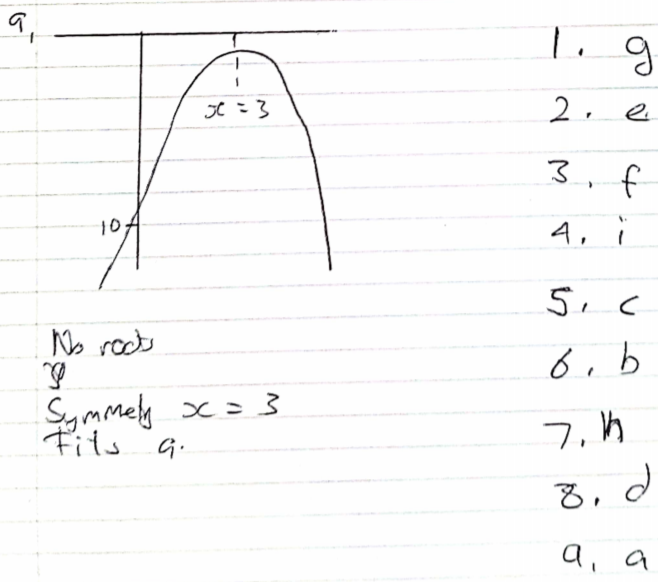 Zain and Joel from Hymers College in the UK used the same method. Zain wrote:

For (a), I realised that the turning point must have an x value which equals to 3. The two graphs which had this were 1 and 9.

(c) states that its graph has a line of symmetry which is x=k, where k<0. This shows that the vertex must be on the left side on the y-axis, and the only graph which has this is 5.

(d) says that all y values must be above 0 and the only graph with this is 8.

(g) states it has a graph which the sum of its roots is 6. The only one which makes this statement true is 1 (which has roots 1 and 5).

Lastly, we have (i) which says the sum of its roots is an odd number. As there are only two roots in a quadratic graph, we must find the graph with an even and odd root. This will make a sum of an odd number and the only graph that fits this requirement is 4.

After going through all statements, we must go back to the ones we haven't solved. These would be (a), (e) and (f).

We will have to go on to (f), which matched with 7 and 3. Again we can rule out 7, as it has already been used, which leaves us with 3 as the answer.

Eric from Lakeridge in the USA suggested finding equations for all of the graphs:

I mean, all of these can be bashed out if we find 3 points on the parabola. At that point we can just substitute for x and y, and from that we have a 3 variable system of equations for a, b, and c.

That sounds complicated, but Isabella from England did find the equation of each graph. Here is Isabella's work for graph 1: 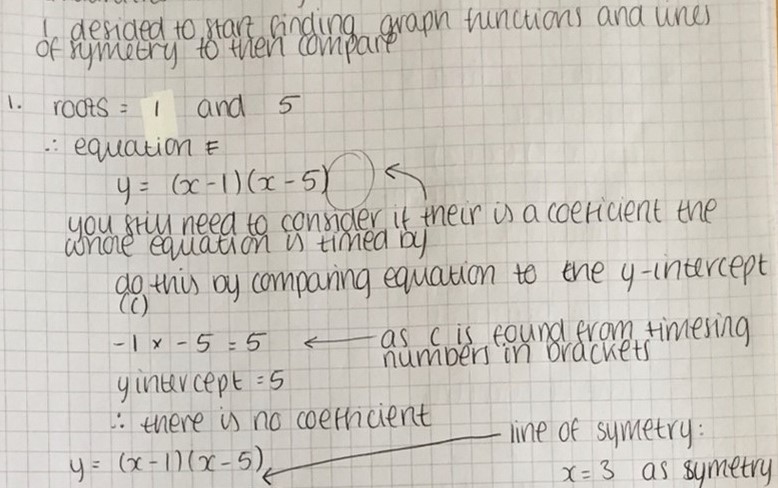 Click here to see Isabella's work for all of the graphs.

Well done also to Moses from Woodbridge School in England and Varun from International School of Geneva - Campus des Nations in Switzerland who sent in correct results.