Find all the triples of numbers a, b, c such that each one of them plus the product of the other two is always 2.

Five equations and five unknowns. Is there an easy way to find the unknown values?

Well done to Kaylie and Zoe and Alexis, Angus and Andrew and Aila from Frederick Irwin Anglican School in Australia, Charlie from Knutsford Academy and Adam_students from Torlands in England, and Sara, Theadora, Veesal and Lily A from Montpelier High School in the UK, who all found the four consecutive numbers which sum to $130.$ Kaylie and Zoe wrote:

Thea from Montpelier High School showed how to use trial and error to find the answers. Click on each image to enlarge it: 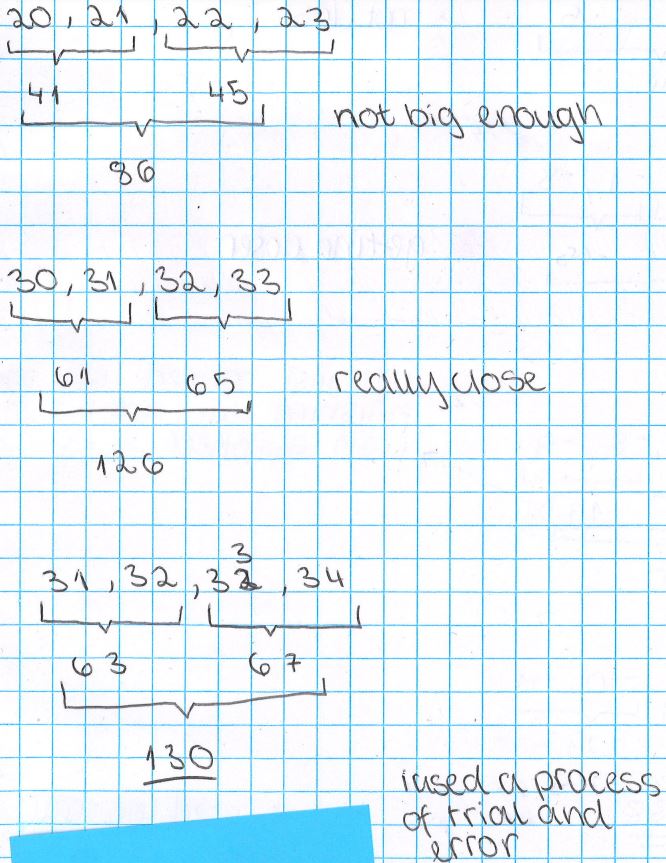 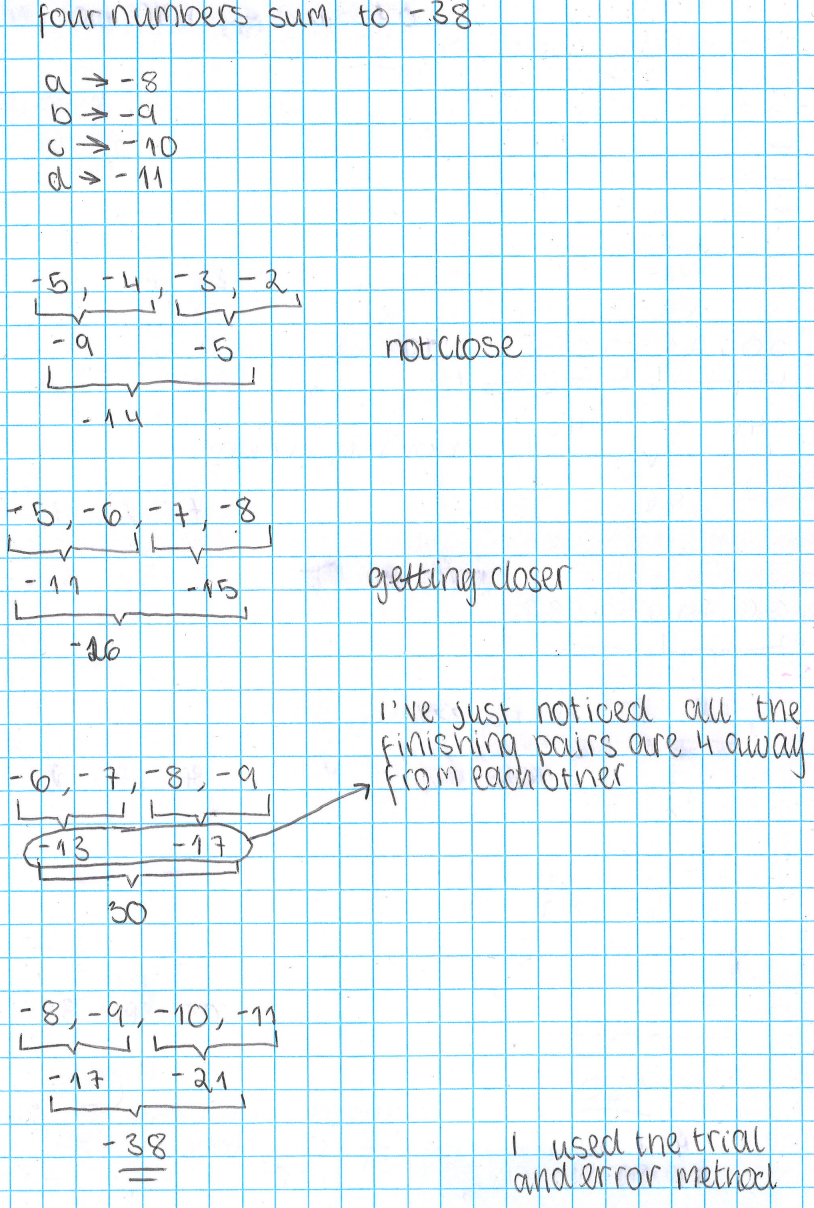 Ayub from Portland Place in the UK, Kaia and Salma from Monteplier High School and Arjun, Nathan, Yunsung and Savith from Wilson's Grammar School used ideas about the mean. Arjun and Savith wrote:

Samuel from the UK, Aritro from St. Christopher's School in Bahrain, Anna and Elizabeth from Withington Girls’ School in England, Eva, Vladimir, Arman, Ivan, Ivan, Ekaterina and Sama from CIS Skolkovo in Russia, Yuvraj from DPS Rajnagar in India, Roger from Westfield Academy in the UK, Nikhil and Adhiraj T from Wilson's Grammar School, Edith from The British School in the Netherlands (Senior School Leidschenveen), Yuk-Chiu from Harrow School in the UK, Theekshi from NLCS in the UK and Rishik K used algebra, starting from the first number $a$. This is Edith's work for part (a):

This is Eva, Vladimir, Arman, Ivan, Ivan, Ekaterina and Sama's work for part (b): 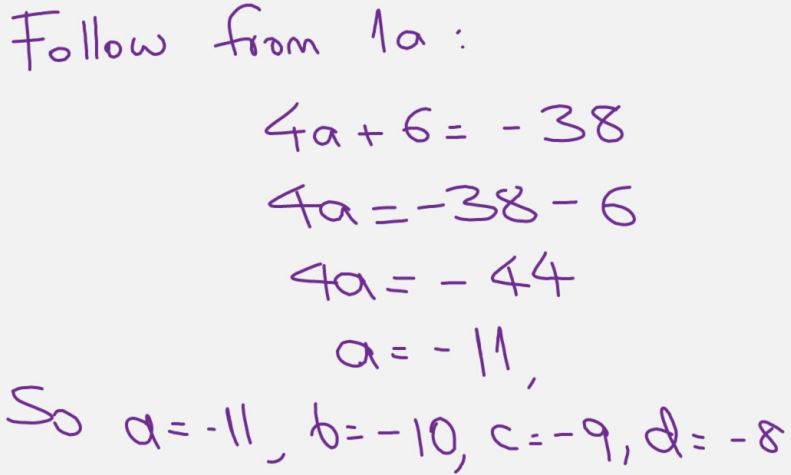 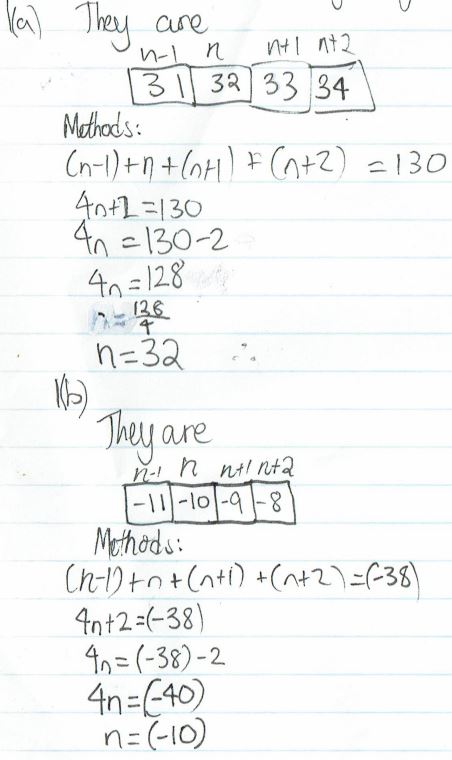 2. The sum of the first three consecutive numbers is $10$ more than the fourth. What are the four numbers? 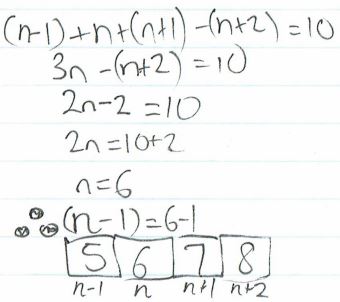 Yunsung, Kaylie and Zoe, Alexis and Aila, Angus and Andrew, Sophia, Charlie, Veesal, Sireene, Aroosa, Salma, Arjun and Savith all found a rule. This is Angus and Andrew's work:

Yuk-Chiu and Rishik K explained why the answer is always zero. This is Yuk-Chiu's explanation:

Ayub used a similar idea and thought about the sum of the four numbers: 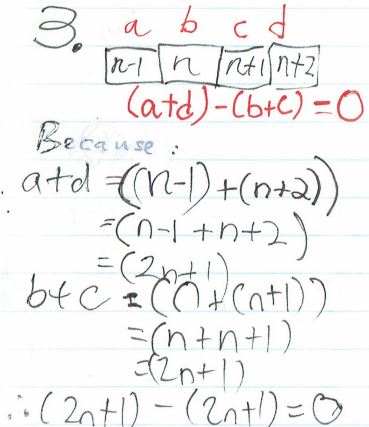 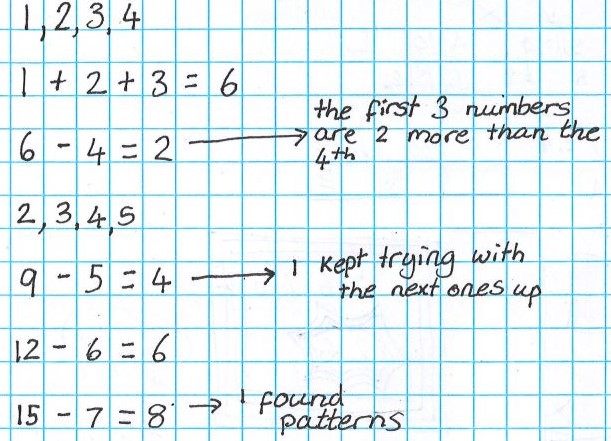 Angus and Andrew described the patterns:

They are always even number answers. To add to that every time you go up a digit from $1+2+3-4$ they will go up by two’s. 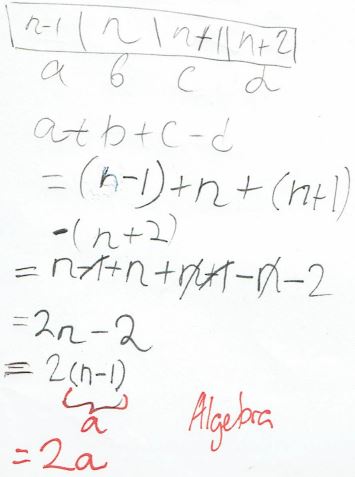