Three people chose this as a favourite problem. It is the sort of problem that needs thinking time - but once the connection is made it gives access to many similar ideas. 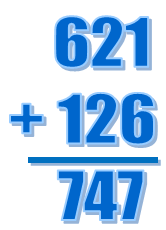 Can you find the other two ways of making $747$ in this way?

Which other numbers between $700$ and $800$ can be formed from a number plus its reversal?
There are more than five...


Can you explain how you know you have found all the possible numbers?

With thanks to Don Steward, whose ideas formed the basis of this problem.
The NRICH Project aims to enrich the mathematical experiences of all learners. To support this aim, members of the NRICH team work in a wide range of capacities, including providing professional development for teachers wishing to embed rich mathematical tasks into everyday classroom practice.