Fractions in a Box

This was a tricky problem. Well done to those of you who had a go. We had some very clearly explained answers. The key was to work out the size of the booklet first.

Hamish, Rory, Sarah, Jesse and Samuel from Rutherglen Primary also reasoned very clearly and they sent us a picture of the full box which they modelled using cubes: 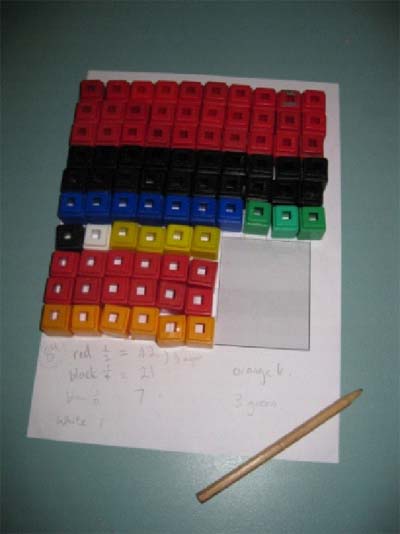 Sophie and Claire from The Downes School wrote:

Emma, Abi, Matthew B and Yuji from Moorfield Junior School; Keshinie and Sharon at Kilvington GGS Victoria, Australia; Gideon from Newberries Primary School and Hannah, Georgia, Patrick; Hana from Bali International School and Matthew from Brighton College Prep School realised that the number left after taking away the booklet must be a multiple of $12$. Keshinie and Sharon describe how they continued from there:

James from the Charter School explained very well how he went about the problem:

Well done too to Harriet and Harah from Greenacre School for Girls, Ruairidh from St Mary's High School, Anne-Marie, Emma, Katherine, Laura from Gorseland Primary and Eulalie and Holly who go to Lympstone Primary School.