Six Is the Sum

What do the digits in the number fifteen add up to? How many other numbers have digits with the same total but no zeros?

Here are some examples that were sent in:


Lucas from Powers Hall Academy in the UK, Jasmine and Ella from Cliffedale in the UK and Jack from Chandlings explained why the result is usually 1089 by looking at the sums. This is a mixture of their explanations:
Lucas: If you look, the 1st and 3rd digit cannot be the same, so the smaller number will have a larger 1s digit (as the larger number must have the larger 100s digit). You have to borrow. (998 reverse is 899. As you can see 998 has a smaller 1s digit than 899).

Jasmine and Ella: The tens digits (of the subtraction) are always the same and so [when] you borrow from the tens column, [you make] the top tens digit one less.

The only part that is still unexplained is why the first and third digits after the subtraction will be number bonds to 9.


Dylan from Gahanna Middle School South used the same technique, but with letters rather than numbers:
First, we have a three digit number with the reversal of it subtracted from it.
A    B    C
$-$ C    B    A
Since C is less than A we have to take one from B


Aanya from Arnhem Wharf Primary School in the UK, Kian from King Edward VII School in the UK, Freya from St Simon Stock in the UK and Matthew from George Watson's College used more formal algebra which led them to the 99 times table. This is the beginning of Matthew's work:
The sum is ABC $-$ CBA
ABC has an A in the hundreds column so is effectively 100A
It also has a B in the tens column so is basically 10B
And the C in the units column is just one C

Freya and Aanya checked all of the small multiples of 99 to show that the final answer will always be 1089. This is Freya's work: 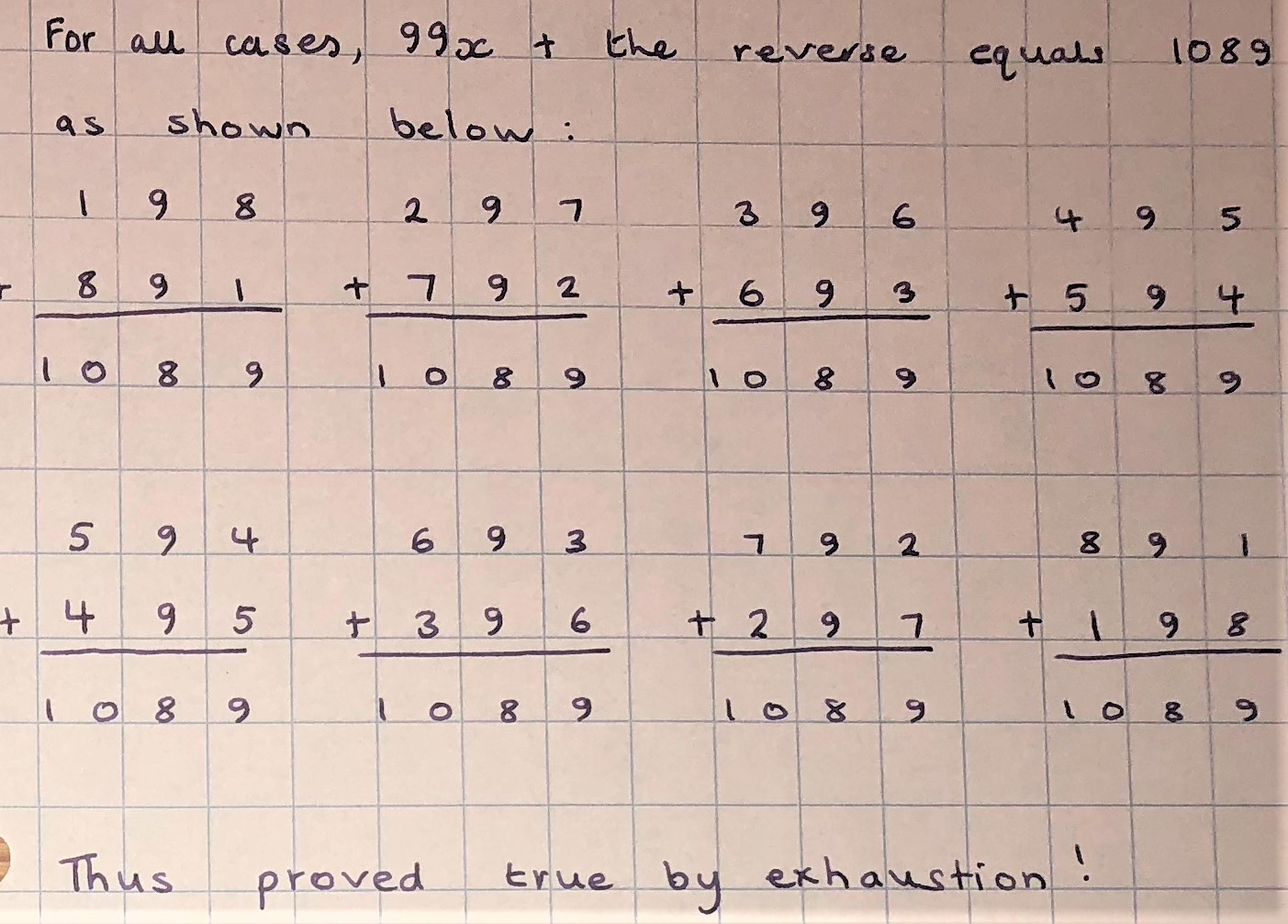 Matthew and Kian also looked at all of the small multiples of 99. Kian noticed the pattern that was described above by Lucas, Jasmine and Ella and Jack:
Notice that in all of these, the first and last digits sum to 9, and the middle digit is always 9.
Aanya explained why the first and last digits sum to 9:
We also know that 99x$-$99z is divisible by 9 because it could be written as 9(11x$-$11z). So we know that the last digit and the first digit add up to 9, because for all numbers divisible by nine the sum of the digits is nine.


Reyna from Downside School used algebra in this way, but a method similar to Dylan's. Notice that Renya points out that $c-a<0$, and this is how the numbers are regrouped for the column subtraction: 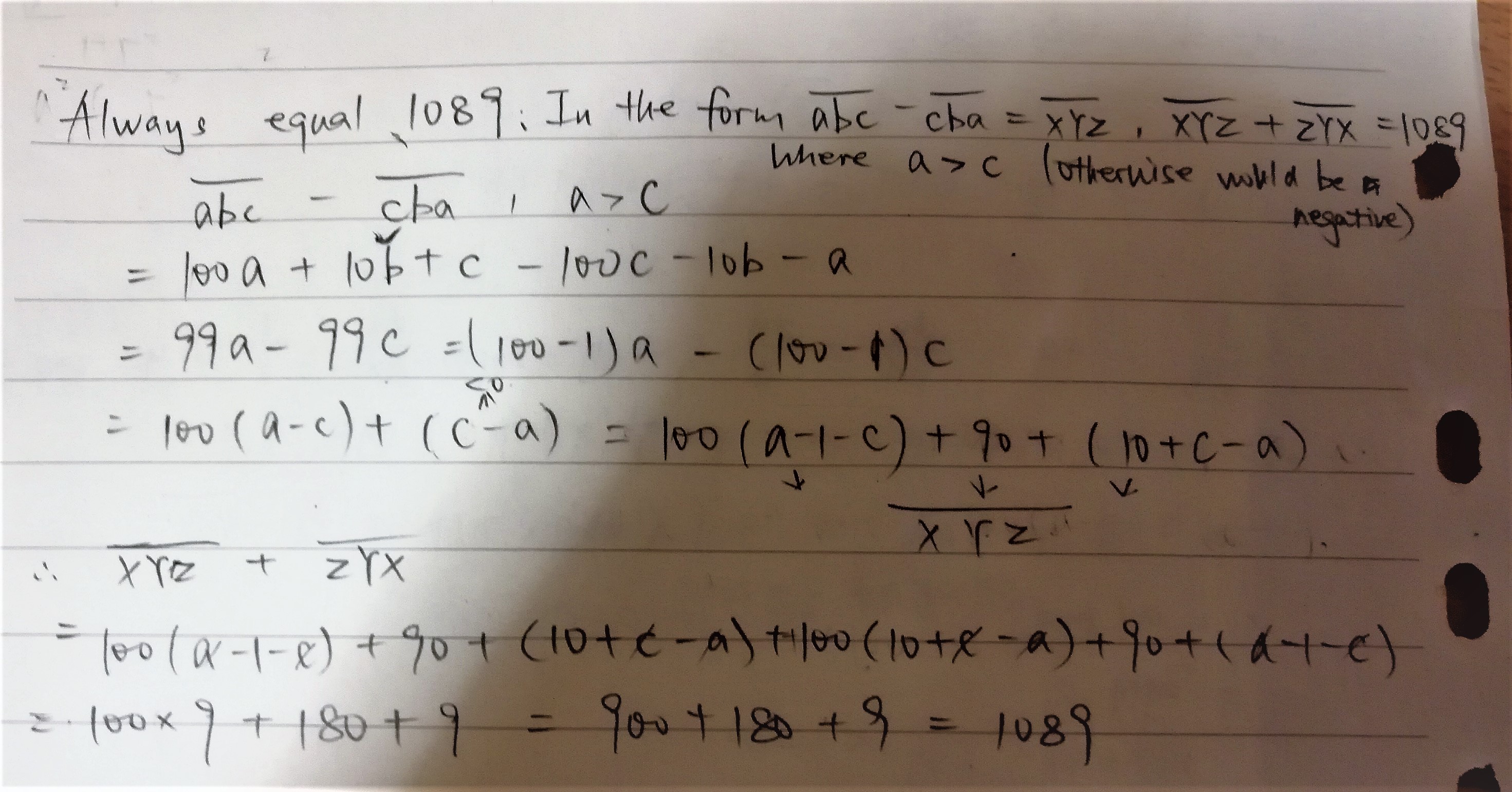 Johnny from Malvern College Chengdu in China used similar algebra, but instead of using a different letter for each digit, used only two different letters at a time. This meant Johnny needed to test out different cases, and each case corresponds to a multiple of 99. Click here to see Johnny's work.

For 5 digits we have:
$9999(10) + 999(10) - 9(10) = 109890$
The NRICH Project aims to enrich the mathematical experiences of all learners. To support this aim, members of the NRICH team work in a wide range of capacities, including providing professional development for teachers wishing to embed rich mathematical tasks into everyday classroom practice.