If you have worked through the other article in this module, you will have covered all of the crucial ideas behind continuous and discrete random variables. However, being able to perform tests on hypotheses for the particular parameters of a distribution is also extremely important. Thus, it is this we now turn our attention to.

So what is a hypothesis test? Well it is a means of making inference about the parameters of a distribution using data gathered from a study. We specify null and alternative hypotheses, which characterise two possibilities for our parameter. Mathematically, we want to determine if there is enough evidence to reject this null hypothesis. To do this we need a test statistic, and a critical region for this test statistic such that if it lies in this region we reject the null hypothesis.

Finally, we must concern ourselves with the chance of making a mistake whilst conducting this hypothesis test, and how to control the chance of making such mistakes. We say we've made a type-I error when we reject a null hypothesis that's true, and a type-II error when we accept a null hypothesis that's false. We want both of these things to happen with a small probability. Thus we usually determine our critical region according to controlling the type-I error. Type-II error can then be controlled relative to this by determining a sample size large enough or by setting an appropriate alternative hypothesis. If any of this is seeming unfamiliar, hopefully the example below should illuminate things far better.

Now, let's test our skills with hypothesis tests. Below is Question 14 from 2004 Paper III. This question should help you appreciate all of the basics behind hypothesis testing. 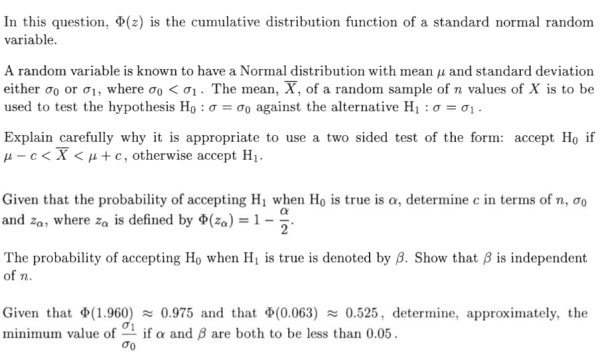 Thus, for both of these conditions to hold, we must have:

And that's the question done. This wasn't an easy one, but it covers all of the key elements of hypothesis testing: get to grips with it and you will definitely be ready to attempt some questions yourself.

So what have we learnt above? Well, as with any area of mathematics, in order to have the best chance of completing a STEP question you should make sure you can complete the relevant questions you've covered in A-Level without difficulty. Make sure you know the properties of the key random variables, and are comfortable working with them. Then, go ahead and get practising!
The NRICH Project aims to enrich the mathematical experiences of all learners. To support this aim, members of the NRICH team work in a wide range of capacities, including providing professional development for teachers wishing to embed rich mathematical tasks into everyday classroom practice.