Bipin is in a game show and he has picked a red ball out of 10 balls. He wins a large sum of money, but can you use the information to decided what he should do next?

Mrs. Smith had emptied packets of chocolate-covered mice, plastic frogs and gummi-worms into a cauldron for treats. What treat is Trixie most likely to pick out?

A Bit of a Dicey Problem

A Bit of a Dicey Problem 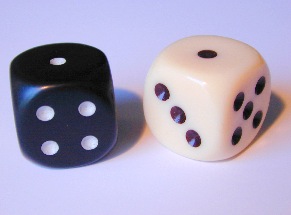 Look at these two dice. If you add together the numbers of dots on them, the total is $2$.
When you roll two ordinary six-faced dice like these and add together the two numbers, what results could you get?

Do you have more chance of getting one answer than any other?

If so, what is that answer?  And why? 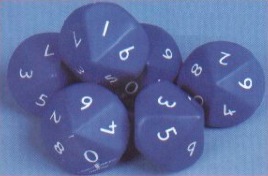 What answers could you get now?
Do you have more chance of getting one answer than any other?
If so, what is that answer?  And why?

Now try with more dice or a mixture of dice. What do you notice now?

This problem gives plenty of chance for practising addition in a meaningful context whilst avoiding the monotony of doing a set of written calculations. As the context is an investigative one, the teacher will have plenty of opportunity to observe the children at work and assess their skills, with addition in the first instance. However, subtraction and multiplication may also be possible if you change the operation in the question. The game is also an opportunity to model working systematically.

This is a low threshold high ceiling activity that would be suitable for a range of pupils and enable them all to be working on the same activity but using different skills to reach their conclusions.
Introduce the task by getting the children to throw two dice in pairs with one throwing the dice and one recording the results. If each pair in the class records their results for 5 throws then collectively they can make a conjecture about what the outcomes may be.
After a number of trials they may be willing to make a hypothesis about the most likely result. It is important to press them to offer a rationale for their choice at this stage. They may be willing to justify their choice on the basis of an argument that doesn't involve collecting lots of examples or they may only be prepared to use the evidence that they have gathered.
They could record their arguments and justifications by using a video camera, or on paper and then share them with the rest of the class at intervals during the lesson.

What results can you make?
How can you be sure you have considered all the possibilities?
Are you getting one result more often than the others?
What do you notice about the number of 1s, 2s, 3s,... that you have?

Consider other operations such as the difference between the numbers or the total on the white die subtract the total on the black die. What possible results would these give? Why? Which would be the most likely now?
Consider other polyhedra dice or a mix of different dice.
What about dice that have different sets of numbers on them, such as a six sided dice having 2,4,6,8,10,12 on the faces?

Some children will need to spend longer convincing themselves about the possible answers to the addition sums and even to use apparatus to help them. Allow them the time to do so. If children work in pairs then this often helps them to articulate their thinking to one another, which will help them both. The child who has 'got it' will clarify their thinking as they explain. The one who hasn't should be encouraged to ask questions until they do understand. It is the repsonsibility of them both to ensure that they are secure in their understanding of what they are doing.