How many DIFFERENT quadrilaterals can be made by joining the dots on the 8-point circle?

We had a good number of solutions come in for this challenge. Firstly, we had a few solutions from children at Peak School in Hong Kong:

The way I started off was seeing which number around the outside would be obvious. I saw the 49 and I knew that it would be 7 x 7.

From doing that, I figured out the doubled number and what the black number to the right of 42 would be: a 6.

Then I
filled out all of the rest of the times tables. This is how I figure out the solution to mystery matix.

Students from 5T at Ivanhoe School in Melbourne, Australia, sent the following picture of their completed grid, which agrees with Holly's fantastic reasoning above: 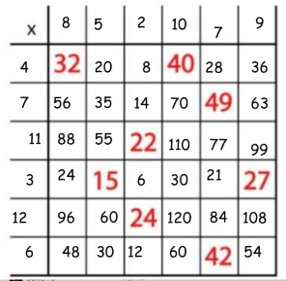 Pupils from Sefton Park Junior School in Bristol sent in the following:

To solve this problem, we first looked at the example grid and noticed that the numbers in red were answers to times table questions. The questions were written in black. Once we understood how the times table grid worked, we started trying to find the missing numbers.

First we looked at the multiples and tried to see which numbers we could multiply together (factors) to make that answer. We knew that 15 and 27 are both in the 3x table so that 3 could be filled out. We know 3x5 is 15 and 3x9 is 27.

A learning point for all of us was when we discovered that the only way to make 49 was using 7x7. Then we knew we couldn't use any other number twice. From that we could work out that 7x 6=42.

Once we discovered all of the factors, we worked out all of the multiples!

We solved this problem by working systematically.
The first thing we looked at was the number 49. The factors for 49 are 1, 49 and 7. The only one we could use was 7 so we knew that the row and column with 42 in had to be 7. This also meant that no other number could be repeated from now on. Looking at the bottom row we now knew this had to be 6 as 6 x 7 = 42.

Looking down the column with 22 and 24 in tells us this had to be the 2x table meaning the corresponding rows were 11 and 12.

We then used the numbers to fill in the remainder of the times-table facts.

It was really good to hear about your different approaches, thank you for your well explained solutions.