Integration crops up in lots of STEP and other advanced mathematics examinations questions, so it's a really important topic to work on in your exam preparation.

First and foremost, I would advise you to do lots of practice at straightforward integration questions so that it becomes second nature for you to integrate simple expressions without having to stop and think. This is the same more generally in your STEP preparation - you should aim to be fluent in basic algebraic skills, graph sketching and so on, and be able to recall or quickly derive any formulae you might need.

Think of a footballer who plays at an extremely high level. In order to be able to win matches, he needs to be fit enough to run for 90 minutes, and he needs to practise kicking the ball so he knows exactly where his passes will land. Developing his passing skills so they are almost instinctive frees up his mind for reading the game, noticing where other players are, and so on.

In the same way, for your STEP or other advanced mathematics examinations preparation, you need to develop the mathematical stamina to sit and work on mathematics problems for three hours. You can do this by gradually building up the number of hours you do in one sitting - working through the NRICH Advanced Problem Solving modules would be a great way to do this! You also need to practise all your basic skills to free up your brain for the problem solving. If you have to stop and think about how to solve a simple integration, it diverts your attention away from seeing the bigger picture.

While you are training yourself to solve routine integrals, start to look at where integration crops up in the exams questions. Some questions are solely about integration; we will look at one in more detail below. In addition, there might be one step of a question which involves integrating something - for example, there might be a differential equation to solve, or a mechanics problem where you need to integrate a velocity function, or an area to be found. Sometimes it's obvious that a question requires integration, because you see an integral sign! At other times you will need to deduce that integration is either necessary or a useful method of solving the problem.

For questions solely about integration, there is a common pattern where the first part of a question invites you to use skills such as integration by substitution or by parts to evaluate some integrals, and later parts of the question give a related integral requiring you to spot the connection with what you have already done. In fact, this is common in many STEP and other advanced mathematics examinations questions; if there is more than one part to a question it is often the case that you can use your answers to earlier parts to solve the later parts. 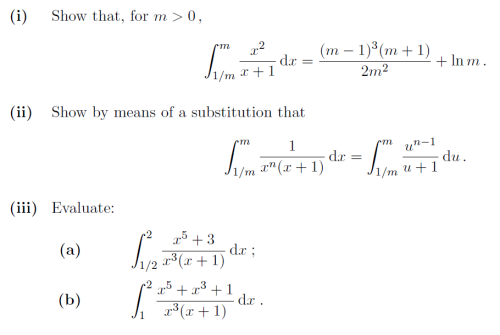 In part one, you are given an integral with a quantity $m$ in the limits and asked to show that it gives a particular expression in terms of $m$. There are different ways to approach; I decided I'd be happier with an integral of the form $\frac{f(u)}{u}$ so I used the substitution $u=x+1$.

Some people really like "Show that..." questions, because you have a definite end-point to aim for and so you know when you've got it right! Have a go at solving part one before reading on.

Even if you can't solve part one, you can move on and have a go at part two. Again, we're being asked to show something, and we've even been told that the appropriate method is substitution!
Think about it for yourself before reading my thoughts below:

Once you have deduced the appropriate substitution, it's just a case of more integration and algebraic manipulation. But you're getting good at that after all your practice...

Finally, a summary of things to remember: Now have a go at some of the integral questions in Advanced Problem Solving Module 10.
The NRICH Project aims to enrich the mathematical experiences of all learners. To support this aim, members of the NRICH team work in a wide range of capacities, including providing professional development for teachers wishing to embed rich mathematical tasks into everyday classroom practice.