This investigation could be revisited several times, trying different approaches each time. Encourage the children to discuss discoveries and suggest new things to try. For example, what happens if the square box is enlarged to include nine numbers, or a rectangular frame of six numbers? Test discoveries on other months.
Further explorations can be made by changing various parts and carrying out more investigative work. Here we see what happens when we pretend to have a four-day week and take our block to be 4 by 4.
The multiplication is done as follows; 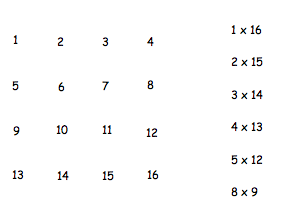 This forms the first block of answers in the following table. The table also includes some other pretend weeks. The answers to the 6 multiplications that can be done around the 4 by 4 square are then shown as well as the digital roots of these answers. 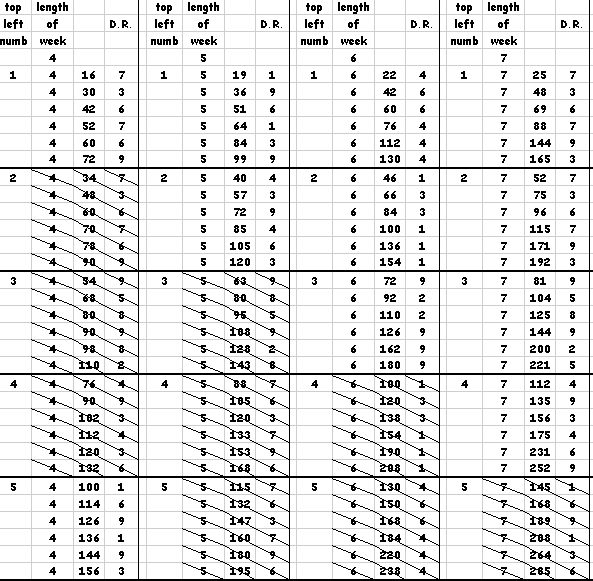 Some of the blocks of 4 by 4 would not work because of the short weeks - they are shown with hatching. The numbers 1 to 5 show the starting number for each 4 by 4 block. Having given you this starting point, pretend weeks of different lengths could be explored in a similar way.
I found it very worthwhile to explore the digital roots that resulted. You can then change the size of the blocks and continue with more investigational work.
When working with your pupils in opening out a challenge it's really good to get some first results from a change in the question and then ask the pupils, "what do you see?". Then it's a matter of being brave enough to follow some of those leads and not just push for what you have seen. You'll probably be very surprised about all the different things that come up which may lead to further investigations.
The NRICH Project aims to enrich the mathematical experiences of all learners. To support this aim, members of the NRICH team work in a wide range of capacities, including providing professional development for teachers wishing to embed rich mathematical tasks into everyday classroom practice.