Rida and Regan, Layan and Mariam, Parisa, Diana and Rehan, Halena, Oubaidah and Khaled, Muhammad, Dylan and Yousef, and Daniel all from Greenacre Public School sent in solutions.

Esme from Ambler School in the United Kingdom wrote:

First, I thought of the rhyme ''30 days hath September, April, June and November - all the rest have 31, except for February alone" then I realised that February must be the second month so I put it into place. Then I realised that January must start on the day before February starts, so I found one with 31 days, ending on the day February starts. Then I thought of March, so I found one with 31 days, starting on the day after Feb ended. Then I did the same thing for each month until I got to the end.

Lucia from Willowbank in New Zealand sent in this solution:

So, first of all, you find February, and you will know it is February because the end of the month, the last day will be the 28th. Now you have to find out what goes in front (January). how to do this is you look at the front of February and look at the date from the days. For example, February started with Saturday, so January must have ended on Friday because after Friday is Saturday. If there are two months ending with Friday, look at the date. January should be ending with the date 31st. Now you've got two months done!
Time for number 3! March! to find out what March is, you will have to look at February's end date. For example, February ended with a Thursday, then the calendar will start with a Friday! If both months start on a Friday, make sure March ends with a 31st! The fourth month is the same but ends with a 30th. The fifth month is the same too but ends with a 31st. So the pattern goes like this: 31st, 28th, 31st, 30th, 31st, 30th, 31st, 30th, and that's how you solve it!:)


For the first time we had a solution in from Malaysia. Dohyeon and Taegeon from Tunku Putra School wrote:

First, we started with February, because it is the only one with 28 days, so it is unique. Then, we worked out January. February starts on a Saturday, so we know that January must finish on a Friday and have 31 days. We know that March is 31 days and must start on a Saturday as February finishes on a Saturday. We then repeated this process until we got to September. The only tricky moment was there was a choice of two months that started on Monday, but the 30 days one was the correct choice.

This is our first solution from Shanghai. Julian and Hanusha from Western International School of Shanghi in China wrote: 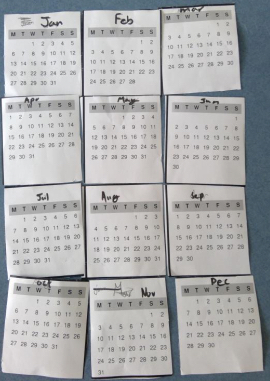 Thank you for all the solutions that came in, obviously, there was just the one correct solution.
The NRICH Project aims to enrich the mathematical experiences of all learners. To support this aim, members of the NRICH team work in a wide range of capacities, including providing professional development for teachers wishing to embed rich mathematical tasks into everyday classroom practice.