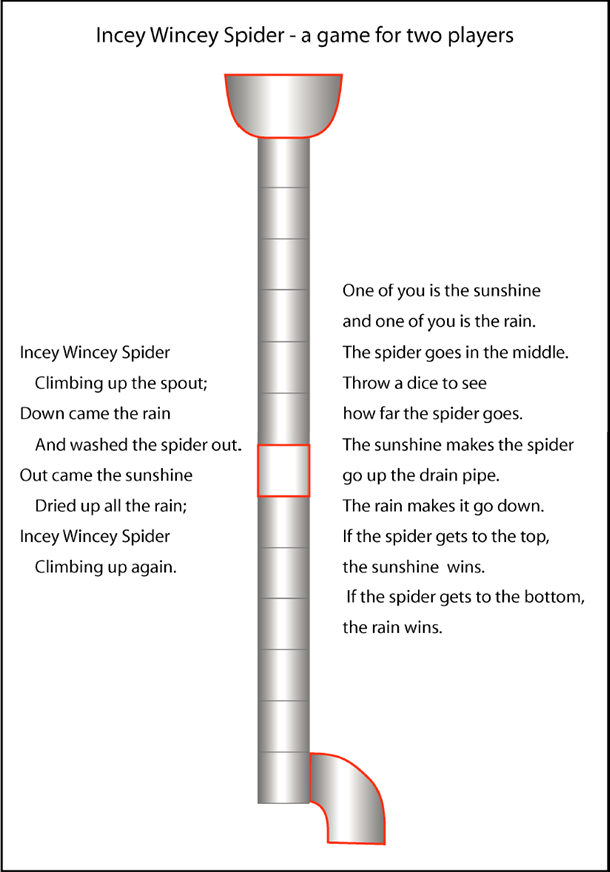 How do you play?
You'll need an adult to play with.
You'll also need two dice, a paper copy of the drainpipe (black and white, or colour) and a counter to be the spider.
Start by playing with one dice. You are the sunshine and the adult is the rain. Take it in turns to throw the dice and move the spider that number of spaces up (sunshine) or down (rain). If the spider gets right to the top of the pipe, you win. If it gets to the bottom, the adult wins.

How long does it take for the spider to reach one end of the drainpipe?

Notes for adults
This game is designed to get children used to moving along a track either side of a central point. This makes it a great precursor to negative numbers. It also introduces children to a vertical number track, which they may not have seen before.

Easier version: encourage children to say the rhyme moving their hands so they understand which way the rain and sunshine make the spider move. If players are still experiencing problems, try using a more familiar horizontal number track.
Harder version: there is a second version of the game in which players throw two dice and choose which number displayed to use. In this way, the players can move the number of spaces that suits them better - they have to reach the end of the drainpipe exactly. This is therefore at a higher level as a decision has to be made, rather than relying solely on chance.