Beginning with peg boards and developing ideas around pattern

Let's have a look at the activities that you can use with peg boards. They seem to be accessible to quite young children once they have the fine motor skills to handle the little pegs. You can start with them having total freedom to place the pegs wherever they wish. Maybe you would see they created something like this:

In my experience it's not long before they are placing the pegs in some kind of pattern. When working alongside a child who has started making a pattern we have to sometimes restrain ourselves from pushing the activity to advance more quickly than the child requires. So when we see something like this:

encouragement and praise are the order of the day. It may be appropriate to join in, (probably on another board next to theirs if the child is happy with that), and create a pattern that is similar to the ones that they have produced. I use the phrase 'to dangle a carrot' next, when you are testing the ground to see if the child may move on a little at a time. If the child does not take 'the carrot' then we probably have to acknowledge that this is where they are at and they need a good time to consolidate and feel true ownership of what they are doing.

The 'carrot' will vary according to what they have been doing. It is likely that their first patterns have been simple and they have been able to say it - “red, green, red, green ...”. If that is the case I would start by saying, “I'm going to make one like yours but this time I'm going to use three colours”. Their response determines what happens next and, of course, there is no set rule or dialogue to be had, we are just being the 'co-player'. (A 'co-player' being one who is able to enter the child's play with sensitivity and unobtrusively in order to develop their talk and learning.$^1$) So you create something like this;

When a child has started much more confidently an alternative 'carrot' could be introduced by a conversation starter such as; “Tell me about this,” pointing to their pattern. They may respond with something like, “It goes red, green, red, green ...” and they tell you confidently about all the other patterns they have done which you see as being similar.

The process goes on and may end up with some patterns like these:

Then there is an opening for all kinds of good talk about what the child has done and sees in what they have produced.

I have gone into a lot of detail with that first example with the strong belief that IT'S NOT WHAT YOU DO IT'S THE WAY THAT YOU DO IT.

Let's have a look at a pin/nail board activity for children a bit further on in their development.

Some schools have pin boards with the nails now replaced by plastic. The pins/nails are often much too near to each other to be most useful. Some other schools use a whiteboard interactivity or a computer simulation. At NRICH, we have a virtual geoboard interactivity which can be either circle or square based.

With a small setup with just a 3 by 3 or 5 by 5 pin grid a lot of experimentation can go on with making triangles or squares. Providing the manipulation is not too difficult it's very pleasing for the children to create so many different triangles. After a time to experiment you may choose to come alongside the child observing a recent triangle like: 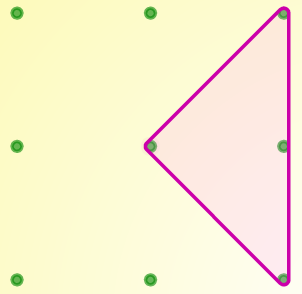 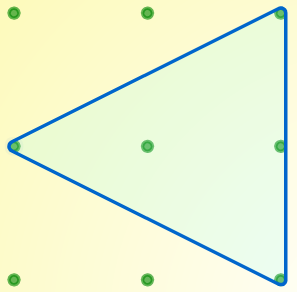 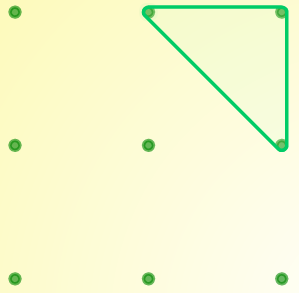 which easily leads us into a conversation with them about the triangle that they have created. It may be useful to have a record of the one they've just made. You may be able to do that with the technology available or else have some dotted paper cut to size that allows you to quickly draw it. It's good to tell them that you are going to make a copy of it, and when you've done it to check it with them that they are happy with it. (I feel that it is important that you are using paper that only shows the number of pins that the pupil has available.)

Questions like “Could you make others like this one?”, “Tell me about the triangle,” and “Could you make a smaller/bigger one?” all have the potential of engaging with the child in an encouraging way.

You might be going for squares instead, in this case something very similar can occur: 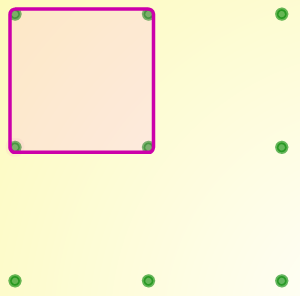 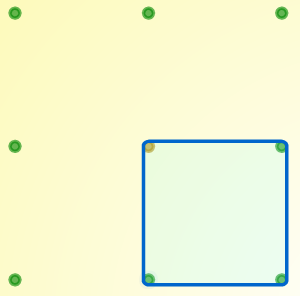 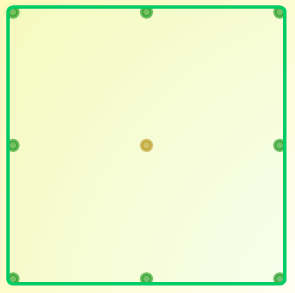 You may decide that a 5 by 5 grid is more useful for squares. So you leave the child to explore and come alongside and talk about their latest creation. 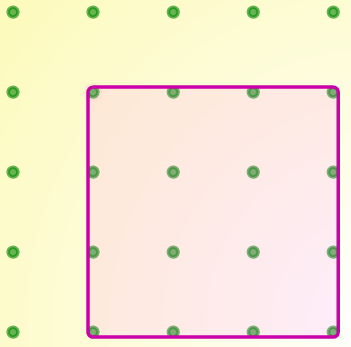 Recording and conversation can go along the same lines as with the triangles.

You may feel that some children could be introduced to the ideas shown below for generating squares: 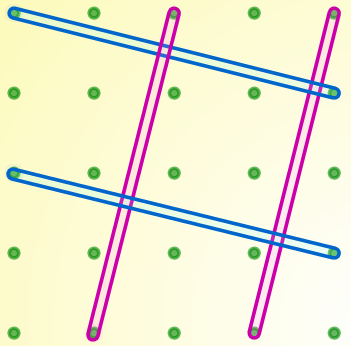 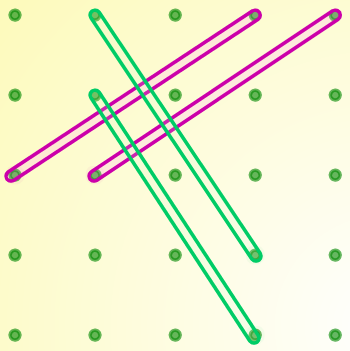 The same idea can of course be used for generating triangles: 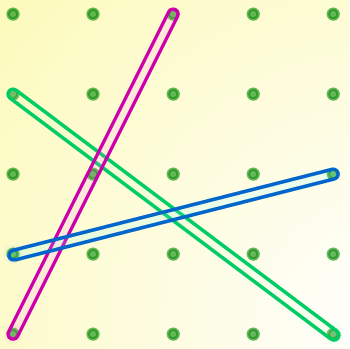 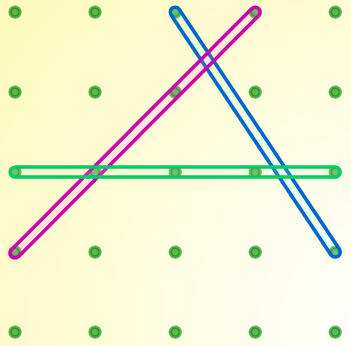 Activities associated with the use of pin boards can be found on the NRICH website:
Board Block
Board Block Challenge
Happy Halving
Inside Triangles
Quadrilaterals
Nine-pin Triangles
Triangle Pin-down
Tri.'s

All of these are excellent resources for helping children develop their concepts of shape and space in a practical way.


References
1. R Bayley & L Broadbent in Like Bees not Butterflies, Ed by S & P Featherstone A C Black 2010
The NRICH Project aims to enrich the mathematical experiences of all learners. To support this aim, members of the NRICH team work in a wide range of capacities, including providing professional development for teachers wishing to embed rich mathematical tasks into everyday classroom practice.