We had a good number of solutions sent in for this challenge, here are a few to think about.

Shivoham from Robin Hood Junior School sent in the following: 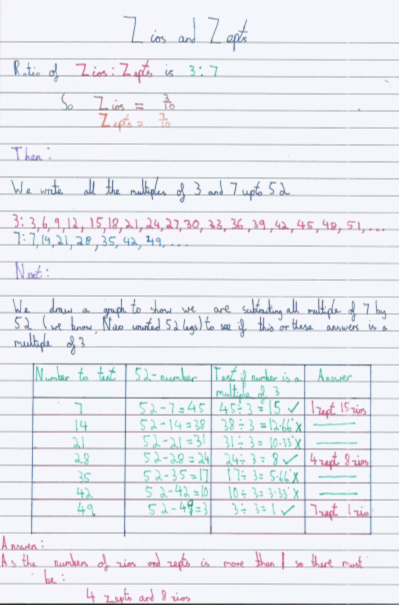 From Hamilton South Public in Australia we had a few submitted solutions:

There are 4 Zepts and 8 Zios
At first I tried to do it in ratio but it didn't work.I would write out the timetables of three and seven and then find out numbers that give a sum of fifty-two. Ratio does not work because (seven is to three )-the ratio- are not equal in one portion.My words may be rather. You could also approximate fifty two and use times tables to help you work
the main answer out. I could not find out any corresponding ways to get fifty two and would be grateful to get another answer that doesn't match mine. Below,I have uploaded a file that you may want to consider seeing as it should help you if you get stuck.I hope it is of help to you. Please consider my working out as I could not think of any other way to
come across the answer and would be happy to come across the method if
there is any. I hope this has come to use of you if any use.

Anaya from GEMS Willington Academy-AlKhail in the UAE:

Great! You have worked hard on getting solutions and there are some good explanations as to how you went about finding solutions.
The NRICH Project aims to enrich the mathematical experiences of all learners. To support this aim, members of the NRICH team work in a wide range of capacities, including providing professional development for teachers wishing to embed rich mathematical tasks into everyday classroom practice.