For three items whose prices add and multiply to £5.88

Erin from York House School in Canada used a method similar to Alison's first method:
First I put 1 as one of my numbers because any number multiplied by 1 equals that number. Next I tried a bunch of numbers after that without 1 just to see the answer. You can see this in the first 4 lines of my work:

(Note that Erin has written + between each number, but in the fourth line, she has worked out the product, rather than the sum. The sum is 5.88.)

Then I realized that I was not making that much progress so I asked my teacher. She gave me a hint that was just very useful.

The hint was: 'When you add 2 + 2 you get 4. When you multiply 2 $\times$ 2 you get 4. You are looking for a number that you can multiply and add together that gives you the same answer.'

(Note that for each line Erin has chosen three numbers whose sum is 5.88, but then worked out their product, rather than their sum.) 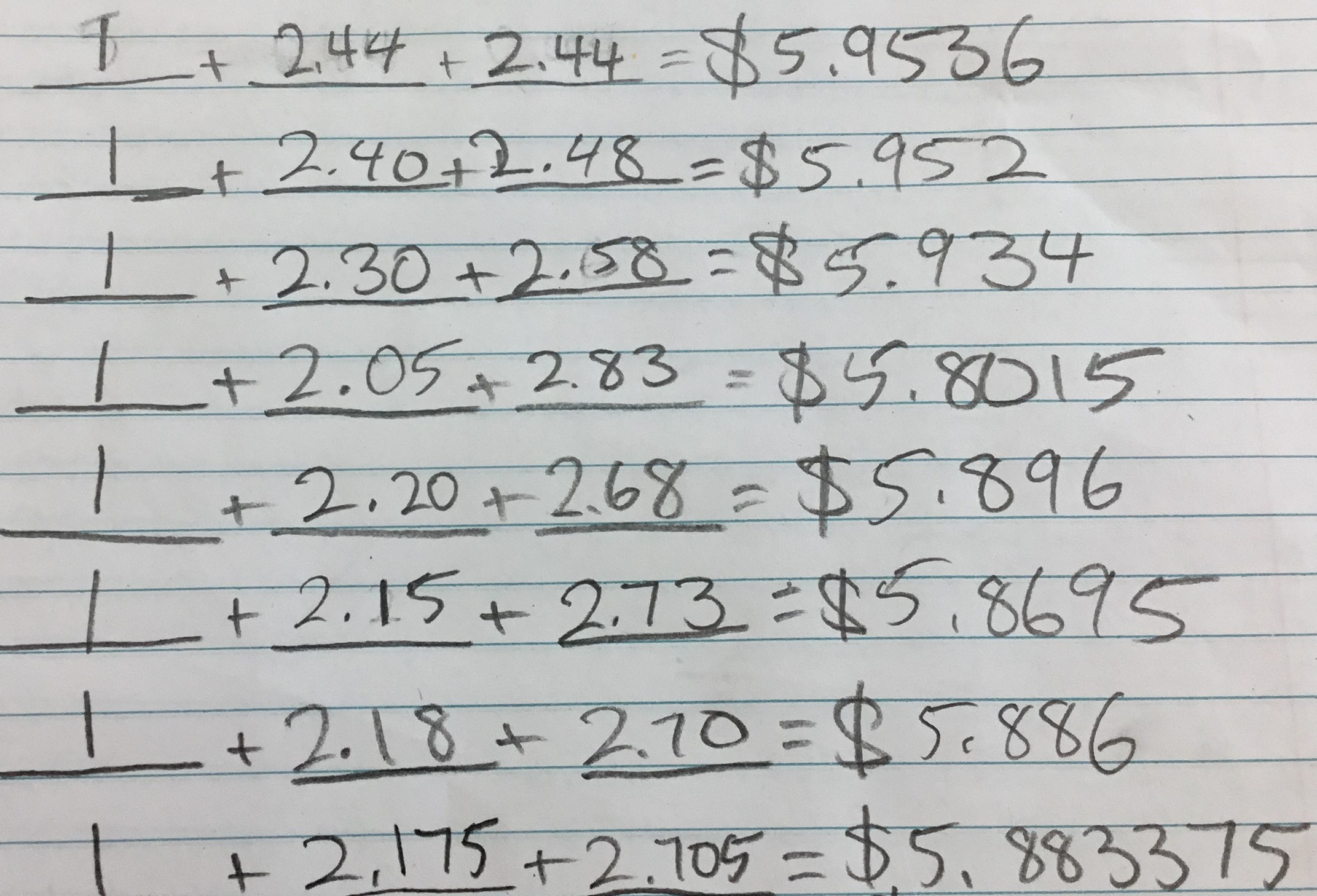 Siddhant continued:
We must then find the factors of 5,880,000. The factors are:

Now, we must arrange these factors in such a way that when multiplied, they add to 588.

One way of doing this is by using the unit digit (8) to our advantage. We know that 2 cubed is 8, and therefore we would need multiples of 10 to get to the sum of 588.

However, [when one of the numbers is 8,] there is no combination of [the other factors] which [sums] to exactly 588, as it was either too big or too small. Therefore, it becomes apparent that we have to increase the number ending in 8. One way of doing this is by one number being 98 (7$\times$7$\times$2). That leaves us with 490 to get.

After a number of possible combinations, the other two numbers are:

So these simultaneous equations cannot be solved.


For other shopping baskets
Shriya from International School Frankfurt in Germany used Alison's method for the next two baskets. Click here  to see Shriya's concise solution.

Well done Luis - this almost proves it. Unfortunately you haven't shown that there aren't any other combinations where the final $1$ comes from adding $3$ of the units digits. For example, if one of the items cost $79\times3$ and had a units digit of $7$, Luis says that another item would need to have a units digit of $4$. But instead there could be two numbers, whose last digits are $2$ and $2$, or $1$ and $3$, or even $6$ and $8$.


This is how Dominic did it. This isn't the exact text of Dominic's program, but is pseudocode which you can easily convert into a programming language if you want to try it out!
Let 'total' = 7.11, 'product' = 7110000 (product in pence), and 'conversion factor' = 1000000 (conversion factor between products in pounds and pence).

The maximum value for the smallest number will be total/4 rounded to 2 decimal places.

This program actually outputs 6 solutions, but they are all the same 4 numbers in different orders. To rectify this, you could change the 'for' loops, so that j begins at i and k begins at j (instead of both beginning at 0.01). This will also make the program faster.

The multipliers are simple fractions like $\frac12$ so that the new number is still a whole number of pence in each case.