Can you work out how the numbers in the upper layers are generated?
Bela from QASMT and Nabiha and Shahzaib from Greenacre Public School in Australia, Muhammad from Walton High School in the UK, Shriya from International School Frankfurt in Germany and Philip and Ikhee from Dulwich College Seoul in South Korea worked this out. Muhammad sent an example:

Umar from Greenacre Public School, Daniele from Southlands International School in Italy, and Tuáº¥n Vé from British Vietnamese International School Hanoi in Vietnam used this method, described by Umar, to find the number at the top of the pyramid without finding the numbers in the middle:
To find the top numbers, you must [add] the edge numbers and add the product of the middle number and two.

Given any three numbers for the bottom, the largest possible top number can be found, placing the highest number of the three in the middle.


Anh Minh from British Vietnamese International School Hanoi, James, Minoo and Jay, Julie, Kristin, Lily and Ji Hyo from Dulwich College Seoul, Kelvin from QASMT, Rik from G.D.Goenka World School in India, Connor from Tanglin Trust School in Singapore, David from IES Maximo Laguna in Spain and Philip and Ikhee used algebra to find the top number without finding the middle numbers. This is Anh Minh's work:
Lets say this is the pyramid


Kelvin, Julie, Kristin, Lily, Ji Hyo, Philip and Ikhee explained why the order is important. Kelvin wrote:
If we switch the numbers in the bottom row, $a$, $b$ and $c$ will be switched.
Because $a+2b+c \ne b+2a+c ...$ etc, the number at the top will change.


Julie, Kristin, Lily and Ji Hyo explained how to get the largest possible number at the top:
The number that is being added twice ($b$) should be the largest because despite the two edge numbers changing sides it won't make any difference to the value of the top number


If I give you a target for the top number, can you quickly find three possible numbers for the bottom?
Raffaele and Shriya worked backwards from the description of how to find the top number from the bottom numbers. This is Raffaele's work:

Daniele used a similar method involving subtraction:
a) First find two possible numbers that add up to the top number (e.g. if the top number is 27 it could be 13 and 14).
b) Then find one number that can be subtracted from both numbers (e.g. 13$-$6 = 7 and 14$-$6 = 8)
c) The two result numbers obtained from the step above (e.g. 7 and 8) go on the sides of the bottom layer
d) The number used to subtract in sten b) goes in the middle.


Connor and Kelvin used their algebraic expressions. They both chose the numbers at the edges first, and then worked out the middle numbers.
Kelvin:
Let the top number be $y$. 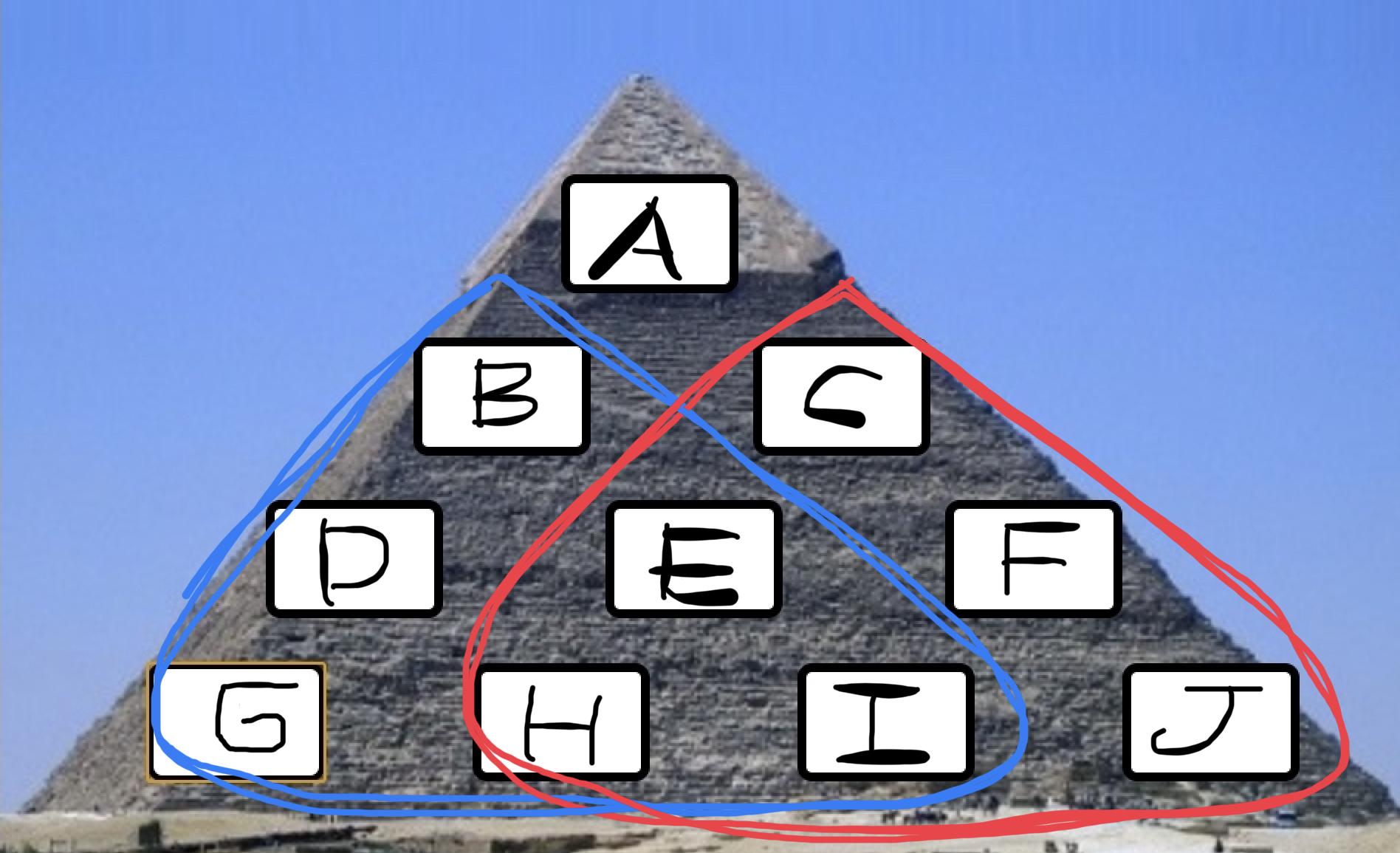 You can use information from 3 layer pyramid.


David sent in a method to choose numbers at the bottom of a 4-layer pyramid to get a target number at the top:

Thomas from Southlands International School had an idea about 5-layer pyramids:
To find the number at the top you have to find the mean average of the numbers at the bottom, then times it by a constant.

Thomas' method works in these examples, but it won't always work. Can you work out what is special about Thomas' exmaples?