Neel from Zurich International School in Switzerland, Miraya from Heckmondwike Grammar School in the UK and Skyler explained, in general, how to arrange the digits to get large numbers. Miraya wrote:

Victoria and Michelle from Westridge in the USA and Miraya explained how you can tell if a number is a multiple of 2. Michelle wrote:

The thing that is mandatory for a multiple of 2 is that the ending of the number needs to be a multiple of 2. You can think of it this way. Multiples of 2 are 2 multiplied by another factor. It doesn't matter if the factor is odd or even. If you double any number, you are essentially adding the number to itself which always ends up even. You can try it out for yourself. Just remember, the last digit of a multiple of 2 needs to be even.

Isabel from Aiglon in Switzerland sent in some examples of finding the largest 3-digit multiple of 2:

For example use 8 and 8.
8 is a multiple of 2 and is also the largest multiple before you get to the next unit of tens - so it should be the last number.
So we have: xx8.
For the first unit, with the [place] value of 100, 8 could be used, however it's not the largest integer before 10. Therefore, to give the largest possible number, you could put 9 as the first value. Now we have 9x8.
The missing value is 8, so we can substitute it in, giving us 988.

Take another example, 3 and 7.
Notice that both of these numbers are odd numbers, meaning the final digit won't be 3 or 7. So the highest multiple of 2 before 10 is 8 (if you go above 10, the [tens digit would change] so the solution would be incorrect), meaning the final digit must be 8. We are left with xx8.
Now you are left with 3 and 7 to substitute into the 3 digit number.
Look at the values, clearly 7 is larger than 3, so if it's the first digit of the number it will produce the largest multiple of 2.  We are left with 738.

Giancarlo and Kayowa from Monarch Global Academy in the USA, Skyler from Westridge, Adavya from St Paul's Juniors in the UK, Sara and Kate from University of Chicago Laboratory Schools in the USA, Yash, Arnik, Arnav and Abhiram from Wilson's School in the UK, Thomas from Dulwich College Beijing in China, Daniel from DGS in the UK, Michelle, Neel and Matthew all described a general method for this.

First of all, if any of the two numbers given is even, the first digit will be 9 as any three-digit number starting with 9 will be larger than any three-digit number starting with another digit. Then put the even number as the last digit, or if both other numbers are even put the smallest number as the last digit. If both digits are odd, make the last digit 8 as it is the largest even number and put the other two odd digits in descending order as the first and second digits.

Good idea, Adavya - we can also see the same method explained in Sara and Kate's slideshow. 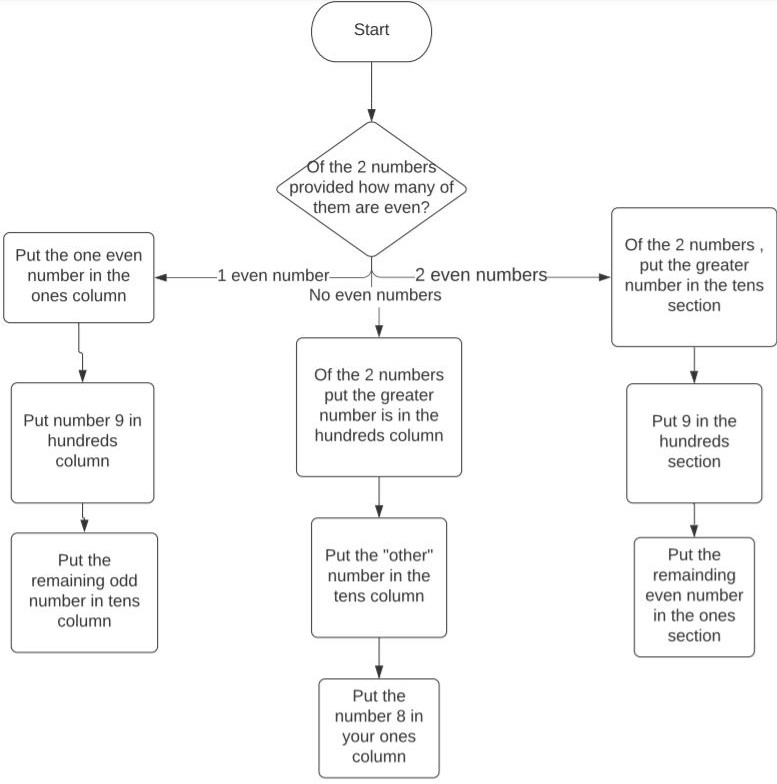 Miraya and Victoria explained how to check if a number is a multiple of 3. Victoria wrote:

Abhiram described how to make 3-digit multiples of 3 using two numbers from the computer:

Zaid from Wilson's School described how to do this for numbers with a four-digit target number, where the computer gives you all the digits but one:

Miraya explained how to check if a number is a multiple of 4:

A number is divisible by four if the number made by the last two digits can be divided by 4.

Abhiram described a method for finding three-digit multiples of 4:

Find the largest double digit number that uses at least one of the two numbers given and is a multiple of 4. Place these two numbers in the last two boxes then fill the first box in with the other number given by the computer (or with a 9).

Let's say the numbers are 9, 7 and 3. Since all these numbers are odd I would put these in descending order like 973. The divisibility rule for 4 is that the last two digits are divisible by 4. So the only numbers divisible are 32 and 36. 36 is greater so we will take 6 and the number would be 9736.

A number is divisible by five if the last digit is a 5 or a 0.

Miraya described how to tell whether a number is a multiple of 6:

Neel explained how to find the largest four-digit multiple of 6 (with three numbers from the computer):

In that example, the number added to make the multiple of 3 didn't have to be even. You only have to choose an even number if all the other numbers are odd, for example:

Miraya described how to identify multiples of these numbers:

Nathan from Dulwich College Beijing described how to choose a multiple of 12:

For 12 we only need to find a number that has the last two digits divisible by four and the sum of digits equal to multiples of three.

Once we know what our tens and units numbers have to be, we can make the biggest possible number using the remaining three digits:

Well done to everybody who worked out that 54,312 was the largest possible number! We also had excellent explanations for this sent in from Ziji from Mounts Bay Academy in England, Ronik from Wilson's School in England, Venus, Arin and Tan Kiu from Harrow International School in Hong Kong and Nirdvaita from Boone Meadow Elementary in the USA. Thank you to everybody who sent in their ideas.