Joshua from Brooklands Primary, Brantham, Suffolk has sent in his first solution - and it's excellent!

First of all I realised that you couldn't seat 44 people around 15 single tables so I started to work out how many people could sit around a certain number of tables pushed together. I made this chart:

I then noticed that even if you pushed all the tables together you could only seat 32 people.

Then I saw that 6 single tables would sit 24 people (6x4). I would have 9 tables left which could sit 20 people if tables pushed together. That's my solution!

Jade ( Tattingstone Primary, UK) noticed a pattern in the number of people at the tables too.


I worked it out by timesing 4 by 15 which is 60 places and you only need 44. And every time you join a table you lose two places. So kept joining until I had one table of 8 and 6 tables of 6.

First put nine tables together in a line, which will have 20 people sat there. Then have six tables on their own with four people round each one, That makes another 24 people to give 44 altogether.

During the early part of 2015 we had a number of solutions sent in, in the form of some pictures from Year 6 at Riverdale primary School in Redcar.
Here is a bit of one of them 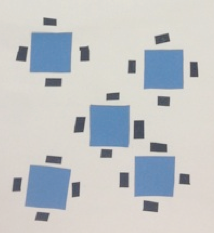 You can see all the results here .doc or.pdf

Thank you for these latest ones.