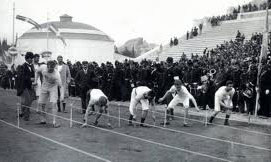 I wonder how far you could run in $12$ seconds.

You and your friends could use a stop watch and then measure how far you ran. 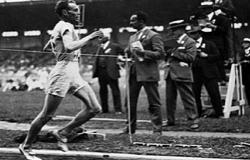 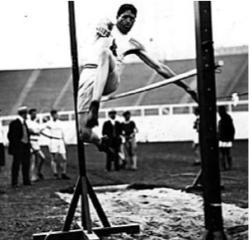 This is the high jump in $1906$. It shows Ray Ewry from the United States.

Can you find someone who can jump that high?

This is the triple jump, which is a hop, step and a jump.

In $1906$ it was Peter O'Connor from Ireland who won a silver medal.

He jumped about $15$ metres

What's your best hop, step and a jump? 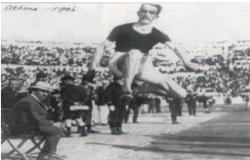 This activity looks at some historic Olympic results and asks children to think about whether they could do something similar. It introduces ideas about measuring time and distances in standard units.

Talk to the class about the Olympic Games and their history both in modern and ancient times. Talk about the ideas of winning and competition. Get them to try the tasks themselves and look at ways of collecting the information about what they do.

Children could move on to timing each other as they do different tasks and create their own sports competitions deciding on rules for winning.

Some children will need a lot of help to measure lengths and times accurately. Using them in a real context can help them to understand the meanings of the numbers on the tapes and on the clock.

The task Can You Do it Too? offers a similar opportunity, but in the context of measuring distance using non-standard units.