Investigate circuits and record your findings in this simple introduction to truth tables and logic. 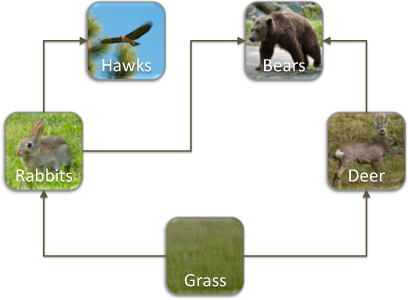 The image above shows a simple food web for this eco-system.
Rabbits and deer eat grass, so there is a transfer of energy from the grass to them, indicated by the arrows.
Hawks eat rabbits, and bears eat both rabbits and deer, similarly indicated by arrows.

If the deer started to reproduce rapidly, there is probably no danger of there being insufficient grass, since there is ample grass in the ecosystem.
However, more deer would mean there was a plentiful supply of food for the bears, so they would also increase in number.

If enough rabbits migrate, there would be insufficient food for the hawk population, leading to a decrease in hawk numbers.  If there was a simultaneous decrease in the deer population, then the bear population would be seriously threatened.

If the bear were hunted by humans, they would be in severe danger of extinction in that area, given that there are only 5 of them.  This would be likely to result in an increase in both the deer and rabbit populations, and hence an increase in the hawk population.

The 10 hawks would need 10 kg of food several times a week, say around 40kg per week, or around 6kg per day.  This is equivalent to 6 rabbits a day.

If we ignore the deer, then 206 rabbits a day are eaten by the bears and the hawks.  At this rate, the 2000 rabbits will be gone in less than 10 days, and the bears and hawks will then also die.

50 deer (without any rabbits) would provide food for the bears for about 37 or 38 days.

However, the rabbits will reproduce quickly.  If the 2000 rabbits are half male and half female, then 1000 females could produce up to 800,000 rabbits in a season, if there were no predators.  This is certainly enough food for the hawks, and would also provide more than enough food for the bears, provided they did not eat too many rabbits too soon.  The addition of some deer would probably ensure that this did not happen.