In a snooker game the brown ball was on the lip of the pocket but it could not be hit directly as the black ball was in the way. How could it be potted by playing the white ball off a cushion?

Peeling the Apple or the Cone That Lost Its Head

How much peel does an apple have?

There's Always One Isn't There

Take any pair of numbers, say 9 and 14. Take the larger number, fourteen, and count up in 14s. Then divide each of those values by the 9, and look at the remainders.

Do you think that it will be possible in principle to make a robot camera using nanotechnology which could be injected into a person's arteries in order to see if they are becoming blocked? You will need to consider what size a robot would need to be to move along an artery in the blood stream.

Here is some information to get you started:

Here is an image of blood components taken from http://en.wikipedia.org/wiki/File:Red_White_Blood_cells.jpg 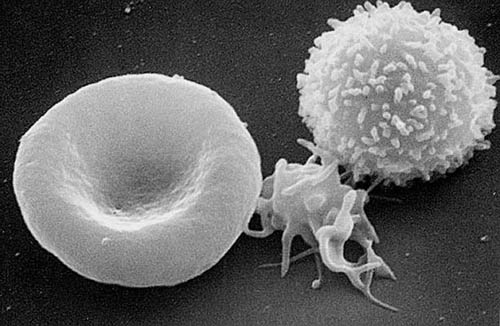