The Lotka-Volterra equations allow us to model a biological system containing a predator and a prey species. They arose in the 1920s due to the independent work of the mathematicians Alfred Lotka and Vito Volterra.

Let x be the size of a fish population and y be the size of the shark population. If the prey have an unlimited food supply and no predators, then they grow exponentially according to the equation $\frac {\mathrm{d}x}{\mathrm{d}t}=\lambda x$ , for some constant $\lambda$.

Note that if either x or y is zero then there can be no predation.

Determining the stability of these equations, requires knowledge of the Jacobian matrix and linearization, which we exclude for complexity.

b) Below is a phasor diagram of the above equations. Try and work out what it is representing. What happens at the red point? 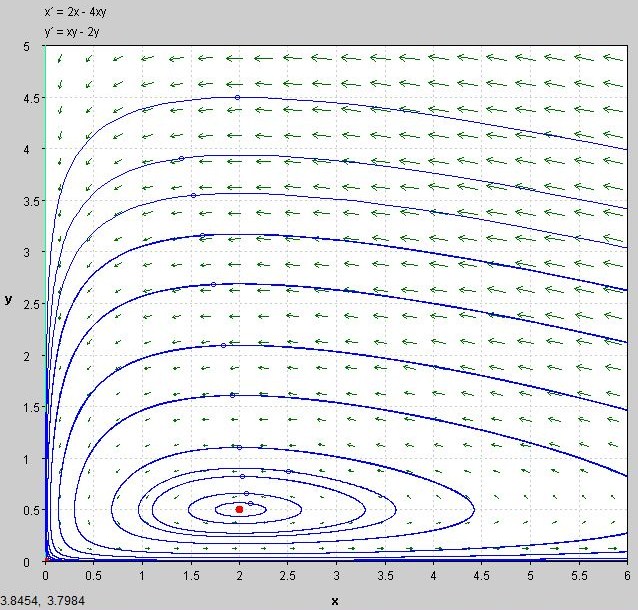 We can also plot the size of the populations against time on the same graph. The graph below clearly shows the dependency of the shark population on a large population of prey, and the oscillatory nature of the two population sizes. 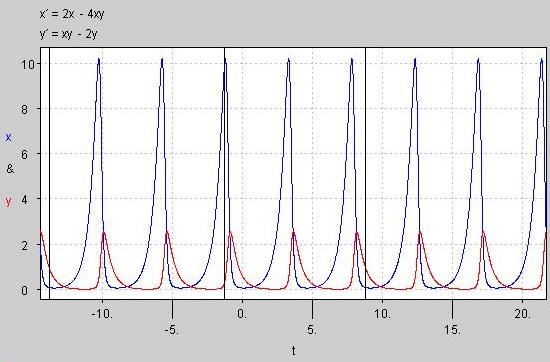 Limitations to our model

In reality if two species coexist, their interactions also depend on the environment they inhabit. This is explored further here. Some of the assumptions made in the above equations are:

Question:   Can you think of any other assumptions we have made in our model?