Looking at the whole issue of problem solving I find that there are many views about what it really means. They seem to include written calculations such as, "5 + 7 = ?", or words are used, "Jane had 5 pencils and her brother gave her 7, how many did she now have?", to something far more complicated in which the problem is multifaceted: "Design a system for traffic lights to operate in, when there is a junction of three major roads and ...".

For the purposes of this article I would like to use the idea that problem solving is something that a pupil becomes involved in when (s)he has to do some extra exploration in order to find with a solution. This means that a problem-solving activity in a class may not always involve problem solving for the most able, who may instantly produce a solution.

Most of the experiences that I have had in which I have observed problem solving have been when pupils have been involved in investigations. Along the way they come across parts that require problem solving and other parts that just flow, as it were, naturally from them.

Let's look at an example, Buying a Balloon: 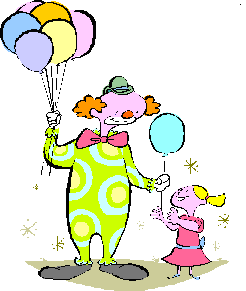 Here is what one group of pupils did (they sent their solution in to NRICH and you can see it in full  here):

So for some this was problem solving as they did not know straight away and had to get some coins and see what was available. Others knew, without cause for extra thinking, but by just remembering.

"We think that if she used just 1p coins she would have paid 6p altogether, which we think is too little for a balloon."

This shows a bit of simple calculation that had an instant answer and then some opinions shared about the cost of balloons.

"We think if she had used £2 coins she would have spent £12 and this was far too much for a balloon!"

The above involved problem solving for some of the group as they worked out how, when you replace one of the 1p coins with the 5p coin, you were taking away 1 but adding 5 and soon they realised that this was just a matter of adding 4. So, what had started as problem solving at this stage was overcome and became a known fact.

"We moved on to using 1p and 10p and realised that the smallest amount would be using five 1p and one 10p making 15p altogether and then replacing a 1p with a 10p meant they would have 9p more! We said that this is a pattern. We explained this as 5 (1ps) and the larger coin and then add 1 less than the larger coin each time."

The fact that they acquired in the previous stage becomes used over and over again, and so generates a pattern. Having seen that there was a pattern, they can use it to move on.

The teacher then divided the group up into smaller groups to look at particular combinations of used coins.

To me, this is a good example of a problem-solving exercise. It gave opportunities for all the pupils to explore something that they did not instantly know the answer to or how to go about solving it.

However, I'd like to stress that the activity became a problem-solving one partly due to the way the teacher behaved. There were very few interventions by the teacher except to organise the pupils into groups and to supply the coins. The teacher avoided:

This helps in allowing pupils to realise that their thoughts are valued and that they are encouraged to think for themselves, and not just remember what the teacher said on previous days.
Some older, more experienced pupils might have instantly known a way of proceeding. They still may have enjoyed the challenge and be pleased to know that they found all the mathematical solutions possible. But maybe for them it was not problem solving. There are different kinds of learners and thinkers in our classroom and some like to get at the answer as quickly as possible and others thoroughly enjoy the processes involved along the way.

Let's now look at another example. Sort the Street. 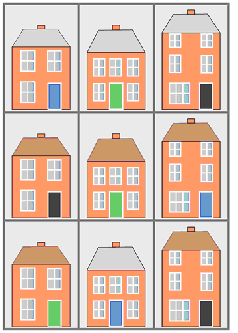 A group of pupils from a First school said:

roof colours          2 groups
door colours         3 groups
floor                      2 groups
window numbers  2 groups
chimneys               1 group
number of doors   1 group
wall colour           1 group
window size          2 groups
number of floors  2 groups
chimney size        2 groups"
A Key Stage 3 student, Gabby, also noticed that you could sort the houses according to the steepness of their roofs. For her it was probably not problem solving.
Now for some pupils the idea of being asked to group some houses together when they will have to decide on the criteria is quite a challenge, in fact a problem-solving situation. I would imagine that there would be a lot of conversation between youngsters and an adult in order for some steps to be taken. For it to be problem solving the adult has to be non-directive and just help the youngster to understand what they are aiming towards.
A further challenge for a still wider range of pupils in Key Stages 1, 2 and 3 comes from Teddy Town.
When I've worked with pupils on a similar activity (see below) I've found that the 9 and 10 year olds do not find this much of a problem. The challenge is fairly easily done and they are happy to achieve a solution. Some pupils are worried that they find solutions which are different and yet still correct. Younger pupils find it to be quite a problem-solving activity. Some try a strategy of placing the houses first so that they comply to the rule of each being different, and then place the teddies. They try lots of times and most will achieve it and a few miss it because they produce a Teddy with a House that gets repeated.
A typical solution may look like: 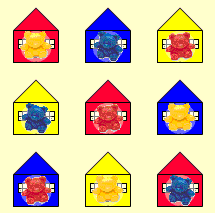 In order for problem solving to take place the teacher has to restrain from intervening and allow the exploration to take place. The challenge then goes further for the older pupils in using four Teddies and Houses of each colour to place on a 4 by 4 grid.
Some pupils will take a piece of paper and try to draw a solution by placing the Houses first and then the Teddies. Much rubbing out occurs because they find themselves repeating some of the combinations of a Teddy and a House. But having not been successful on about the fifth attempt the idea of using something physical to represent the Teddies and the Houses shows a good move in problem solving. I have witnessed others deciding to write down the 16 possible combinations and when drawing the solution will cross out each combination as they use it. This is a problem-solving strategy that they come up with that for them may be original.
Other pupils will have some inkling that they want to use coloured cubes to represent the Teddies and the Houses. They may even go so far as to sort out the 16 different combinations before trying to arrange them in the grid. All sorts of systems are tested out. A row might be put down and then the next, following the rules carefully. Then they find that they can only half-complete the third row and nothing else can be placed. In the problem-solving world they have to decide how far back they have to go, before trying some different combinations. Eventually they get there and come up with a solution, maybe like this one (the smaller square representing the Teddy, the larger one, the House): 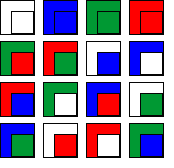 I have always considered it a privilege to sit with children when they are going through a problem-solving exercise like this and see the work that has to be done. In challenges like this it is good to be able to observe the very many different problem-solving skills that are used. It also sometimes shows a pupil that certain known approaches do not always work. For example putting the houses in an array like this: 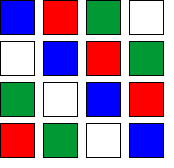 seems to have worked in some previous problems. But in this challenge does not work. The way in which the pupil deals with this can prove to be a valuable learning situation.
I have used a similar challenge, Tea Cups, over one hundred times and youngsters like it. Some have remarked that they liked it being wrapped up in a story because if the challenge were simply put with no story attached they would not be keen to solve it!
This next example is to do with numbers but is not straightforward and so becomes a problem-solving situation for Key Stage 1. The problem is called Birthday Cakes and was published on NRICH in May 2003.
A learner called Alice, who sent her solution into NRICH, wrote:
"First I got 24 lollipop sticks then I fiddled around and sorted out Jack's birthdays and put in Kate's birthdays where they fitted. I had three tries to get it right."
She sent in this picture: