It began in Devon in 2008, with a conversation describing how the Maths Team were keen to raise the profile of mathematics investigations and to go one step further in promoting mathematical thinking and problem solving in primary classes. Having already established a thriving network of Lead Teachers and a 'guided mathematics' project for higher-attaining children across the county, the team believed that getting involved in trialling NRICH resources would complement and enhance existing priorities. So, in November 2008 Liz was invited to Devon to launch 'Enriching Mathematics' with a group of 25 teachers. The aims of the project were:

We began with a problem and Liz drew two V-shapes on the flipchart:

Liz invited the teachers to talk to a neighbour about what they noticed and we shared some of their observations:
"Each one uses the numbers 1 to 5."
"The total of the numbers in each "V" is 15."
"In the "V" on the left, the three numbers on the left-hand "arm" (1, 4 and 5) add to 10, so do the three numbers on the right-hand "arm" (3, 2 and 5)."
Liz picked up on the last point and explained that she was going to define a "Magic V" as one where the left "arm" had the same total as the right "arm". She asked them whether they thought there might be other Magic Vs for the numbers 1, 2, 3, 4 and 5. Some nodded hesitatingly, some nodded vigorously, some looked as if they were thinking ... And so the challenge was set: How many Magic Vs using the numbers 1 to 5 could they find? How would they know that they had found them all?

This problem is called (unsurprisingly) Magic Vs and was published on the NRICH website in November 2008. What we describe above is outlined in more detail in the teachers' notes and it was great to see everyone engrossed in the challenge, no matter whether they were a Year 1 teacher, a Year 5 teacher or a consultant! If you haven't come across this problem before, do take a moment to have a go at it before reading on. What do you notice about Magic Vs? Can you explain any similarities?

The whole-group discussion provided opportunities for us to share solutions and ways of working. We reflected on the mathematical 'content' knowledge we'd needed (addition, subtraction, number bonds, odds/evens ...) and the strategies we'd used to solve the problem (trial and improvement, working systematically, identifying patterns ...) . Liz commented on what she had noticed as the teachers worked: they were talking, listening, making conjectures, working together, testing out theories, explaining, generalising ... . From these discussions, we drew up a list of characteristics of rich tasks and exchanged ideas about the kind of classroom 'climate' that encourages children to engage in mathematics in similar ways.

The teachers agreed to trial some of the investigations and games on the NRICH website with their children and complete evaluation forms, reflecting on the lessons as they did so. These feedback forms were devised using prompts taken from the Devon teachers' reflective lesson study journal. To encourage more teachers to take part, Devon generously provided half a day's supply cover per teacher, up to four teachers per school, Subject Leader briefings were used to introduce NRICH and each Subject Leader was encouraged to try out some of the resources with either their whole class or a group and evaluate them.

Four months later we all met again. Firstly teachers tried out the Factor Lines investigation from NRICH which at that time had little in the way of support materials on the site. Collectively they identified ways in which the format and structure of the resource could be improved and suggested guidance to inform teachers' notes which would accompany the activity.

Following this, teachers shared and discussed their experiences of how NRICH had impacted on teaching and learning in their classrooms, and they pooled information on ways the website might further improve the quality of its support to teachers and pupils. Using the prompts on the feedback forms, teachers were invited to comment on four aspects in particular:


Engagement, challenge and excitement!!
Awe and wonder!
Opportunities for children not usually seen as 'maths stars' to shine
Social learning, improving relationships, respect for others' processes and thinking
Blog or bribe for (teachers') comments!
Video clips from teachers
More recognition of published solutions 'e-certificate'
Attractive interface for children needed (as a separate section) so interactive ones do not have solutions for children
Search alphabetically and by problem title (this facility is in fact already available but it clearly needs to be easier to find!)
They became willing to take a risk
Perseverance developed
Questioning improved, developed enquiry, they were curious!
Lead Teachers took responsibility for the afternoon, giving stimulating presentations about how NRICH had been used in their own class (or school). They talked about examples of problems they'd used and highlighted changes in the ways the children worked and ways that they themselves as teachers had developed. Here, and in the follow-up article, we share some of their examples and comments in the hope that you will be inspired to try the same activities with your own children.


Problems with legs...
Katie and Barbara both teach the youngest children in Rydon and Woodlands Park Primary schools and each felt it important that they should not miss out on mathematical problem solving. Katie explained that she wanted to bring the problems alive for her pupils and so adapted some of the resources she found on NRICH. She combined the ideas in Spiders and Flies and Hubble Bubble to create a problem about 'Wilma the Witch' who was making a potion which contained exactly 10 legs. Katie left it up to the children themselves to choose whatever equipment they wanted to use and she allowed the children to develop their own recording methods.

Spiders and Flies
There were 22 legs creeping across the web. How many flies? How many spiders? (Thank you to Lachlan, age 5, for the picture.)

Hubble Bubble
Winifred Wytsh bought a box each of:

Each box contained 20 jellies. Winifred wanted to make a jolly jelly feast that had 32 legs. How many different ways could Winifred make her jelly feast?


Barbara described how she has become "immersed in NRICH" and has been devising problems which have similar elements to those on the website. In particular, she talked about her link with a school in South Africa which inspired a problem based on different ways of arranging hopscotch. Children took up this task in independent learning time and many made hopscotch arrangements out of 'Duplo'. They were encouraged to notice which were the same and which different, and to record what they had done, which led to counting in ones and twos, identifying and continuing patterns. Some children extended the hopscotch to include more numbers, some drew hopscotch grids on the playground and some programmed the BBot to cover their grids.
Barbara used the NRICH problem Noah:
Noah saw 12 legs walk by into the Ark. How many creatures did he see?
This photo captures the display of children's work: 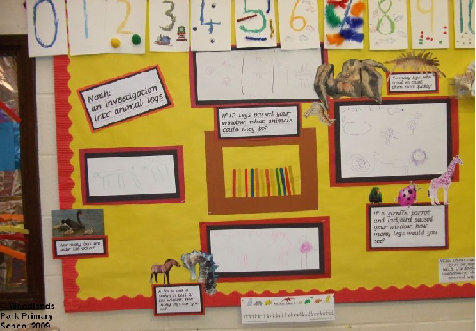 Digit problems
Anna from St Andrew's Primary School told us about working with a group of Year 2 higher-attaining children on the Two-digit Targets problem, adapted from a BEAM Maths of the Month activity.

Can you arrange these digits in the five boxes below to make two-digit numbers as close to the targets as possible? You may use each digit once only Anna wanted something that would generate talk and require the children to apply their knowledge. To begin with, they had a go at the challenge cooperatively in pairs. Then they played it as a game with one child against the other. However, in this game situation, each wanted to play strategically and so they stopped talking! Anna moved on to Four-digit Targets.

The idea is to arrange these digits in the five boxes to make four-digit numbers as close to the target number as possible. You may use each digit once only. This time she encouraged one pair to play against the other pair and in this way, they talked to their partner about what to do as they planned their strategy. The children were happy to change their minds and move the numbers around to get as close to the targets as possible. Having digit cards to manipulate gave them this freedom, whereas usually they would have been very keen to get the 'right' answer. Anna felt that the problem deepened their understanding of place value.

Anna concluded that the problem/s provided great opportunities for mathematical talk and produced high levels of engagement. The children became more familiar with large numbers and were able to transfer their knowledge of number properties (e.g. odd/even, multiples) to these larger numbers.

In the follow-up article you can read more about the project and learn how Jayne, Amy and Justine embedded creative mathematical activities in their classrooms.


This article first appeared in Primary Mathematics, a journal published by The Mathematical Association.