A space craft is ten thousand kilometres from the centre of the Earth moving away at 10 km per second. At what distance will it have half that speed?

Follow in the steps of Newton and find the path that the earth follows around the sun.

A particle moves in a straight line under the action of a unknown force and its motion is observed in various situations.

The position $x$ of the particle is plotted against its velocity $v$ for the motion in the following 6 cases.

In each case, what can you say about the motion of the particle?

In which way does each travel along the curve?

Can you think of a plausible physical interpretation for each?

What can you deduce about points corresponding to equal time intervals of the motion? 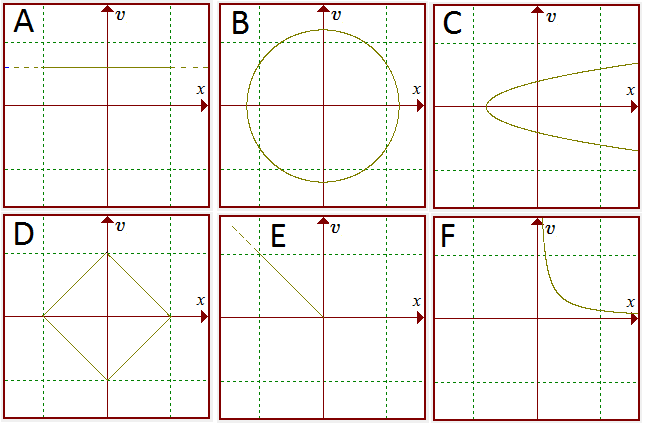 Next consider the velocity-position diagrams for the following situations:

1. A rubber ball dropped perpendicular to a hard concrete floor (if you know about coefficients of restitution, you could draw this motion accurately for $e=0.7$, neglecting all friction and air resistance).
2. A large parcel dropped from a stationary and very high helicopter.
3. An air hockey puck struck hard and perpendicular to a side on an air hockey table.


Extension: Think more generally about the meaning of velocity-position diagrams and the relationship to speed-time diagrams.